Moving into the final 36 hours of the most competitive state election in Sarawak thus far, Pakatan Rakyat is bracing itself for its toughest challenge yet in the 10-day campaign - money politics in the rural constituencies.

It is open secret that the resourceful BN will dish out election goodies to the rural voters at the eleventh hour of the campaign, a tactic that Pakatan has no means of countering.

A kapitan from an Iban-majority constituency in the Sri Aman division claimed that BN campaigners would distribute money to voters in Iban longhouses on the night of April 15. 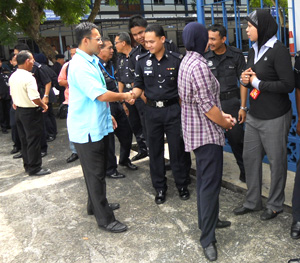 "I heard that this time they will give RM50 to each voter," he told Malaysiakini today, adding that the amount would be enough for many Iban voters in his area, who only earned RM100 to RM300 a month, to bend to the BN.

"I compiled the voters' list in my area last month and gave it to the BN agent. They will distribute the cash according to the list, either today or tomorrow. I still need to do some updates to the list," said the kapitan , who requested anonymity, fearing reprisal from the authorities.

A kapitan is the Chinese community leader appointed by the state government on the recommendation of the BN's elected representative, and enjoys a monthly allowance of RM850. In the Iban community, this person is referred to as the tuai rumah .

The kapitan also revealed that personnel from various government agencies, including the police, those in its Special Branch and the military, would station themselves in the longhouses from today and tomorrow, until the polling day.

"Usually they will be stationed at longhouses that have more voters and those with stronger anti-government sentiments. They will stay until polling day and take the voters to the polling stations.

Using both carrots and sticks

"They use both carrots and sticks to fish for votes, including intimidation, persuasion and money. They also stop the opposition from entering longhouses. The Chinese call this the strategy 'shut the door to beat the dogs'," he said. 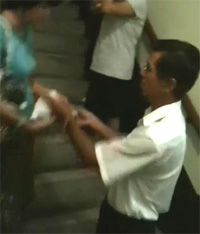 "Is is not easy to counter money politics. We can only hope that the voters will change their attitude this time," said PKR Kajang assemblyperson Lee Kim Sin, who has been campaigning in Batang Ai, an Iban-majority seat contested by Sarawak PKR election director Nicholas Bawin.

Lee said PKR would continue with its normal campaign, and continue to visit the longhouses that party campaigners have still not done.

On its part, the DAP is said to have sent "spies" into Iban longhouses in constituencies the party is contesting in order to collect evidence of vote buying.

Besides doubling their efforts in house-to-house visits and monitoring money politics, opposition party members campaigning in many of the seats are also said to be struggling with "different kinds of challenges".

However, the opposition found that the strong momentum created in urban constituencies has spread to the Chinese voters in semi-rural areas, especially regarding the alleged corruption of long-time Chief Minister Abdul Taib Mahmud. The 1,000-strong opposition ceramah in Sri Aman town last night, the biggest since nomination, was a testimony to the anti-Taib sentiment.

The opposition is hoping the swing among Chinese voters could nullify the surge of BN’s support among the residents of the interior.

Meanwhile, Deputy Prime Minister Muhyiddin Yassin denied all allegations of vote-buying by Sarawak PKR chief Baru Bian who claims that votes are being bought for several thousand ringgit per voter in Ba'Kelalan, saying that the BN has always stuck to the rules.

" Biasalah you (That's typical of you to ask that), I think people here won't buy these kinds of allegations. The BN has never done so, and I don't know if the opposition is doing so out of desperation, although I'm not accusing anyone. We never break the rules," he said.