The government's solution to resolve discontent of the Christian community in releasing the Malay-language Bible was a "political move" without consideration of the legal provisions in light of tomorrow's Sarawak state election.

Pembela, a coalition of Muslim groups, protested against the action to release some 35,000 impounded copies of Al Kitab, the Bible in the Malay language, after Friday prayers in Masjid Negara this afternoon.

This was despite Prime Minister Najib Abdul Razak's pledge that his government would no longer sequester the Bible. 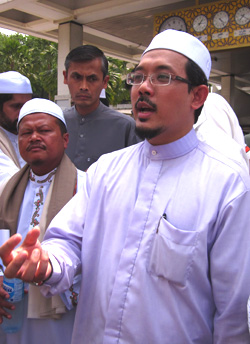 “The issue of the Bible (in Malay) should be resolved by way of the constitution and should not be resolved in accordance with the election timetable,” said the umbrella group's spokesperson Yusri Mohamad ( right ).

“Clearly the Bibles were released because of the election. The government should delay the matter and keep to procedures, including the disposal of the appeal in the Federal Court on the use of the word ‘Allah’,” he told reporters after the protest.

“This gathering was not (only) specifically on the Bible, but rather to defend the sovereignty of Islam... we object to the spread of the Bible in the Malay language,” he said.

Pembela, made up of 19 Islamic NGOs, is set to go all out against the use of the Al Kitab as it believes the government is being cowed by Christian groups. 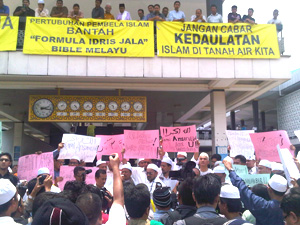 The 20-minute gathering was left alone by the police though they did not have a permit from them.

‘Al Kitab released in a hurry’

Najib’s administration has been allaying discontent among non-Muslim groups following the Home Ministry’s move to hold back 35,100 copies of the Al Kitab at Port Klang and in Kuching Port.

With Sarawak, the country’s biggest state and having the largest number of Christians, going to the polls tomorrow, the government even presented a 10-point resolution to put the issue to rest. 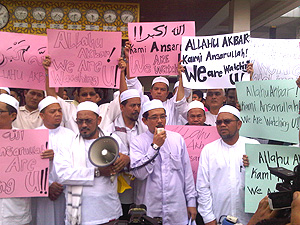 The solution included an agreement to allow the import of the Bible in any language, including Malay and Bahasa Indonesia, without restriction.

Yusri chided the minister’s formula for being made in a “hurry” and “sidelining principles of the constitution”.

“It looks like there is a tendency for certain groups to make excessive demands to what is not rightfully a religious right,” he said, adding that the majority of the electorate are Muslims.

He urged the Muslim community to “reject” any leader who “compromises” the sanctity of Islam in Malaysia.

“Pembela believes that beneath these issues are hidden missions to expose the Muslim community in Malaysia to apostasy, or at the very least inoculation of religious pluralism, secularism and extreme-liberalism, which can erode the integrity of the identity of Muslims,” said Yusri.

Idris’ quick-fix, however, was also criticised as incomprehensive and a short-term solution by Christian associations.

This is because it stipulates separate rules for Christians in the peninsula and in Sabah and Sarawak, and does not address frustration over the legal tussle in prohibiting non-Islamic publications using the word “Allah”. 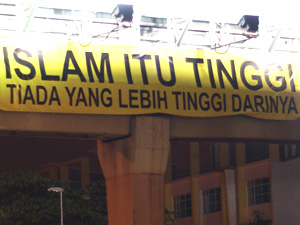 Yellow banners similar to those displayed at Pembela’s protest today was also found hanging from a pedestrian bridge near Zoo Negara in Hulu Kelang yesterday.

Yusri confirmed that the banners hung belonged to Pembela.