Down the road from swanky condominium blocks in the newly-christened Bangsar South is a house of plywood and zinc walls, with Arabic written in black marker across its entrance.

And in this tiny house lives, according to the authorities, a threat to national security; or at least until several days ago. 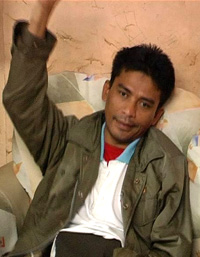 On April 1, several police personnel descended onto the small house and left with someone they believed is a bombmaker, a 43-year-old disabled man Kadir Hashim ( left ).

What followed, said the man whose left wrist and right thumb are just stumps, was 21 days of questioning under the Internal Security Act (ISA).

“I was prepared to go (into imprisonment) for two years or more. I knew I didn’t do anything wrong and that I would eventually be set free. If it was after two years then I was ready to answer them for two years.

“Of course I thought of my family, but I think the only thing I would have hated about being behind bars for two years is missing a mass uprising in Malaysia like in the Middle East… if it does take place,” he said.

Matter-of-fact about his experience of being detained under one of Malaysia’s most despised laws, Kadir, met when he received a visit from PKR Youth yesterday, said that some of the questions the police had thrown at him during detention were “like a joke”.

“I’m disabled. How would I make bombs?” he asked during the seemingly light-hearted chat with PKR Youth at the home he shares with his frail mother ( above ).

In fact, some friends joke that the closest the diminutive Kadir had ever come to explosives was at the age of eight, when he lost his hand and half a thumb while playing with fireworks. 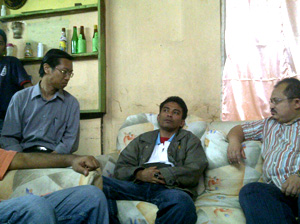 While it is uncertain why the police took him in that day, Kadir hints that it could be due to his angry anti-government postings on his two Facebook accounts; some supporting armed resistance in the manner of guerrilla warfare.

In one of the Facebook accounts, Kadir who runs a tomyam stall full-time, perhaps half-jokingly states that he is a "part-time guerilla", but his obvious lack of knowledge on weaponry would have given him away.

“(During the interrogation) the police brought in three cases of firearms and asked me to identify them and to tell them what kind of bullets are required. I’ve only ever seen firearms on television,” he shrugged.

‘Tell your friends ISA is good’

According to Kadir, he was taken to several police stations blindfolded and made to undress and searched at every station, before ending up at an unknown detention centre where he spent the first half of his incarceration in a bare cell. 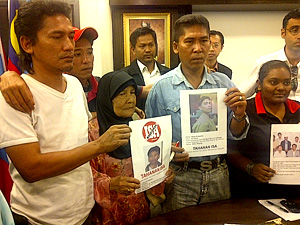 “There was no mattress or pillow, just a floor to sleep on. I’d have to leave my cell to bathe, and when I did so I had to be blindfolded.

"I also needed to climb four flights of stairs up to the investigating officers’ (IO) room for questioning every day.

“Later they moved me to a cell in the same building as the IO’s office, where there was a mattress and a pillow.

“I no longer had to be blindfolded when I left the building, and I was served my food in the IO’s office… good food, biryani and all that. But I had no appetite,” he said, adding that he was not physically harmed.

If the prospects of living behind bars for the next two years was not enough to put him off food, the line of questioning did. 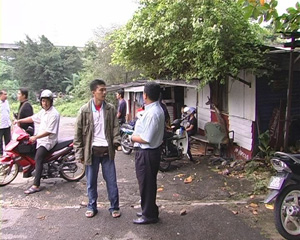 Kadir, an active Kerinchi PKR branch member of several years, said police had questioned him about his political activities, about members of the party branch, his links to several youth leaders in the party as well as the allegations against PKR de facto leader Anwar Ibrahim.

“They asked me about the sodomy case, the sex video… tried to convince me (that Anwar was guilty) but I told them if he is then let the courts decide.

"I don’t want a leader who is guilty of such crimes either, but at this point I don’t believe it,” he said. 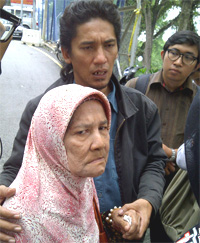 Kadir said that ironically one of the deals they offered for his release was for him to preach the virtues of the ISA to his PKR friends.

“I asked them, ‘Do you think they would believe me if I did that? They’d just believe that I’ve become a turncoat’. Maybe I could try to convince my family that it’s good,” he said, laughing with his family.

During his detention, Kadir’s family rallied hard for his release, especially his brother Muda who had given the police an earful upon his brother’s release.

On the last day of detention, Kadir claimed that he was told that Home Minister Hishammuddin Hussein had denied his release and that he would be imprisoned for two years.

“I just laughed because I was sure I was going to be set free,” he said. 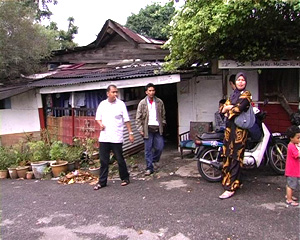 And as suddenly as he was arrested, Kadir was dropped off at his house at 4pm on April 20, without any conditions.

“They asked me not to be involved in politics anymore but nothing was in black and white. I didn’t sign anything. This government seems unable to take criticism (so) I will continue with my struggle, this is just part of the challenge.

“But I do have one piece of advice. Slam the government if you want but steer away from using the words ‘bomb’ or ‘guerilla’ even jokingly, because then the police will have to do their job and stake you out and catch you.

“They’re sensitive when it comes to anything to do with firearms,” he said, flashing a smile.