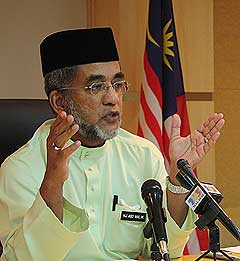 Abdul Malik said the election would go on despite the fierce protests from Umno as the procedure was in compliance with Section 22(4) of the Penang Islamic Religious Council (MAIPP) enactment.

"So if anybody wants to challenge this, you are welcome," said Abdul Malik, the assemblyperson for Batu Maung.

"Those who cannot accept improvements that benefit the people and the Muslim community surely cannot accept this change," he added.

Several groups have shot down the new procedure under which mosque committee members would no longer be selected by the Penang Islamic Affairs Council (MAIPP) but elected directly by their congregations.

In the frontline of the protest is Umno, which has accused the DAP of interfering in the Islamic affairs of the state.

Umno also hit out at the state government for intending to split the Muslim community and allow politics to seep into the congregations.

MAIPP has also been strongly criticised for insulting the Yang di-Pertuan Agong, with Umno and Muslim NGOs insisting that His Majesty's approval of the new election system was necessary before implementation in the state.

However, Abdul Malik said NGOs aligned to Umno were trying to "exploit" the issue and by trying to drag the Agong into the matter, they hoped to make the Malays increasingly angry with the Pakatan Rakyat state government.

"Actually, only the selection format has changed,” he said adding that previously, mosque committees were selected just by the raising of hands, but now it would be done through voting of candidates offering themselves to serve.

Mosque committee members were all along picked without the views of the mosque congregations considered, said Abdul Malik, “but this time we ask them to suggest names for their own committees to MAIPP, which will then be endorsed by the king".

No meddling from DAP

Abdul Malik said Umno had politicised the issue by slandering DAP, accusing the party of "interfering" in the administration of Muslim affairs.

He reiterated that the new procedure was solely the decision of MAIPP, without even an iota of meddling from any DAP leader.

"I am confident that the 4,485 people who offered themselves to fill 4,530 posts in 151 of the 200 mosques in the six districts of Penang intend to work together with the state government to uphold Islam," he said.

The 151 mosque congregations that agreed to hold the elections will vote in their committees at their annual general meetings, while the remaining 34 will not hold elections at their AGMs.

A total of 59 main posts were unchallenged while eight mosque congregations did not submit their nomination forms.

Abdul Malik said it was clear that Muslims in Penang were ready for a change that would benefit their community.

"The ones not ready for change are Umno and Malay rights pressure group Perkasa, which are anti-change, because they have always been very rigid in their thinking," he said.

"That is why they blindly protest against any change by anyone other than Umno... although at the end of the day, they will be copying the same thing," he added.

He gave the example of Umno protesting against the PAS-led Kelantan government for introducing the five-day work week.

Umno had then accused the state government of being lazy and for reducing work productivity, he said.

"But not long after that, the federal government too implemented the five-day work week," Abdul Malik added.