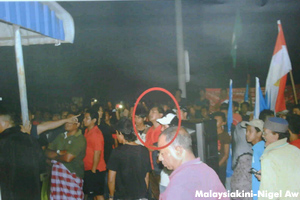 Mohd Shohaimi said his aide Asrullah Effendi Abdullah had tried to grab the microphone from the PKR parliamentarian to stop her from speaking, as the mob was getting out of hand.

“I understand that he was leading the group of youth protestors and things started to get out of control, so he went up the stage to protect Nurul Izzah,” Mohd Shohaimi said when contacted.

“He wanted to save her before the youths stormed the stage. So he grabbed the microphone to stop her from speaking. He was afraid, as he would be responsible for any untoward incident.”

Nurul Izzah had lodged a police report yesterday alleging that a man, who was among of a group of ‘thugs’ trying to disrupt a PKR event in Felda Lepar Hilir, Pahang, had tried to attack her.

However, eyewitness and PKR’s Seri Setia assemblyperson Nik Nazmi Nik Ahmad had claimed that Asrullah did not appear to be going for the microphone.

“He attempted to hit her or wrench her tudung. Not sure about the microphone snatching,” he said in a text-message to Malaysiakini today. 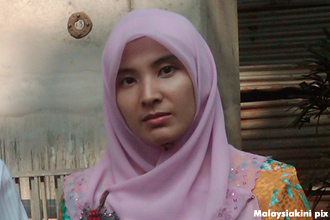 Nurul Izzah said that Asrullah, who PKR claimed had been photographed that night, “lunged” towards her “in an alarming manner” while the demonstration “emcee kept shouting insults and berating (her), Nik Nazmi and (PKR)”.

“I reject Umno's attempt to whitewash this incident. Their defence of such thuggish behaviour is a sore disappointment to all of us,” she said when contacted.

Denying Umno's involvement, Mohd Shohaimi, who admitted that he was not at the event, said the group was made up of “locals who felt called to take part” as they were “angry”.

“The main issue is the Koperasi Permodalan Felda issue, where the settlers here feel that the opposition has stopped from from getting a windfall from the Felda Global Ventures Holdings listing,” he said.

Mohd Shohaimi, who said he “supported” the demonstration against the “those who attack Felda” added that Umno members' presence does not mean the party has endorsed it.

Asked why the demonstrators carried Umno flags, he said that this is “normal” as the other side had raised PKR flags.

“Why would they raise PAS flags? That wouldn't be suitable. They can't raise Felda flags either as this is a political matter,” he said, adding that there was no violence as claimed by PKR.

Jokingly, he added: “I won't be surprised if Nurul Izzah or the local PKR leader will suddenly sport a black eye or a cast tomorrow.”

He also claimed that locals had lodged a police report against PKR's plans prior to the incident to show their displeasure. 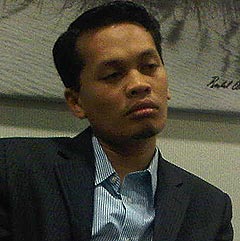 When contacted, Kuantan OCPD Mohd Jasmani Yusoff could not confirm the police report as he is currently attending a seminar in Kuala Lumpur.

“But the matter is currently investigated under Section 148 of the Penal Code for rioting,” he said.

Meanwhile, Nik Nazmi (left) said that they had planned to speak on Felda matters that night, but could not as the event was disrupted.

He, however, said speakers who spoke before him and Nurul Izzah arrived may have touched on the subject.

A history of violence, Umno-style

Tan flabbergasted by savvy of burglars

When silence is consent to brute force