“It was very early, about 2am. I was sleeping and we heard a rapping on the gate,” said veteran journalist Nuraina Samad, looking into a distance, as if returning to her 20-year-old college girl self, asleep and safe in her parents' home. The year was 1976.

Her older brother went out to investigate and found men saying they were from the police Special Branch, demanding to be let in and who later ransacked their father's room.

“I remember seeing one of them pulling out a book by Pearl S Buck. I remember thinking 'Why is he picking that book?'” said the camera-shy New Straits Times managing editor. 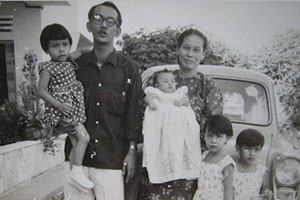 At the end of two hours - “I remember it being a long time” - the men said they were taking her father, A Samad Ismail, then deputy editor-in-chief of the New Straits Times , away under the Internal Security Act.

It would be about two months before she saw her father again. But this time, only on television, on the 13th floor of the Mass Communications wing at the then Institut Teknologi Mara (ITM, now UiTM), in a room where she was supposed to have a night lecture.

“Inilah manusia bernama Samad” (This is the man called Samad) The gall! I was so angry that they were treating Bapak like that. And when my father spoke... he didn't usually speak like that,” Nuraina said.

It was one of two televised confessions that Samad would be forced to make during his five years under the ISA.

Nuraina has since realised that her father put on a different accent to “put a number” on his interrogators and to let his loved ones, whom he was not allowed to meet, know that it was all a show.

But recalling that day in her blog, which she began penning in 2007 to sort out hidden memories which spilled out “like ribbons”, Nuraina wrote that she stormed out of the lecture room, incensed with then home affairs minister Ghazali Shafie.

In the same post, she would recall the day she was called an anak komunis (communist's daughter) by a stranger on campus, and how she gave chase, wanting to sock the person who had taunted her in the face.

“Would they be calling Lalin and Nina that too? Azah and Kamal?” she wrote in the post, recalling how protective she was of her younger siblings.

Nina, the youngest of the lot at only six at the time, too, was a victim of such taunts.

“She was in Standard One... She took the school bus and in the bus somebody said, “Ini anak komunis!” (This the communist's daughter!) and she almost punched that boy.

“She was crying. So my mother took her out of the bus and started sending her to school by car. My mother told her it's okay. I always believe this is how one should explain (things) to children: 'Some kids are just not nice',” she said.

“Normal on the outside”, Nuraina vented out in her own ways, writing term papers advocating the repeal of the ISA because it could be abused by politicians, believing that her father's “set up” was evidence of such abuse. 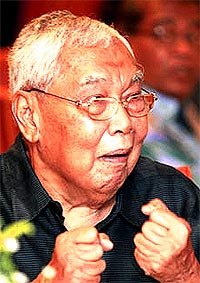 “To cut the story short, it was a lot of bull. (Then Singapore prime minister) Lee Kuan Yew, well, now I can say he was behind it. I can say that Ghazalie Shafie ( left ) was behind it.

“It was connected to the Malaysian political intrigue... I can tell you it was set up,” she said.

Nuraina, who started working for the NST when her father was in detention, was so angry with Ghazalie, also known as King Ghaz, that she never covered any event where the minister was present.

“I told my bosses, 'Don't send me to any of his assignments because I could do some criminal thing.' I don't know if they really believed me, but maybe they thought I was so angry that I might,” she said.

But that was as far as Nuraina would go in describing her hatred for King Ghaz, out of respect for the dead. He died in 2010, two years after Samad.

Letter to the PM

According to an obituary written for Samad by his contemporary Lim Kean Chye, the two friends were Singapore's Berita Harian editor Hussein Jaiddin and the daily's reporter Azmi Mahmud.

The duo were arrested in Singapore in June 1976 and confessed to being part of a communist plot to undermine the governments of Singapore and Malaysia, and had implicated Samad.

Lim also wrote that Samad's detention was linked to Dr Mahathir Mohamad's appointment as deputy prime minister, sidelining then DPM hopeful Ghazalie, who held the powerful post of home minister and sought to use the ISA arrests to undermine his key rival.

It would be DPM Mahathir who signed the letter allowing Nuraina and her family to visit their father at the Jalan Bandar police station, months after his arrest. The meetings took place every Tuesday after that.

Mahathir had responded to a “heartfelt” letter written by family friend and laureate Usman Awang (“we called him Pak Cik Tongkat”) requesting that the family be allowed to meet Samad. It was addressed to then prime minister Hussein Onn. 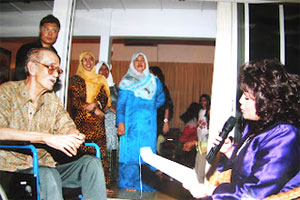 Samad ( far left ) was not held at the Kamunting detention camp but at a house, the location of which he never disclosed to his children, even after his release.

“When we saw the letter we thought, 'That's it. If we still can't see Bapak after this, they are really cold hearted.' The letter was so touching, in Pak Cik Tongkat's own way. He was like a father to us,” Nuraina said.

Unlike today, she said, families of those held under the ISA then had no support from lawyers or civil society, and were mostly left to their own resources.

“The situation was such that nobody dared (to do anything). There were no likes of Ambiga (Sreenevasan) or Haris (Ibrahim)... or Malik Imtiaz.

“There were no advocates to support us. People are luckier now. If they were arrested under the ISA, the whole country would back them up. You could see that in 2006,” she said.

So “fatalistic” was the mood of the family upon Samad's arrest under the ISA that Nuraina said there was even a time when she thought her father would be locked up forever.

It was her mother, Hamidah Hassan - who was at one time the face behind Berita Harian 's long-running agony aunt column Cik Sri Siantan - who kept the family grounded.

“My sisters were working. If they weren't, I cannot imagine what my mother would have gone through.

“My father's EPF could barely pay for the house... Journalists are terrible financial managers. We realised then that my father's financial accounts were in a mess,” she said.

Looking back, Nuraina said she could not imagine how her mother, who had stood by her father when he was incarcerated, could have survived the experience. 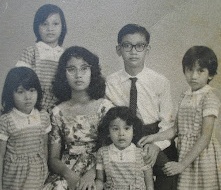 Her mother did not move for a long while after her father was taken away but when she did, she told her children that their father would be home soon.

“When you are young, you don't see. She's the mother, she's supposed to be strong. Now you wonder how she could have done all that, gone through all that,” Nuraina said.

While she and her siblings coped through art, music and dance - Nuraina is a trained dancer - it was their mother who taught them the power of forgiveness.

“It's just like as we go through life and she would talk about good things. This happens, but let's not suffer. Believe that they made a mistake, my mother would say,” she said.

Hamidah would tell her children to believe that those who were wronged would be “saved by God” and those who did wrong will suffer more.

“It wasn't about hate, hate, hate and anger. No. Or else we would have gone crazy.

“We were so young and there was still time to teach us about other things that we could hold on to,” Nuraina added.

This interview is part of Malaysiakini's focus series on the Internal Security Act leading up to its repeal, which is expected to be tabled during the current sitting of Parliament.

Torture, suicide and 47 days of hunger

Read more from this author :
Aidila Razak
Read more like this :
#isa
Most Read
Most Commented
Most Recent