ANALYSIS The Parliamentary Select Committee on Electoral Reform report, which was released earlier this week, highlights 22 recommendations on how to improve the electoral process.

I will not go through each and every recommendation or discuss the overall quality of these recommendations since others including the Bar Council chairperson and the Bersih steering committee have already done so. 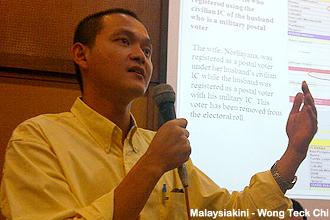 What I will focus on in this two-part article is the many problems which are to be found in the electoral roll. To summarise, the report fails to acknowledge significant problems that have to do with the electoral roll, many of which are already well known, and seems to limit the scope of checking the accuracy of the electoral roll to a few not very useful parameters.

Section 10.6 of the report recommends that an independent agency such as Mimos (Malaysian Institute Of Microelectronic Systems), under the supervision of a newly-established PSC, be given the responsibility of checking the accuracy of the electoral roll.

Unfortunately the examples listed in Sections 10 and 11 of the report are not wide-ranging enough. For example, Mimos was given the task of checking to see if there are duplicate IC numbers in the electoral roll. Not surprisingly, this search failed to turn up any such entries.

As will be clear later in this article, these are but some of the methods in which the electoral roll can be manipulated and abused.

For these cases, the report recommends that the Elections Commission (EC) display these names in public so that the voters in question can come forward to help EC clean up the electoral roll in these addresses.

These problems may be unintentional administrative errors or they may arise as a result of purposeful fraud. Both types of problems need to be addressed.

But systematically identifying and addressing these problems require a lot of resources not just in terms of time and personnel, but also in terms of computing power and knowledge.

The problems which will be highlighted in these two articles were uncovered as a result of an ongoing academic study called the ‘Malaysian Electoral Roll Analysis Project (Merap)', whose purpose is to identify problems with the electoral roll and to make recommendations on how to deal with them.

These results took three part-time researchers approximately three months to compile. These findings are not exhaustive and are possibly only the tip of the iceberg of the underlying problems with the electoral roll.

A total of 10 problems with the electoral roll will be examined - five in this first part and another five in the second part.

2) Inconsistencies in the gender indicated by the IC number and EC data.

4) Voters who have IC addresses with the state of birth as ‘7x', indicating that they are born overseas.

6) Postal voters who are registered using their regular ICs.

7) Spouses of police who are registered as postal voters.

8) Spouses of army/police voters who are of the same gender.

9) Army and police voters who are above the retirement age.

10) New army and police postal voters who are above the recruitment age.

This is not to say that all of these voters are fraudulent voters that have been included in the electoral roll by irresponsible parties. Rather, the number of elderly voters is a good place to start in terms of identifying voters who may have died but for whatever reason, have not been deleted from the electoral roll.

This is an area of concern since the ICs of dead voters can be used by others to cast a vote on their behalf.

This voter is registered in Setiawangsa in Kuala Lumpur. It is possible this could be typo and that the voter was born in 1953 rather than 1853 but this needs to be verified.

The EC would probably respond by saying that they rely on the National Registration Department (NRD) to provide them with names of recently deceased people who then can be deleted from the electoral roll.

But there is nothing to prevent the EC from conducting their own periodic investigations on voters, especially those who are above 100 years old, to ensure that these voters are still alive and residing in their voting constituency.

2. Inconsistencies in the gender indicated by the IC number and EC data

An analysis of the 3Q 2011 electoral roll found 15,855 voters whose IC numbers indicate a different gender from that listed by EC.

These ‘gender inconsistencies' point to the possibility that a person of a different gender could have used these ICs to register themselves as voters.

While these instances could be legitimate errors on the part of NRD, it makes sense to conduct more analysis, including field visits and discussions with NRD to ensure that these are merely clerical errors.

In addition, the presence of these sorts of inconsistencies also raises the question on whether polling agents can object to the identity of these voters on the basis that their listed gender differs from that indicated by the IC number.

These sorts of inconsistencies also highlights the need for NRD to get more involved in the process of clarifying these inconsistencies and discrepancies and play a more pro-active role in helping the EC maintain a clean and updated electoral roll.

Many Malaysians share the same name and as such many same/similar names are bound to appear in the electoral roll.

But when Malaysians with the same name and the same or similar date of birth appears, often in the same constituency or in the same state, this should certainly raise concerns.

The presence of such voters raises the possibility that they have been issued more than one IC number in order for them to vote multiple times.

Among the 369 "Fatimah binti Ismails", 10 pairs were found to have same/similar date of births.

Among the 346 "Fatimah binti Abdullahs", 13 pairs were found to have same/similar date of births.

This seems like too much of a coincidence especially when one considers that Terengganu experienced a significant percentage increase in the number of voters from 1999 to 2004, after the state fell to PAS in the 1999 general elections.

This example illustrates how conventional methods of data mining conducted by Mimos for the PSC on Electoral Reform are insufficient to detect problems in the electoral roll.

More refined searches such as looking for same names with similar or same date of births (the first six digits of the IC number) are required.

4. Voters who have IC addresses with the state of birth as ‘7x', indicating that they are born overseas

Voters who are not born in Malaysia have ‘71' as their 7th and 8th digits in their IC number. There has been much speculation that non-Malaysian have been given citizenship and hence, voting rights, in order to have them vote for the ruling government.

Malaysiakini recently reported on a certain 'Mismah' being originally listed as a permanent resident and registered as a voter and then later being listed as a citizen in the NRD website.

A preliminary analysis of the September 2011 electoral roll for voters in Selangor turned up 30 voters with ‘Indonesian' sounding names (only one name). For example, Juwairiyah (IC: 560317715158), is a ‘71' voter in the Gombak parliamentary constituency.

Table 1 below shows the full list of these 30 names.

This is not to say that those who the digits 71 in their ICs and who appear on the electoral roll are necessarily suspicious voters. But the precedent of illegal immigrants in Sabah, many of them from Indonesia and Philippines, being given fake ICs to register as voters should make one especially wary of such cases.

Our findings are thus only a small sub-sample of this larger dataset. While many of these names are of Malaysian citizens born in China and India, much more in-depth analysis needs to be done in order to ascertain the percentage of voters among this dataset, which are legitimate citizens and those who have been given IC numbers through less than legitimate means.

One would not expect that voters who are newly registered in Kuala Lumpur or Selangor would still be registered in addresses without house numbers.

For example, according to Table 2 below, Syahrul Ali Mansur (IC: 691023715099) is a newly-registered voter in 3Q 2011 in Kampung Puah, which is in the Wangsa Maju parliamentary constituency.

Table 2 also lists nine other newly-registered voters in 3Q 2011 in the same locality which do have house numbers.

Voters who fall into this category are still being compiled from 3Q 2011 and 4Q 2011 in Kuala Lumpur and Selangor.

In Part 2 of this article, five problems which have to do with postal voters will be examined in greater detail.

ONG KIAN MING holds a PhD in political science from Duke University. He is currently a lecturer at UCSI University. He can be reached at [email protected]