The police should investigate allegations of confidential defence documents being leaked and sold to a foreign country. And a senior officer should lead it, preferably deputy inspector-general of police Khalid Abu Bakar.

Former Kuala Lumpur CID chief Mat Zain Ibrahim told Malaysiakini taking into account the nature of such an allegation, the probe should have been initiated in 2006 when Mongolian national Altantuya Shaariibuu was murdered. 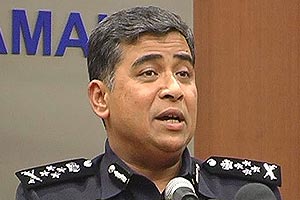 The police, he said should form a high-powered team led by no less an officer than Khalid ( left ) himself.

"Under section 3 of the Police Act, 1967, the police are tasked with maintenance of law and order, the preservation and detection of crime, the apprehension and prosecution of offenders and the collection of security intelligence," Mat Zain said.

In gathering security intelligence, the police must uncover how such information could have been leaked and the force is the right authority for such a task. They should start the investigation on their own initiative, he said.

"It is not necessary for them to wait for a police report to be lodged," added the former top cop. 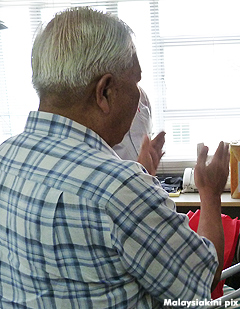 Mat Zain, who has been trying to keep a low profile since his retirement a decade ago, expressed his views in an exclusive interview at the Malaysiakini office recently. He, however, declined to have his full picture taken for security reasons.

Defence Minister Ahmad Zahid Hamidi, was reported in Friday's Berita Harian as having denied such a sale.

Mat Zain's response to this was that the minister has no power to declare such information as baseless, as it is the police's responsibility to do so after having carried out an investigation.

Why Khalid should head probe

Mat Zain's reason for naming Khalid as his choice, follows the example in 2009 when then deputy IGP Ismail Omar (now the IGP) led investigations into the murder of 36-year-old Indonesian maid, Mantik Hani.

"Is the IGP or the Home Minister Hishammuddin Hussein trying to say the life of an Indonesian maid is worth more than the security of 28 million Malaysians and the security of our country," he snapped.

He added that Hishammuddin on Mantik's death even declared in Parliament that the cabinet was setting up a special unit comprising various ministries to prevent a recurrence. 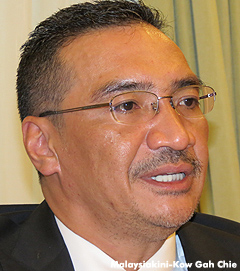 "Why is Hishammuddin ( left ) so silent when it comes to our top secret security documents being sold by a few unscrupulous traitors to quench their greed.

"It's high time that Hishamuddin stopped talking about Bersih video clips and focus instead on the security and safety of the people," he said.

Mat Zain also wants Ismail to prove his mettle by launching an investigations into the incident.

He said both Najib and Hishammuddin should realise that Malaysians are embarrassed by such an expose.

"People in France, Mongolia, Thailand and now Malta and the rest of the world are talking about about our security and our safety being compromised, while our cabinet is busy with other issues," he said.

On whether the Malaysian Anti-Corruption Commission (MACC) should also step in, he said there is no doubt that it is the police's responsibility, and that the MACC can be roped in later should any element of corruption be established.

"The police look after the security of the country while MACC concerns itself with corruption.

"The problem here is that of confidential security documents being leaked out, so it should fall under the police. The MACC can trace who gets the money in selling the secrets.

"In fact, the police should have sprung into action when the Altantuya murder case broke as to how she knew so much.

"This is one of the functions of the police as stated in the Act - gathering of security intelligence. If that has been violated, then you are not doing your job," said Mat Zain frankly. 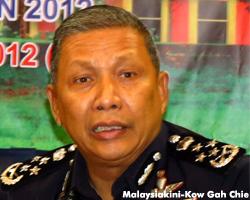 In response to police chief Ismail ( left ) who said that the police should be loyal to the government , Mat Zain said nowhere in the Police Act does it say that the force needs be loyal, or blindly loyal, to the government.

He said in fact the police should not care who runs the government, which party controls it or whosoever rules.

"The IGP is only ‘responsible' to the minister in charge of home affairs and the maintenance of security of the country.

"You can be loyal but not blindly loyal; even if it is a minister who is committing an offence you should arrest him.

"Nowhere is it stated in the Act that the police or the IGP have to be loyal to the government," said Mat Zain.

He said they need not worry over the election date or when Parliament is going to be dissolved - the police needs to be impartial and independent.