While use of the Arabic word for God, ‘Allah', has been a hot topic between Muslims and Christians in the country, a renowned contemporary thinker and philosopher sees discussion on the matter as having been "too simplistic".

Speaking at a lecture in Penang on Wednesday, Prof Tariq Ramadan said that for someone coming from the Arab world, arguments as to whether a non-Muslim could use the word ‘Allah' were "completely out of touch with reality". 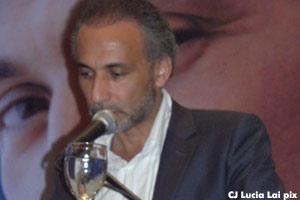 Tariq - who lectures at the University of Oxford in England - said Christians were using the word ‘Allah' much earlier, before the Muslims in Egypt did because, in Arabic, the term means ‘God'.

"When I speak about God, I use the word Allah. It means one God and no other God," he said in the lecture organised by the Penang Islamic Foundation in George Town.

"So, suppose we say you cannot use this word because it is ours, we would be monopolising the word," he told the 500-strong crowd at the two-hour session.

"It also means we are not confident in our language," quipped the influential Islamic scholar, who is a Swiss citizen of Egyptian origin.

In January 2010, Catholic weekly The Herald won its suit in the High Court, which overruled a ban by the Home Ministry on the weekly's use of the term ‘Allah' in its Bahasa Malaysia edition, -which had prompted fiery protests from certain quarters nationwide.

On a three-day tour

The federal government has since appealed the decision of the High Court, which also granted a stay in favour of the Home Ministry to stop The Herald , from using the word 'Allah', pending an appeal by the ministry.

Tariq - who is the grandson of Hassan Al-Banna, the founder of the Muslim Brotherhood - was on a three-day lecture tour of Penang and Kuala Lumpur, from July 17-19.

He also spoke before a well-attended crowd at the home of PKR de facto leader Anwar Ibrahim in Kuala Lumpur last night.

Tariq also said in Penang on Wednesday that some liberals believed that even when speaking in the English language, one must use the word ‘Allah'. However, this was not the reality.

Muslims believed that diversity of languages was a sign of God's presence.

Not allowing others to use the word ‘Allah' showed "inferiority complex and that we are not confident" about our principles, he added.

Tariq warns against 'playing with Islam and hudud'