Already facing criticism from the industry over its logo, the 55th National Day’s theme song, too, has left many cringing.

For Buddhi Hekayat, who penned the award-winning song Awan Nano , the National Day theme song has the hallmarks of “vulgar propaganda”.

“The words may be polite but it is just that. It does not reflect nationhood and the meaning of independence, but is a song to showcase a ruling government,” he said. 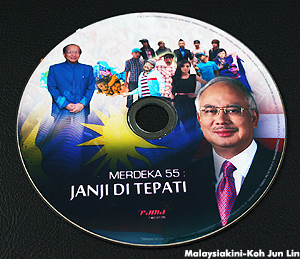 He added that the line “ janji sudah ditepati, kini masa balas budi ” (Promises have been fulfilled, now it’s time to pay return the good deeds), is like “holding a knife to the rakyat’s neck”.

“Many people would say I’m saying this because I’m a PKR member and all that, but truly, I’d say the same if Pakatan Rakyat did this,” said the Parit Sulong PKR division chief, whose real name is Hasmi Hashim.

Malaysiakini received a CD with the song and lyrics during the launch of the National Day theme at Brickfields earlier this month.

The lyrics were written by Information, Communications and Culture Minister Rais Yatim while the melody is by Aye, Jasnie and Arman E six.

Buddhi, who commented without knowing the lyricist’s identity, said that the minister who wrote the song failed to differentiate between the concept of nationhood and government policy.

This, he said, is exemplified by the focus on things like Bantuan Rakyat 1Malaysia and Klinik 1Malaysia.

He added that propaganda songs need not be trite, and can be powerful even in simplicity like the song Anak Kecil Main Api - a song used by National Civics Bureau (BTN).

“It doesn’t come anywhere close to songs like the Indonesian patriotic song Gugur Bunga , which was penned to commemorate independence.

“This theme song is transient, it has no longevity which to me is a real shame,” he said.

Agreeing with him, Bob Lokman, who wrote the lyrics for the hit 80s rock ballad Isabella , said that the National Day theme song “sounded cheap”.

“There is no depth in the words, no poetry nor is there any sense of patriotism. Patriotic songs are supposed to move the people, not teach them how to brown-nose,” said the PAS member.

“The song is telling people they have no choice but to support the ruling government. It is a political campaign and not a National Day song.” 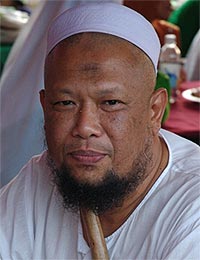 Bob ( right ) added that the melody of the song, too, did little to boost the song and the rap interlude was unsuitable to invoke feelings of nationhood.

“I believe they intended the rap part to keep up with trends, but when Lionel Richie wrote We Are The World , rock was all the rage and he bucked the trend and that song is still sung today,” he said.

When informed that the lyricist is Rais, the duo said that it would have been better to have left the job to a professional lyricist.

“It’s true that everyone has the right to write, but there must be some respect. You don’t see ministers trying to be doctors,” Buddhi said.

Malaysiakini had also approached other professional and prominent lyricists who were not members of any political party on the matter, but they declined to comment.

The National Day theme Janji Ditepati has been under fire by the opposition, as it is also the name of a campaign by the BN which was launched months earlier.

Rais, however, defended the theme by saying: “Malaysia has truly arrived as an achieving nation after 55 years of independence. Why can't we say ‘ Janji Ditepati ’?”

The minister did not respond to the portal’s call, mobile text message and tweet on the lyrics of the song.