iVICTIM While the police and government leaders were touting about the reduction in crime rate and blame the media for creating a perception that crime is rife, several Malaysiakini staff were having first-hand experiences as victims of crime just last month.

One of them was traumatised in a gang robbery, while three others suffered losses after their cars were either stolen or broken into.

Here are their personal accounts:

I was robbed in the wee hours of July 24 near the Sime Darby Medical Centre in Subang Jaya by two men.

It happened at 1.28am as I was walking to a teh tarik stall near the Subang Business Centre in SS15 after visiting a relative at the emergency ward of the medical centre.

I saw two men standing about 60 metres away from me. As I walked past between them, one of them asked for directions to some place.

Then, all of a sudden, he grabbed my shirt collar with both hands. As I struggled, the other guy came towards me with I believed was a steel rod from a car jack.

Speaking in Tamil, they asked me to take off my clothes. I refused, despite them telling me to do so three times.

I was struggling to get out of the assailant's grasp and we were moving in circles, while the other stood by, ready to swing the steel rod at my head. They then demanded my wallet and handphone, which I refused to hand over. The guy holding my collar punched me on the face.

Just then, I spotted a car nearby, with two other men in it looking at us. A four-member gang, I thought, and decided it would make no sense to fight them. I gave in.

They grabbed my handphone and wallet - in which I had just RM30, my bank ATM card, MyKad and a few other personal things - and then dashed into the car which sped off.

I immediately made a police report. The car was a Proton Iswara, greyish or blue in colour and I'm certain about the number plate - BFY 5334.

My advice: Be more alert, especially when it is dark. And be mindful of cars with two or three men roaming around in a particular area. I could have avoided this if I did not assume that the two men who grabbed me were restaurant workers.

My car was stolen from the outdoor car park at Stadium Melawati in Shah Alam between 8.30pm and 10.30pm on July 17 while I was watching an exhibition basketball match there. 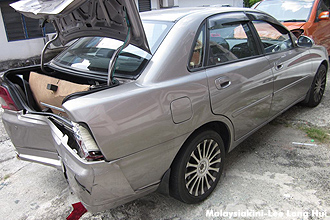 I had parked my second-hand Proton Waja, which I bought for RM20,000 no more than a month ago, at the outdoor car park. The Proton was my first-ever car and I got to love it very much.

As I walked back after the game, I noticed that the car park was very dark due to insufficient street lighting. I found my car missing, and I went straight to the police station to make a report.

Fortunately, 11 days later the police found my car abandoned in a residential area in Petaling Jaya. It was in very bad condition. The boot was severely dented, the left side mirror broken and there were scratches all over the car. 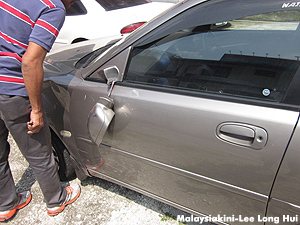 However, the engine was intact and in fine condition. Nothing inside the car was taken and I have just filed the damages claim with my insurance company.

What also disappointed me greatly was that the investigating officer told me "there is no criminal case involved" as I got my car back.

Even if I had got my car back within two weeks, the police officer's attitude annoyed me - and the fact that the culprits are still out there and probably joking about the ‘joy ride' that they had with my car.

My car window was smashed on the night of July 24 as I was having dinner with a colleague at Old Klang Road and I lost my camera and video-shooting equipment costing more than RM10,000.

My colleague and I arrived at the Chinese food outlet around 9.30pm that day, driving there separately in our cars. We parked our cars back to back, beside a bus stop under a street lamp close to the shop. 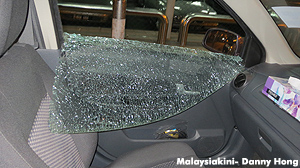 We finished our meal an hour later and upon reaching the parking spot, we saw a few people inspecting my car. One man on a mountain bike told me that the front passenger seat window of the car was smashed.

He then showed me his police identity card, told me to lodge a report and left, saying he would be on the lookout for the thieves.

According to a witness at the bus stop, the theft happened five to 10 minutes before my colleague and I got back to our cars, and that it was done by a gang of four. One of them used his elbow to smash the window.

It was my carelessness for not bringing my equipment along. These were in a bag that I placed under the front passenger seat. The camera and other equipment belonging to Malaysiakini were gone. Besides these, nothing else was stolen.

The road was busy at that time and there were buses stopping frequently to drop and pick up passengers. 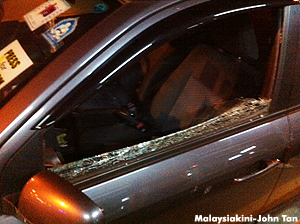 After I made my police report, the officer who recorded my statement told me that even police cars, adorned with the police logo and all, have had their windows smashed and some of their equipment stolen.

He also showed me a device thugs use to detect electronic items kept inside cars. The China-made device is also used by the police as well and it can detect anything with a clock running in it, such as laptop and camera with a time feature, even if the main battery is removed.

The police officer advised me not to keep any electronic item in the car, even in the boot, because the device can easily detect them.

The rear passenger window was smashed on the night of July 5, while parked on Lorong Abdullah in Bangsar Utama, near the Malaysiakini office. However, the window remained intact because of the anti-theft security film on it.

Due to insufficient parking space in the area, many workers park their cars along the quiet road leading to the KTM quarters. There have been numerous car break-ins reported in the area - and it was my turn that night.

Fortunately, the glass window did not break through because of the tinted window security film, and so nothing inside was taken. And yes, luckily I do have windscreen insurance for my car.

Have you too been a recent victim of crime? We would like to hear your story. Please email your personal account to [email protected] .