The sleepy hollow of Raub, Pahang has become the latest hotbed of environmental activism as thousands gathered to oppose the use of cyanide at a nearby gold mine.

Residents of Kampung Baru Bukit Koman, who live adjacent to the gold mine, claim that the use of cyanide had badly affected their health but the government and the mining company - Raub Australia Gold Mining Sdn Bhd - has disputed this. 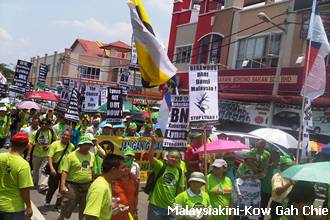 Led by the ad hoc Ban Cyanide Committee, the residents have been opposing the company since 2007, even before the company began operations, through the courts and appeals to the federal government, to no avail.

With every avenue exhausted, Raub activists are determined to stage a major protest today and the authorities have allowed them to use the Raub sports complex field, better known locally as Padang Milo.

The police have barred the group from holding any processions and have requested Raub Australia Gold Mining to have a representative present at the protest to receive a protest note.

Incidentally, there are a large number of people at the nearby Dataran Raub, managed by the Raub district council, which was the venue originally requested for by organisers. 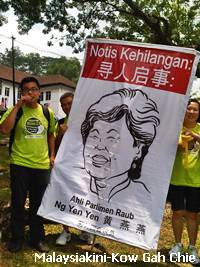 1.40pm - Pahang PKR and Kuantan-based activists who are campaigning against the Lynas rare-earth refinery were seen disembarking from 11 buses.

They were armed with their usual array of banners denouncing Lynas.

Pahang PKR committee member Lee Chean Chung said the banner was made on behalf of the people of Raub who have not seen much of their MP.

1.45pm - Although protesters are mostly in a jovial mood, there are certain groups that are not too happy with the rally.

"Oppose Himpunan Hijau Raub. Do not trouble the people of Raub trying to rest for the weekend," wrote one banner purportedly placed by Persatuan Pemuda Pemudi Raub Bandar.

1.48pm - The crowd has grown to about 3,000 people and they are being entertained by activist Hishammuddin Rais, who is the emcee for the event. He leads the crowd in a rendition of Suara Rakyat under the scorching heat.

Many opposition leaders are seen amongst the crowd, including Kuantan MP Fuziah Salleh and Bakri MP Er Teck Hwa.

Like the Janji Demokrasi rally on Aug 30, many protesters came armed with trumpets and are blaring their way into the field.

2.11pm - The event is now officially under way after a prayer recital and the singing of Negaraku. They field is approximately 40 percent full.

2.16pm - The emcee has urged participants to sit down as chairperson of the organising committee Wong Kin Hoong addresses the crowd.

Family members of the late Teoh Beng Hock are also spotted among the crowd. 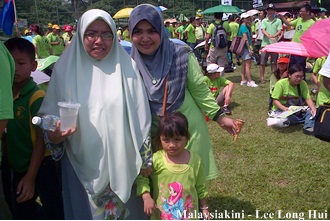 In his opening address, organising committee head Wong Kin Hoong urged Malaysians to use the ballot box to choose a government that will safeguard he environment.

He lambasted Prime Minister Najib Abdul Razak for ignoring the plight of Bukit Koman villagers, which made his 1Malaysia slogan ring hollow.

“Is that any wrong of our demand (for green policies)? We don't think so. It is the corrupted and incompetent government politicies that are wrong,” he said.

2.30pm - The next speaker is a representative from another environmental group Pengerang Prihatin, which is formed to protest against the Petronas Refinery and Petrochemical Integrated Development (Rapid) project.

The movement's vice-president Sim Seng San said his group is organising a similar rally in Pengerang, Johor on Sept 30 to raise public awareness on the dangers of the RM60 billion project.

3.20pm - Several people who claim that they are suffering ailments as a result of exposure to fumes from the gold mine took the stage to tell their story.

A 62-year-old woman Chin Thian Hee, who held a large bag which she said contained her medication, broke down on stage and urged the public to help stop mining operations.

"It has been two years of suffering," she said.

Another resident, Woon Soon Fatt, said he had spent RM10,000 on medical expenses and doctors' fees for his family of six who suffered skin problems.

3.30pm - The field is now rather thinned out because many people are finding shade as the weather is extremely hot, but a festive atmosphere remains. "Pahang has become a dump site. We have radioactive waste in Gebeng, toxic waste in Raub, and now even Tasik Chini is threatened."

3.55pm - Rally organisers urge protesters to now march to the gold mine in Bukit Koman since Raub Australia Gold Mining Sdn Bhd failed to send any representatives to receive their protest note.

Previously, the police had announced that the company would send a representative to the rally to receive the note.

The representative was supposed to have arrived at 3.30pm. 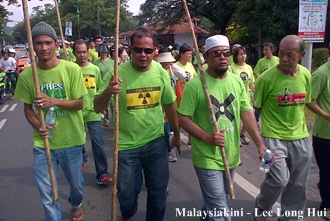 4.05pm - Now that many of the protesters have come out from the shade to join the march, it appears that there are about 10,000 people joining the march.

Raub district police chief Wan Mohd Samsudin Wan Osman tried in vain to stop the crowd from marching but the massive crowd just slipped past him and his men.

Wan Mohd Samsudin told reporters later that the company's representative was on the way. 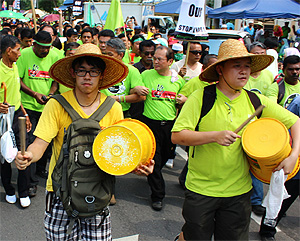 Asked about the organiser's claim that the representative was supposed to arrive at 3.30pm, Wan Mohd Samsudin said: "Maybe there was some miscommunication".

4.10pm - Despite the fact that the march is not part of the agreement with the police, the men in blue are nevertheless escorting the crowd. Also lending a hand at crowd control are PAS' unit amal members.

Traffic police are also seen stopping vehicles to allow the march to proceed.

The gold mine is about 1km away from Raub sports complex where the rally took place.

4.20pm - The police managed to intercept the crowd before they managed to reach the gold mine with representatives from the company in tow. 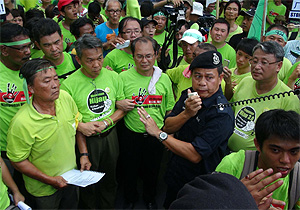 Raub district police chief Wan Mohd Samsudin Wan Osman explained that the police wanted to fulfil its end of the agreement with the protest organisers in facilitating the handover of its protest note to the company representative.

He denied claims that the company refused to accept the note, but instead explained that their representatives were late.

The crowd was very visibly very emotional during the process and continously chanted "Ban cyanide". 4.33pm - Organisers says that the rally is now officially over and wants everyone to disperse peacefully.

However, they did express their disappointment over the company's decision to send two junior staff to receive the protest note.

Thus, they handed over one copy of the document to Raub district police chief Wan Mohd Samsudin Wan Osman, urging him to make sure that it arrives at the desk of the company president.

He said there were no untoward incidents reported during the rally and a meeting would be held with rally organisers to review the day's events.

Asked if the organisers will be investigated for breaching their earlier agreements not to march, he said: "I will consider it".

He revealed that he had deployed 300 police personnel, mainly to direct traffic.

"Did you see any uniformed police officers on the field? No?

"That's because we were more focused on traffic since the rally is allowed by law," he said. 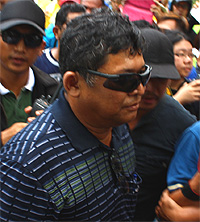 5.15pm - At a separate press conference, rally organisers said they felt cheated by the gold mining company which had reneged on an earlier promise to send a high-ranking officer to receive the document.

They claim that the two so-called representatives ( see photo left ) were a security officer and a designer.

5.30pm - This concludes our LIVE report from Raub, Pahang.