The PKR entourage to Johor today led by its de facto leader Anwar Ibrahim faced another round of attacks at Skudai this evening which could have caused an accident for the party's campaign bus.

PKR secretary-general Saifuddin Nasution told Malaysiakini during the 800-table PKR dinner at Skudai that the attack happened just before the entourage reached the dinner venue, which is a carpark beside Sutera Mall.

“On our way over here, we heard a loud bang when we were passing under a pedestrian bridge.

“We discovered that a stone was thrown onto one of the cars in our entourage. 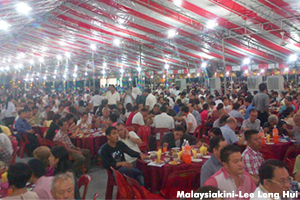 “Then we found nails on the road. So we stopped at the roadside while our security personnel cleared the road before we could continue our journey,” he said.

PKR vice-president and Kuantan MP Fuziah Salleh, during her speech delivered at the dinner, claimed that they saw a car in the front of the entourage had lost control and spun around to the opposite direction.

“We found out the road was full of nails. The perpetrators wanted our bus to meet with an accident!

“Alhamdulillah, we managed to overcome all these challenges,” she told the multiracial audience of some 6,000.

The car, which managed to make to the dinner destination, was dented and scratched on the bonnet.

Met by Malaysiakini later, Fuziah said the incident happened about 1km away from the dinner venue on a dark road, but she did not know the name of the road.

The car of PKR organising secretary Radin Shamsulkamar was punctured due to the nails.

“Only one tyre was punctured. So we replaced it with a spare tyre and continued the tour.”

According to Saifuddin, before reaching the dinner venue, the entourage including Anwar went to Kampung Skudai Kanan to send their condolences to the family of a party headquarters staff member whose mother had just passed away.

When they were about to leave the house of the staff member's aunt, Saifuddin said some 15 people who claimed to be Umno members in that neighbourhood approached them and wanted the PKR entourage to leave the area because they were not welcomed.

“There was a commotion between them and our security personnel. We had to rush Anwar into a car and send him back to the bus,” he elaborated. 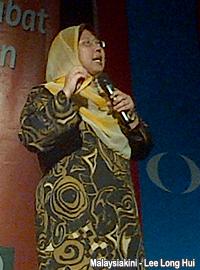 Fuziah ( left ) claimed an Umno Wanita member went into hysterics, screaming and shouting at them.

“Maybe it was because we parked our bus in front of the Umno office there as it couldn’t enter the village,” she said.

According to Radin, policemen came during the commotion but instead of dispersing the Umno members, they asked for the MyKad of the staff member’s family.

“They asked for his MyKad, his wife's MyKad, and his uncle’s and aunt’s MyKad.

“The police bowed to the pressure of the locals and went to the house of somebody who had just lost his mother and harassed them,” said an angry Radin.

Saifuddin said the attacks on the PKR entourage earlier today while they were praying at the Tangkak mosque and later when paying condolences to the family of a party staff member, were uncalled for. 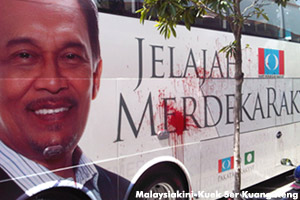 “This really upset me, the way they conduct themselves. This is not Malay culture, what more to say this is Islamic teaching... It shows their immaturity,” he said.

Saifuddin then trained his guns on Home Minister Hishammuddin Hussein, who earlier today said there was no need for the government to guarantee the safety of the PKR entourage in Johor.

“Probably they were encouraged after reading the home minister’s statement.”

Fuziah said Hishammuddin’s statement was taken as a green light for the perpetrators.

She said the police had sent personnel to escort them in Muar and Batu Pahat but left them after they entered the Ayer Hitam highway toll plaza heading to Skudai.

However, nobody was hurt in both incidents.

Anwar and the PKR leaders were on a one-day tour to Johor in a symbolic double-decker campaign bus, meeting supporters and people in Tangkak, Muar, Batu Pahat and Skudai.

PKR's double-decker campaign bus was splashed with red paint again, for the third time, while Anwar was on his tour to Johor this afternoon.

According to Johor PKR chief Chua Jui Meng, the vehicle  was attacked outside a mosque in Tangkak, Johor.

Subscribe Today
Read more from this author :
Kuek Ser Kuang Keng
Read more like this :
#pkr
Most Read
Most Commented
Most Recent