Protesters are now gathering in fishing village of Pengerang in Johor for the 'Himpunan Hijau Lestari Pengerang' (Pengerang Sustainable Green Rally) against a nearby oil refinery project.

Local residents, led by the ad-hoc Pengerang NGOs Coalition, had complained that they were not consulted and they feared that the massive project would adversely impact the environment, their health and their livelihood.

The RM60 billion Petronas Refinery and Petrochemical Integrated Development (Rapid) project would eventually occupy 9,000 hectares of land, affecting at least 15 villages in the area at the southern tip of Johor.

However, local MP Azalina Othman had denied that consultations were not held.

The protest today, scheduled to kick off at 10am, is partly aimed to refute claims that the majority of locals are in favour of the project.

They would first gather at two designated locations about one kilometre away from the venue, before marching to Dataran Sungai Rengit in Pengerang.

Both the protest's campaign material and a stainless steel sculpture at the square feature depictions of lobsters, in honour of Pengerang's most famous produce.

In addition to the ‘Angry Lobster', a dugong has been added as a mascot after the carcass of one was washed ashore late last month. 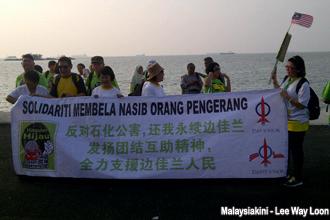 7.40am: The sun is out in Pengerang, and in the town area near the rally point, Dataran Pengerang, many people are spotted donning the trademark Himpunan Hijau green shirts.

A group of PAS unit amal (security unit) members is walking along the beach towards the town.

It's reported that there are roadblocks set up along the highways leading to Pengerang. The main road in front of Dataran has been sealed off by police. A few FRU (riot police) trucks are seen moving through the area. 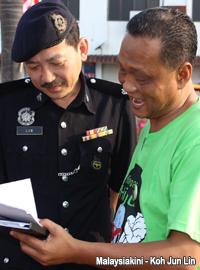 7.50am: More than 120 people led by Kuala Lumpur Selangor Chinese Assembly Hall CEO Tang Ah Chai arrive in three buses and they are joined by another bus from Bukit Koman Ban Cyanide Committee.

Bukit Koman Ban Cyanide Committee chairperson Wong Kim Hoong told Malaysiakini that another bus from Raub has been stopped from using the highway by Transport Department officials during its six-hour journey from Pahang.

"This forced them to use the old route to Pengerang," said Wong.

According to Johor Dapsy chief Tan Hong Pin, the Ulu Tiram toll plaza at Desaru Highway has been blocked by the police.

8am: Protesters, perhaps in their hundreds, are still having breakfast in eateries throughout the small town surrounding Dataran Sungai Rengit. 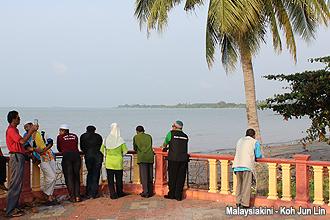 About 30 are seen are in the immediate vicinity of the square patronising stalls selling protest paraphernalia, posing for portraits or simply enjoy the salty ocean breeze.

Meanwhile, police appeared to have assembled for a briefing at the local police station, about 100 metres from the venue.

8.45am: The crowd around Dataran Sungai Rengit has now swelled to about 300, most of them seeking shelter under the trees or at shoplots from the hot sun and cloudless skies.

9.05am: Organisers ask those under 15 years old to leave the protest venue before the rally starts at 10am, in accordance to the Peaceful Assembly Act 2012.

The announcement, which is made through the public address system, also asks those wearing masks to remove them. 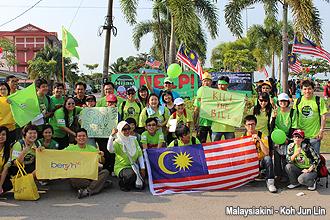 Armed with banners denouncing the oil refinery project, many are busy taking photos.

A group of them from Pagoh shouts "Down with Muhyiddin” in Chinese, referring to Deputy Prime Minister Muhyiddin Yassin, who is also the MP for Pagoh.

Another group from Segamat chants: "We are with you, Pengerang”.

9.55am: About 1,500-strong crowd begins marching from Bao An Temple to the rally venue, about 1km away.

Many of them are opposition supporters from all over the country. About 40 PAS unit amal members are helping to direct traffic and provide security. 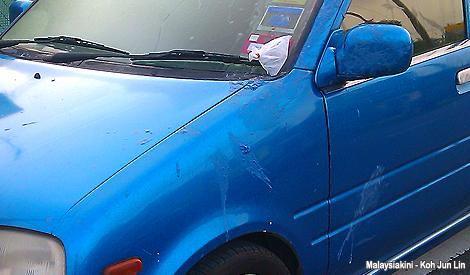 10am: The Himpunan Hijau Lestari Pengerang kicks off with a prayer in Dataran Sg Rengit despite that those marching from Bao An Temple have yet to arrive.

Meanwhile, Malaysiakini citizen journalist Azizan Yunos claims that his car, a blue Perodua Kancil, was splashed with acid this morning.

He was in Pengerang since 3pm yesterday with several others to do a video on Lim Hwee Seng, a former teacher in Pengerang who is revisiting the area.

The car Lim used was park in front of Azizan's car at the time and was not spared in the attack.

The incident occurred at 5.15am today in Teluk Ramunia where the group was staying, about five minutes' drive away from the protest venue.

10.15am: Representatives from various NGOs are invited to take the stage briefly, one after another, while photographers on the ground complained of the lack of time to take their photos. 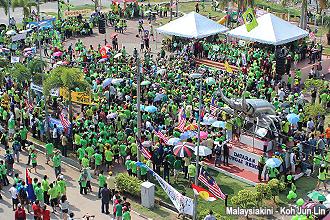 10.20am: With the arrival of the marchers, the number of protesters has been boosted to about 3,000.

After ending his speech with chants of "Defend cultural heritage" in both Bahasa Malaysia and Chinese, an empty chair reserved for local MP Azalina Othman was moved aside to make room for more arriving VIPs.

"We are here because we love Malaysia, we don't want our lands become the rubbish bins of Australia and Taiwan.

"Instead, we will throw them to rubbish bin of history if they gadai (pawn away) our rights and lands," he says.

10.45am: Holding several pages of documents, Anak chairperson Mazlan Aliman ( below ) lists out the purported reasons why Pengerang has been chosen for the Rapid project, each one triggering a round of boos from the crowd. 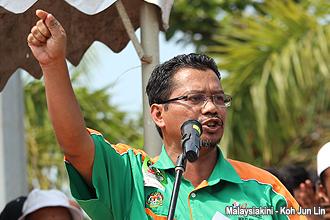 Among them include Azalina supposedly informing Prime Minister Najib Abdul Razak that there would be no opposition to the project, and that the Johor government had been offered a 10 percent stake in the project as an "inducement" to facilitate the land acquisitions.

10.50am: Himpunan Hijau Bukit Koman chairperson Wong Kim Hoong takes to the stage and blames the premier for failing to fulfill his promises and slogans.

"Our PM said 1Msia and people first, but this slogan has humiliated all of us as we cannot live happily and peacefully.

"For the sake of a small group of people, the government has pawned the lives of the rest.

"We have to stand together and use our votes to reject all these hazardous projects come the next general elections."

11.10am: Himpunan Hijau Kuantan committee member Clement Gan urges for sustainable development, saying that neighbouring countries should be concerned about the environmental damage here, as it may affect them.

It's now the turn for politicians to give their speeches. DAP state chief Dr Boo Cheng Hau urges the people to "green" the whole of Johor and Malaysia in order to save the nation and its land.

"This is for our children in the coming generations," says the Sekudai state assemblyman.

11.20am: PAS Johor commissioner Mahfodz Mohamed also sticks to the theme of sustainable development, saying the party opposes development that only benefits cronies.

"If we defeat BN, God willing, we shall defend the rights of the people of Pengerang," he says. 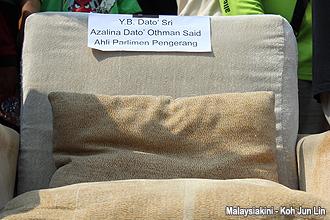 Johor PKR chief Chua Jui Meng hits out at Pengerang MP Azalina Othman for failing to take care of the people here. "Where is Azalina? Is she staying in the hotel now?"

He says when Pakatan takes over, it will stop all hazardous projects and safeguard the lives of the people.

Solidariti Hijau chairperson Khairuddin Abdul Rahim says his side has mobilised about 100 people to attend the rally today.

He says this shows the solidarity of the Johor people against environmental hazardous projects.

"Let's together help the Pengerang community and return the green environment to the people," he says.

11.25am: Chua, claiming to represent his party's de facto leader Anwar Ibrahim, also promises that the Rapid project would be scraped if Pakatan takes over the federal government. 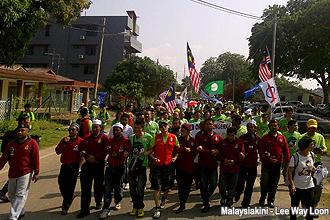 "We (PKR) already represent the people here. Our lawyers have already petitioned against the project in the courts," he adds.

11.30am PAS veep Salahuddin Ayub says next week, Parliament will debate the budget. "We from PAS, PKR and DAP will make your struggles the topic of our speech.

"This is because your MP is not fighting for you. She has challenged us to a debate, yet she is not present today."

11.35am - Himpunan Hijau chairperson Wong Tuck says although the fight against the government had been hard, it must go on.

"The government has given up on us, we (the people) must give up on them," he said to loud cheers.

She thanks all the protesters from all over the country for turning out in support of the Pengerang community.

However she declares the struggle is not over yet and and they will continue to fight for the people. 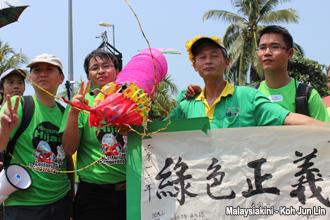 "We can only save our country by our votes," she says, adding that the coalition will submit a memorandum to Johor Mentri Besar office on 8 October.

She was also disappointed with Azalina's absence today though the organiser had invited her to come.

"I went to Parliament on the budget day and invited her to attend the rally, but where is she?"

11.45am - Emcee Hishamuddin Rais leads protesters in singing 'Suara Rakyat' and to recite the Earth Charter, the latter of which is printed on the back of the protesters' green T-shirts as well as in chants the slogan, "stop rapid".

He then announces that the rally has ended, and urged protesters to pick up the garbage as they leave.