Investigation papers submitted to the attorney-general by the Malaysian Anti-Corruption Commission (MACC) show that RM40 million a Sabah businessman was caught with in trying to smuggle into Malaysia from Hong Kong were political contributions to the state Umno and not for Chief Minister Musa Aman. 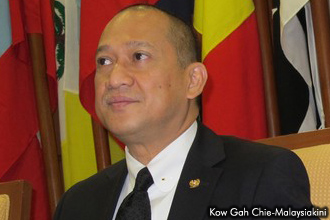 “The funds were contributions to the Sabah Umno liaison body and not for the personal use of the chief minister,” Minister in The Prime Minister's Department Mohd Nazri Abdul Aziz (right) states in a parliamentary written reply to Batu MP Chua Tian Chang, who is better known as Tian Chua.

In the same reply, Nazri also said that the MACC has concluded that "no element of corruption was proven" in the case.

On Aug 14, 2008, the businessman, who has been identified as Michael Chia, was caught red-handed at the Hong Kong International Airport with Singapore currency worth the RM40 million in his luggage before be could board a flight to Kuala Lumpur.

Chia was charged with money laundering and trafficking by the Hong Kong Independent Commission Against Corruption (ICAC). 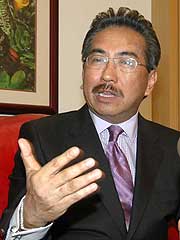 ICAC investigations also reportedly found that the money was earmarked for Musa and were part of more funds being deposited into a Swiss bank account containing US$30 million allegedly being held in trust for the Sabah chief minister by a lawyer.

Whistleblower website Sarawak Report has linked the monies to timber kickbacks which it said were bound for Musa's pockets for approving timber licences.

Musa has denied all the allegations.

Nazri's reply also states that the Hong Kong ICAC took no further action in the case after the MACC finding, while the request for cooperation in a criminal matter lodged over the Swiss bank account has been withdrawn for the same reason.

Speaking at a press conference in the Parliament lobby today, Tian Chua questioned the MACC finding that no graft was involved.

"Even if the money was not for Musa but for Sabah Umno, MACC still hasn't explained why no graft is involved. What is the money for and why is a businessman giving to money to Sabah Umno?"

Tian Chua ( left ) also claimed that the ICAC could not take further action because the attorney-general and MACC were dragging their feet in providing the assistance requested by the Hong Kong anti-graft body.

The request for cooperation on the matter of the Swiss bank accounts, he added, was still outstanding.

Nazri's reply appears different from the MACC statement that was issued to the press just last week. 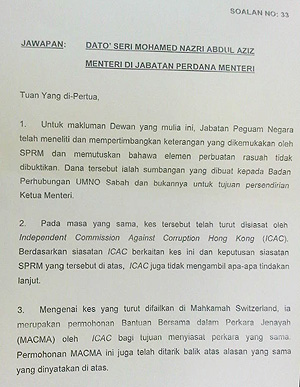 In the statement, MACC said its investigations were concluded but that its operations evaluation panel had instructed that further evidence be collected against Sabah Chief Minister Musa Aman before the matter could proceed to prosecution.

According to MACC deputy chief commissioner (operations) Mohd Shukri Abdull, the matter was presented to the panel at its last sitting in May.

“The investigation against Musa is on corruption (not abuse of power) and we have completed the investigation, but the panel has instructed us to get more evidence,” Mohd Shukri had said.

Pakatan: Say no to US gunboat diplomacy