Organisers of the People's Uprising Rally are calling on participants to join seven processions towards Stadium Merdeka before the Saturday rally officially gets underway.

According to the latest instructions by rally organisers, the seven rally points for the procession and the respective leaders of the processions are as follows:

According to political activist Hishamuddin Rais, who is on the organising committee, the announcement of designated procession leaders was requested by the police.

He told Malaysiakini that the organisers will also be heeding a police request not to march from Dataran Merdeka. 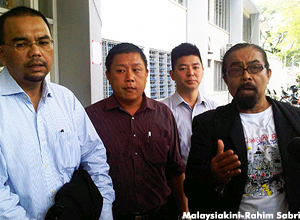 Hishamuddin ( far right ) also announced that organisers strongly discourage the use of private vehicles by rally participants and urged them to use public transport to reach the rally points.

He said those setting up stalls to cater for the participants are only allowed to operate at the Maharajalela monorail station, the vicinity of the Kuala Lumpur and Selangor Chinese Assembly Hall and the Hang Tuah LRT station.

Once the stadium reaches saturation point, late-comers are required to sit outside the stadium.

He also urged all participants to behave appropriately during the rally.

"This is a peaceful assembly. Please avoid all forms of provocation. Don't create chaos," he said.