If Prime Minister Najib Razak had heard the crowd at the back on the field, he would have been rather disappointed.

In the midst of his speech at the Penang state BN Chinese New Year (CNY) open house held at the Han Chiang College field today, he said he did not want the day to be serious as everyone was expecting a great show by top Korean pop star Psy.

"Are you ready for Psy?" Najib asked about four times and the crowd responded loudly "Yes!".

He then asked "Are you ready for BN?" but the crowd at the back shouted "No" and laughed. 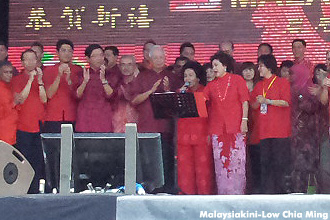 They also laughed when Najib mispronounced Han Chiang as "Han Niang", when he announced that the college will be upgraded to University College status.

She was accompanied by several BN leaders including Tourism Minister Ng Yen Yen.

Before his speech, Najib's son 'Jiping' gave a speech in Mandarin.

Najib, who took over from him, started his speech with "Lu ho bo? Lu bo ho?" (Hokkien for "are you okay?"). 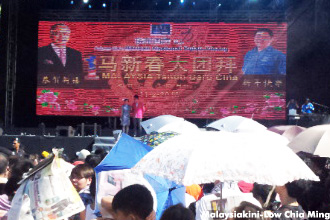 He yelled 1Malaysia and asked the crowd to clap for former premier Abdullah Ahmad Badawi who was present.

He said he felt fortunate and happy that he managed to do what he never did before - to celebrate CNY with Penangites.

"Thank you for giving me and my wife and family a rapturious and warm welcome to Penang.

"I want you to feel we are here for you, to make Penang the Pearl of the Orient and give the best for Penang in the future.

"This is a government that cares for all Malaysians, fair and all inclusive and has real plans for the future," he emphasised. 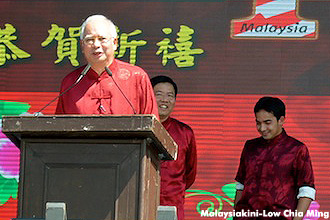 Najib said in the last four years, Malaysia had seen real change and progress and asked Penangites to give BN a chance to make the country better and truly developed by 2020.

"We want to listen to people and by coming here, I am listening to people. You want more affordable housing, I commit myself and BN to provide Penang with 20,000 affordable homes in next five years," he added.

He asked people to rely on this government, shouting " janji di tepati and insya Allah , we will deliver".

Thousands come for Psy, not so much for PM