COMMENT 'The Sulu Sultanate invasion of Lahad Datu.' This is the term I consider most appropriate to define the standoff between some 100 heavily armed intruders from the now defunct Sultanate of Sulu and the Malaysian security forces in Kampung Tanduo in Lahad Datu.

The intruders have made clear that they are there to stay for as long as necessary and more of their kind will be joining them to claim a piece of Sabah that they perceive to belong to their ancestors. 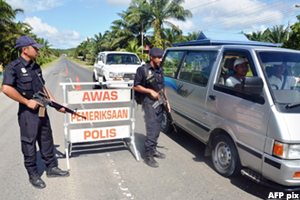 They have also made it clear they are not going to budge, even when threatened with deportation.

If the first batch of 100 or more can infiltrate into our territories without being detected by our security forces, then their back-up forces can row their boats across easily, without any resistance as well.

There was, without any doubt, a security lapse in Sabah waters.

There wouldn't have been an intrusion of such magnitude otherwise.

If we are expecting the Philippines Armed Forces to assist us in preventing them from coming here, we might as well forget it. 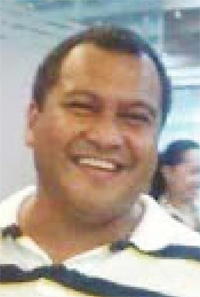 If we played them out at the last minute in handing over Manuel Amalilio ( left ), the most wanted conman who has allegedly cheated some 15,000 Filipinos of almost RM1 billion, then we cannot expect sincere cooperation from them.

While it is not wrong for some BN MPs to question Senator Nick Xenophon's role in visiting Malaysia, it is also not wrong for Malaysians to demand that both the defence minister and the home affairs minister explain the security lapse in Sabah waters that resulted in the Kampung Tandou standoff.

We have lost Pulau Batu Putih (Pedra Branca) to Singapore due to the carelessness and lapse of alertness by some civil servants.

We cannot afford to lose any more of our lands, surrender our sovereignty to criminals or show our weaknesses.

Not so different from Sauk incident

There's not much difference between the standoff in Kampung Tandou, Lahad Datu, and the one that took place in Bukit Jenalik, Sauk, Perak, in July 2000.

The only difference is in the numbers. There were less than 30 in the Sauk incident while there are now at least 100 in Kampung Tandou and more are expected to join them.

If the Sauk case was classified as "waging or attempting to wage war against the Yang di-Pertuan Agong, a Ruler or Yang Dipertua Negeri" , which is an offence against the state, then the citizens can demand the same law be applied to the Sulu invaders.

If our own citizens involved in the Sauk incident can be forcibly disarmed and even killed by the security forces and later charged in the court of law and a few eventually hanged, then the rakyat has the right to voice their outrage should the prime minister, who was the defence minister during the Sauk incident, treat the Sulu invaders with kid gloves. 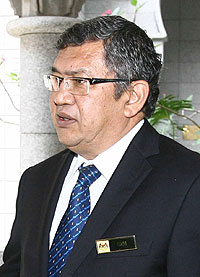 Attorney-General Abdul Gani Patail, who hails from Lahad Datu, Sabah, and who had about two weeks ago promised to take action on the illegal immigrants in Sabah since that is his state, would be failing in his duty should he not advise the Yang di-Pertuan Agong and the prime minister that there are provisions in the Penal Code to deal with those armed criminals from Sulu holed up in Kampung Tandou.

After all Gani, as one of the lead prosecutors in the Sauk incident, will surely remember the ingredients needed to prove this case.

However, should there be any intention or attempt to exploit and use the Lahad Datu incident to spin Najib's profile politically before the impending general election, then they are bound to fail miserably.

Should the actions taken against those armed intruders in Kampung Tanduo be less severe than those imposed against our own citizens in the Sauk incident, then the actions shall be deemed to be a disgraceful, treacherous and cowardly act by the prime minister.

My army will stay put in Sabah, insists Sulu sultan