FILM REVIEW Despite the cabinet deciding against airing the controversial Tanda Putera film until after the next general election, the leader of the same cabinet, Najib Abdul Razak, appears keen on showing it to selected segments of the Malaysian populace. 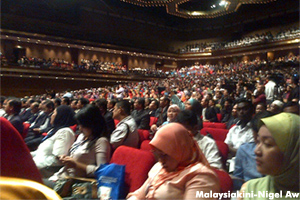 The reason is likely that the film is a double-edged sword, serving as an effective propaganda tool for one community - but which may well offend the other communities.

While both the Malays and Chinese are depicted in the film as turning on each other during the May 13 riots, the Chinese were often characterised as the aggressors.

The film opens with a group of Chinese, who appear to be Communist sympathisers, attacking a party worker, abd calling for the 1969 general election to be boycotted.

The victim was later revealed to be an Umno member, for news flash with the headline: ‘Umno party worker killed’ is shown. 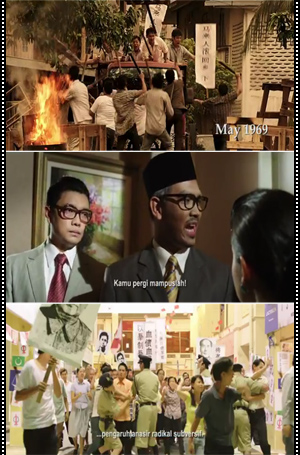 A voice then narrates that victory marchers had chanted “ Melayu balik kampung ” (Malays should go back to their villages), hurting the feelings of Malays and thus triggering the May 13 race riots.

The build-up to the tension in the film shows a group of Chinese youths vandalising campaign materials.

They are later, when fleeing, shot by the police,  causing anger among the Chinese community.

Later, an angry crowd of Chinese protesters assembles and their leader tells the crowd not to give reasons for the police to arrest them, for they could take “revenge” during the general election six days later.

After the general election, several scenes are shown, presumably of opposition supporters of Chinese descent, laying claim to to Selangor after the incumbent Alliance (present day BN) failed to obtain a majority to form the state government.

A scene showing a group of Chinese on a lorry entering a Malay kampung, declaring that the area now belonged to them, raises tension and the police step in to prevent a clash.

Another scene shows a group of Chinese youth urinating on a flag pole bearing the Selangor flag, outside the residence of the then state menteri besar Harun Idris.

The group declares that Kuala Lumpur - then still a part of Selangor - belonged to them and the menteri besar should get out.

At another protest, the crowd chants slogans in Chinese. A Malay police officer there shifts uncomfortably when he is told that they were chanting “Malays go die”.

In yet another scene in Setapak, a group of Chinese refuse to allow two Malay youths on a motorcycle to pass through, claiming that the area now belonged to them. The pair were beaten up when they insisted on passing through, until the police intervened.

The duo, beaten bloody, subsequently made it to Kampung Baru where a rally led by then-menteri besar Harun of Umno was going on.

Enraged by this, the Malay crowd took it out on a passing vehicle whose driver was Chinese and he was killed. Later, a similar Chinese crowd also went about hunting for Malays.

In another scene at a cinema, the screen suddenly blacks out, replaced with Mandarin words asking the Chinese to leave the venue, which they do.

A man then shouts out, in Malay, why there were Chinese words on the screen and demands the movie be put back on. Then, suddenly, the remaining audience in the cinema is massacred.

Throughout the build-up of tensions and race riots, there is a mysterious Chinese man who observes the happenings. He is later revealed to be a communist leader - indicating that the communists may have had a hand in orchestrating the mayhem.

This angle in Tanda Putera could likely have been derived from former prime minister Tunku Abdul Rahman’s book, titled May 13: Before and After, which was published in the same year of the riots and in which he blamed the communists.

However, the film also seeks to portray the Umno leaders then as having taken every precaution to prevent the racial riots.

Prior to the Umno rally going awry, Harun is shown reiterating that the rally should be peaceful and urges participants to put away their weapons.

Even when the participants went out of control after witnessing the two bloodied youths, Harun repeatedly shouts for them to stop, until he suffers chest pains.

The scene appears to counter the version of the May 13 riots by author Kua Kia Soong in his book entitled May 13: Declassified Documents on the Malaysian Riots of 1969 .

Kua’s book had blamed, among others, Harun for orchestrating the riots in a bid to oust the then prime minister Tunku Abdul Rahman.

The book, which was based on British declassified documents detailing observations by foreign diplomats and correspondents using dispatches in the country, also appeared to receive another rebuttal as the film portrayed these sources negatively.

In one scene, a group of foreign correspondents is shown arguing with an official as they aere not allowed out due to a curfew, and subsequently they say they will write with their “imagination” since their movements are restricted.

The National Operations Council chairperson then, and subsequent second prime minister Abdul Razak Hussein, also raps a foreign diplomat for disputing the casualty figure in the riots, demanding the source of information, to which the diplomat is unable to answer.

The portrayal will a good reminder to audiences of the May 13 racial riots - the version as told, and in which the fear spectre is often raised by the establishment.

The film also focuses on a group of class of students of various races and their lecturer, who are threatened by Malay and Chinese mobs.

Despite their efforts to help one another regardless of race, they eventually drifted apart due to racial fears. But they later make up, as the country pulls away from this dark history under Abdul Razak’s premiership.

These scenes make up about an hour of the film and in the second hour, the attention shifts to Razak and his deputy, Dr Ismail Abdul Rahman.

Though Tanda Putera also touches on the struggle against the communist threat, the New Economic Policy as well as BN’s 1974 general election victory, they come in flashes as the attention is on the two leaders.

Razak and Ismail are gravely ill, but they conceal their illnesses from their families and struggle to perform their duties in the short lives they had. 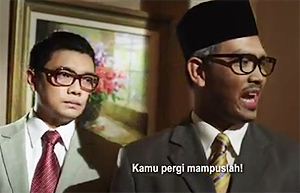 It also tells of their close friendship, and in one instance, Ismail asks Razak to take his personal doctor along for the 1973 Commonwealth Heads of Government Meeting in Canada, after learning of the Razak’s illness.

Ismail died of a heart attack when Razak was in Canada. Razak later insisted that Ismail be buried in the Heroes’ Mausoleum.

The pace of the second part of the film is significantly slower than the first, but was emotionally manipulative.

It portrays Razak's slow and painful death and his family’s struggle to cope with the predicament.

As his condition deteriorated, one of his sons, Johari, spent most of the time by his deathbed but there are mentions of one “Jib” over the telephone, presumably present-day Prime Minister Najib.

After Razak’s death, there are several flashes of Razak interacting with common folk and how he had touched their lives.

One example is when he visits a run-down school and meets a teacher wearing a torn tie.

Razak immediately instructs that the facilities be upgraded, the children be provided with necessities and even gets the teacher a new tie.

The film’s portryal of Razak is simplistic, with the bulk of it dedicated to idolising the former premier who oversaw several landmark policies of the BN, such as the New Economic Policy, Malay as the national language and Felda schemes.

No doubt large parts of the film are indeed based on research material, but they aere religiously derived from the official versions.

Watching Tanda Putera may well be akin to flipping through a secondary school textbook, one-sided and shallow in its presentation, lacking in depth and hardly thought-provoking.

The scenes in the film will resonate well with BN’s age-old messages, but airing it to the general populace now will likely solicit controversy and debate, which may prove risky so near to a general election.

'CARRIE RINA' is a pseudonym. The writer is a film enthusiast who had the opportunity to watch the film at one of its previews held for different groups over the past months.