A former ISA detainee has claimed she and her group had helped process "thousands of identity cards" for Sabah illegal immigrants in the early 1990s to help topple the PBS state government. 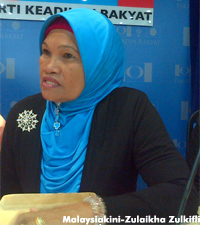 Sixty-three-year-old Siti Aminah Mahmud ( right ) was detained under ISA in 1995 for two years for her alleged involvement in the IC project.

Speaking at a press conference in Petaling Jaya today, she described how she had been tasked with collecting information for the illegal immigrants' IC application and handing the issued ICs to village chiefs throughout Sabah, to be issued to foreigners who were mostly Indonesians and Filipinos.

Siti Aminah said she had been instructed to facilitate the issuance of ICs for the foreigners as part of a plan to help Umno take over Sabah.

“It was in the early 1990s, I was told to help Umno to contest in Sabah and defeat PBS by conducting Project IC in Sabah.

“There were five tasks for me - helping to campaign, increasing Malay voters, locating villagers in rural areas especially those who have no IC at the border of Sabah-Indonesia, and ensuring the victory of Umno in toppling PBS,” she said at the press conference, where PKR Wanita chief Zuraida Kamaruddin was also present.

Originally from Sabah and residing in Skudai, Johor, Siti Aminah was a member of Johor Baru Umno then and was asked by her cousin, who was also an Umno member, to help the party in Sabah.

She was continuously involved in the covert operation from 1990 to 1994, before she was detained under the ISA in 1995 over the operation. 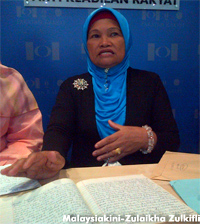 “I knew about it because Datu Mustapha told us not to be afraid about getting arrested. He said this is Mahathir’s and Megat Junid’s project, and he said if he helps Umno to win, he would be appointed as state governor.

“He said so during a mass briefing at the Umno office in Sembulan, Kota Kinabalu in the early 1990s,” she claimed.

'Documents prepared within a month'

Elaborating on the operation, Siti Aminah said the related documents were prepared within a month after the forms were processed.

“We gave out the forms and later handed them over over to the National Registration Department (NRD) and the Umno office in Sembulan. After that, we just distributed the completed ICs to village chiefs.

“I don’t know (the village chiefs). We went in a group of five. One recorded (the details), one collected fingerprints, and I sometimes arranged forms. I went to Sabah twice a week. 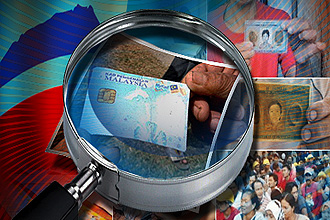 “We found a village, we gathered several people without ICs. The motive was indeed (to give them ICs),” she explained.

Among others, the IC were given to a group of Indonesians in a Felda area in Sandakan, she claimed.

“After collecting the forms, we handed them over to the NRD and the Umno office. Not some but in bags. The process to get ICs would be completed in a month or slightly more than that.

“After we submitted the forms, the process took a month and the ICs will be completed and distributed back to the villages.”

Siti Aminah claimed that those ICs can be identified by the special code printed on the back of the ICs.

"The Project IC code is 04 and 05. It is on the back of the ICs. Only NRD people can identify them.”

From 1990 to early 1995, the average number of ICs given to Filipinos and Indonesians was nothing less than half a million, according to her estimation.

"The areas with the highest numbers were Tawau, Sandakan, Lahad Datu and Kota Kinabalu, as well as areas at the Tawau-Indonesia border. Another area was Semporna. Many were given there because many Filipinos were there.”

Some 100 people in her team were individuals who were not working with NRD.

They also told the village chiefs who collected the ICs from them to help inform those IC holders to vote for Umno.

She did not know whether the village chiefs had received any money, but she and her team received no pay except a transport allowance.

“I volunteered myself and I went there to fight for Umno because I was an Umno member in Johor then. Hence, I was called to campaign in Sabah.”

Although not summoned to testify in the ongoing public hearing of the royal commission of inquiry on the Sabah immigrants issue, Siti Aminah hoped she will be given the opportunity to tell her story to the commission.