GE13 SPECIAL As the political parties wrangle over the final slate of candidates, the issue of who will contest and where has become more important than ever. The reason is simple: the candidate factor matters in close races.

Each side is hoping that their list will bring that extra something to the campaign, to capture the imagination of the electorate and bring home victory. 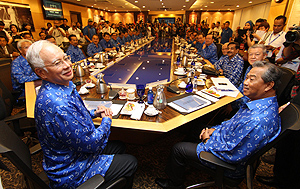 The selection process is rife with difficulties, as indicated by the slew of stories over the past few days of branch protests, minor parties crying foul, early announcements to offset challenges, leaking of ‘inside' information and repeated delays in letting the public know who will be contesting where.

This problem is especially acute in Sabah, where the campaign is essentially on hold until the seats are announced.

The jockeying for seats is a normal part of the electoral process. What makes this candidate selection process different in this election is the fact that much of this is being played out in public - on both sides - and the decisions will matter more than ever.

While candidate selection process is arguably one of the most important and difficult decisions in the campaign, the impact of the process differs for the two political camps. This article focuses on the key issues for BN chief Najib Razak.

This general election is the first opportunity for Najib to reshape his team. Traditionally when premiers go into their first polls, they use this as an opportunity to define their leadership and bring in their own people. What has been evident to date is that Najib has struggled in this process as this has been one of the most important factors contributing to the delay in the polls.

Najib has been caught politically. There are three major forces he has grappled with. The first is Najib's management of the power wielders in the party - the warlords and local kingmakers and the division chiefs.

He has to deal with the reality that many warlords and incumbents in his party adamantly refuse to stand aside and make way for new faces. It is the chiefs and warlords who hold real power in the party at the local level and they show it by clinging onto their position and resisting parachute candidates into their territory.

Najib understands that in order to get his own mandate, he needs the support of these party stalwarts to run the machinery and galvanise the grassroots. To date, Najib's campaign has rested heavily on centralised ‘war rooms' using advertising, polling and highly-paid consultants and political strategists. With the candidate selection, Najib has to make the hard choices which he has put off and move his campaign from his office to the ground.

One key element in navigating the powers within the party for Najib is the desire to remove any challenger to his leadership within Umno. This election is not just a public mandate, it is also positioning for the party polls that will come after GE13 - if his coalition wins. 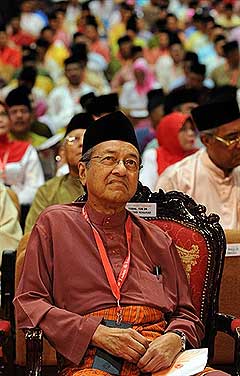 Najib knows that he has to move in his loyalists to win the support of the party. He has to put these people in winnable seats, and he has to do this without offending the powers within the party that may reinforce the positions of potential challengers to his position and that of his team.

He also knows that he cannot offend too many warlords, especially the most senior warlord, former premier Dr Mahathir Mohamad ( left ), without provoking a challenge to his position. Another of the most difficult tasks he faces is to manage those aligned to another former premier, Abdullah Ahmad Badawi, who have residual anger over the ouster of their patron who put them into office.

Najib is aware that if he pushes too many people out, he will face another block of opposition within the party. These individuals hold the majority of division chief positions.

At the same time, he faces the dilemma of appointing his people. Many of ‘his' people are not on the ground in these localities. They are based in Kuala Lumpur and are likely to be parachute candidates. By nature, these parachutists are resisted by local actors, who oppose outsiders, and by local chieftains who see them as encroaching on their patronage and position.

The end result is that Najib is treading softly and being non-confrontational with his party. Effectively, however, Najib is hemmed in by how he inherited his position, without a mandate from the party and his need to get this mandate.

Ironically, the power to chose who runs for office is arguably one of the most important means Najib has to carve out his power base. It has been used effectively by Umno leaders for decades. What is not really understood is that Umno has the lowest level of incumbency of all the BN political parties in Malaysia.

Each election, it regularly has high turnover, especially at the state level, and there has been a process of internal regeneration. For example, the rate of incumbency at the parliamentary level since 1964 for Umno is 1.6 terms, less than two terms. It is close to an average of one term at the state level.

What happens in the party is that Umno returns its senior leaders and warlords, but the majority of its candidates are replaced, usually landing into another position within the Umno system.

Historically, the most turnover happens when a premier is in search of his new mandate. This is the second challenge for Najib, the need to show that he has a new slate, that he is ‘different' and willing to bring about party rejuvenation. In 2004, for example, Abdullah Badawi brought in 71 percent of new faces in Parliament for his party (35 incumbents out of 120 Umno seats).

Even in 2008 - Abdullah's second election - there were 55 percent of new faces (65 incumbents out of 119). The pattern of new candidates varies for the other component parties, however, as shown in the table.

Generally, there is a higher turnover in Parliament than state levels (less than 50 percent historically), although the length of incumbency in Parliament on average tends to be longer.

This year, however, Najib has announced a paltry 33 percent of new faces for the entire BN for Parliament, although we will see the list in detail when it is finally announced.

This is a record low for any leader of Umno at the parliamentary level and shows that the status quo is predominating. He is more in line with the national average at the state level, but in fact is not substantially varying from past practices.

In 2008, Abdullah fielded 46 percent new faces (as compared to the 49 percent promised by Najib). Najib is being very conservative in his selections, averse to rocking the boat involving the powers-that-be within his party and unwilling to define his new brand.

This raises further questions about what Najib sees as ‘winnable'. Is keeping two thirds of the parliamentary incumbents and more than half of the state candidates the path to winning power? Are there no better candidates who can help rebrand his party and coalition?

Najib's idea of ‘winnability' appears to be to stick with the status quo. Given the polling numbers that show that a majority of Malaysians do not support his party, 47 percent according to the latest Merdeka Centre survey, this low turnover is indeed a risky strategy and unlikely to be part of any rebranding of his party.

The reason Najib is so risk-adverse has to do with the reality of sabotage. The sad fact is that sabotage is common when a person loses his or her seat. This affected the outcome in 2008 for Umno, as infighting within the party was intense.

Umno members took it out by either not going to the polls to vote, or in some cases undermining the candidate. Umno's fear of sabotage is clear given the new party rules and repeated calls on candidates to stop ‘sulking' if they lose.

Given the low apparent turnover of incumbents, Najib appears terribly afraid that infighting in his party will lead to further losses. This time round, many Umno candidates are even more worried in that the possibility of not having other goodies that come with having access to power is a possibility. This has led to the late hours and heated conversations over the candidate slate.

While it will be important to look and analyse the content of Najib's list - to see how many talented technocrats (as opposed to his loyal personal assistants as parachutists) he has fielded as candidates, the structural constraints he faces - the warlords/chieftains, his conceptualised status quo ‘winnability' and sabotage - point to real liabilities for Najib.

Even if he wins the election, the limits on his ability to engage in any reform will be hampered. For now, however, the candidate selection process and Najib's decisions showcases the realities of a party insider grappling with the difficulties of transforming a system and fundamentally unwilling to do so.

DR BRIDGET WELSH is associate professor of political science at Singapore Management University. She is travelling around Malaysia to provide her GE13 analyses exclusively to Malaysiakini . Bridget can be reached at [email protected] .