More than 1,000 supporters of Gelang Patah MCA division chief Jason Teoh, who has been dropped as the candidate for the parliamentary constituency, rallied last night to pressure MCA president Dr Chua Soi Lek to reverse his decision. 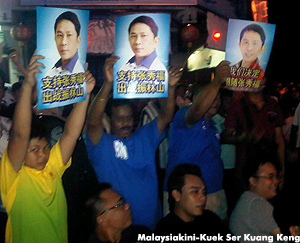 Should Teoh not be picked to contest Gelang Patah under the BN ticket, they pledged they would give their full support to Teoh to contest as an Independent candidate.

"Can he contest as an Independent candidate? Can each of us donate RM1 to him?" asked community leader Jason Ang Kian You.

The excited crowd, which had gathered at the Gelang Patah New Village where Teoh was born, responded with repeated loud shouts of "Yes!"

A representative of his 600-strong campaign team, which has halted all its GE13 activities since last night, also vowed to campaign for Teoh should he decide to contest as an Independent.

An angry Ang argued that it was unfair for anyone to claim that Teoh would only be able to secure the support of 15 percent of the Chinese voters in the constituency, the reason apparently given by the MCA central leadership for dropping Teoh. 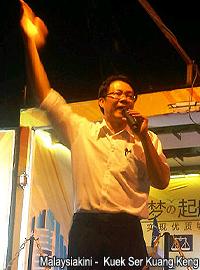 "Someone said only a few dozen people would attend this ceramah... But how can you compare a small-time singer with (Hong Kong celebrity) Andy Lau? After all, Lim Kit Siang (DAP's candidate for the seat) is the Andy Lau here," said Ang ( left ).

Several angry supporters replied with a loud cry of "ask him to go eat shit!" 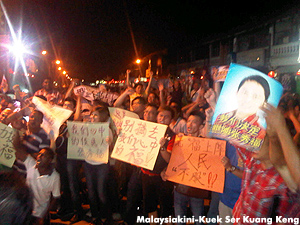 Several individuals, including a number of Indians, Malays and even a disabled man of Thai descent, who have been previously helped by Teoh, took to the stage to thank Teoh.

However, the businessperson-turned-politician was not present at the rally. Among the supporters spotted in the crowd was former MCA Pengkalan Rinting assemblyperson Low Teh Hian.

Before the rally started, dozens of pictures showing Teoh making contributions to the underprivileged and various other efforts in serving the people of Gelang Patah were shown on two big screens, accompanied by sentimental songs. 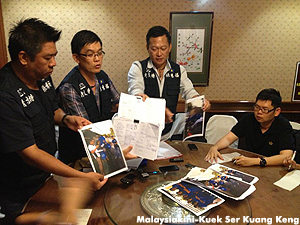 The supporters also started a signature campaign to appeal to Chua and BN chairperson Najib Abdul Razak to field Teoh in Gelang Patah.

The dispute over the BN candidacy for Gelang Patah has been brewing for some time and with today's announcement that Umno will contest this seat, speculation that its candidate will be caretaker Menteri Besar Abdul Ghani Othman is accepted as confirmed.

While Teoh's supporters were rallying, at another ceramah at the Chinese-majority commercial and residential area of Taman Ungku Tun Aminah, DAP were calling on voters to back Lim. 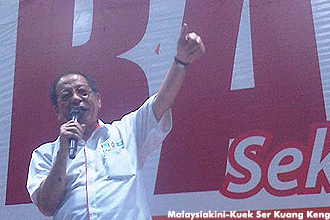 Lim ( left ), who just flew in from Penang and took to the stage at around 11.45pm, wasted no time in capitalising on the announcement that MCA would be contesting fewer parliamentary seats at the May 5 general election.

"MCA will contest 37 parliamentary constituencies but they contested 40 seats in 2008 general election and they still claim to represent Chinese?"

He also pointed out that the surrendering of Gelang Patah, a parliamentary seat with 53 percent Chinese voters, to Umno has provided a precedence where Umno can contest in MCA's Chinese-majority seats in future.

"Where can MCA show its face now?" Lim queried.