After their sudden defeat in the 2008 political tsunami, the state BN vowed to rectify its errors and retake the industrial state in the upcoming GE13.

"We have been through a perilous journey and have learnt from our mistakes," admits caretaker Prime Minister Najib Abdul Razak, who is also the state liaison chief. 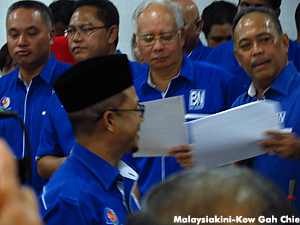 However, he believes that the time is ripe for the BN to redeem itself in the eyes of the rakyat.

"We will rectify all our wrongs," he vowed.

Najib said he is determined to return the state to the "goodness wrought under the BN rule" as opposed to what he claimed are the "empty promises" of the Pakatan-led government which has been running the state for the last five years.

"What we promise, we will fulfill; this is our pledge," he said, commenting on their manifesto for the state which will be launched tomorrow.

Najib said this while announcing the BN candidates for the 76 parliamentary and state seats to be contested in Selangor.

"This is the lineup that will not only see us win the state, but also to form a strong government," he said, hinting confidence of a two-thirds majority.

'What the rakyat wants'

After the hard lessons learnt last time around, Najib said that he and his peers have decided on a lineup that represents a big shift in the state’s political landscape, with 80 percent new faces nominated.

"We do this because this is what the rakyat want and expect."

He explained that the seats in Selangor will see Umno contesting nine parliament seats and 35 state seats, whereas MCA will be representing seven parliamentary constituencies and 14 states.

In addition, MIC is to run for four parliamentary seats and three in the state assembly, while Gerakan will contest in three state seats and one parliament seat.

PPP will have one state seat while ‘friends of BN’ will contest in one parliament seat under the BN banner.

To commiserate with Selangor's status as Malaysia's most developed state, Najib said that the new lineup will be made up of lawyers, educators, doctors and engineers - the professionals that will hopefully help re-take the industrial state.

Najib also apologised for those who feel that he and his peers in the BN leadership have done them wrong in coming up with the lineup of GE candidates.

"It is impossible to please everyone," he admitted.

However, he argued that what they did was listen to what the rakyat wanted, and that they delivered as a party which is responsive to those they serve.