KINIBIZ Genting Bhd has made unexpected corporate social responsibility contributions totalling an estimated RM190 million in the first quarter of this year, which analysts and industry sources said could be related to the May 5 elections.

Analysts said this is an extremely large amount for Genting to be donating in the first quarter, and has significantly affected its final profits. 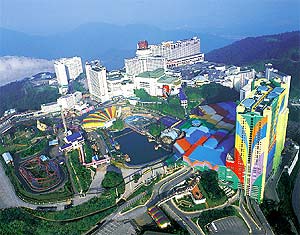 For the first quarter of this year, Genting made a pre-tax profit of RM967.6 million. If not for the donation, this would have been RM190 million or 20 percent higher at RM1157.6 million.

Analysts were puzzled that the Genting group made such a huge donation, and that too spread out over several companies, in just one quarter, significantly impacting its bottomline.

They speculated that the so-called donations could be election-related, using charities as fronts. It is normally unthinkable that such large contributions were made to charities, one analyst said. Genting officials were not available for comment.

Industry sources said that other companies may have made similar “donations”.

It was not clear to whom the Genting donations were made but analyst reports said  Genting-linked company, Genting Plantations, made a donation of RM35 million to Yayasan Gemilang 1Malaysia, a foundation whose purpose has yet to be released publicly, although it is said to be concerned with the eradication of poverty.

A search on the Internet produced no results for Yayasan Gemilang but analysts pointed out the use of the term 1Malaysia as something that could be linked to the government and possibly a “charity” associated with the general election. This could not be confirmed, however.