COMMENT One month after GE13, attention has turned to the Umno election. Rumours are already circulating about possible challengers to the ruling party's No 1 post. While the Black 505 rallies continue to mobilise protest against the May 5 general election that many recognise as seriously flawed, the dominant political party is myopically focused on its party polls and who will lead the party after October.

The flurry of activity in recent weeks - from the call to make Umno more inclusive ethnically to the pleas for the return of the 2,000 delegates as electors (rather than 146,500 members) are all part of the now intensifying internal Umno political jockeying.

All eyes are on the contest for the top leadership position, especially given that Prime Minister Najib Abdul Razak performed poorer electorally compared to his predecessor and did not fully deliver on his promise of winning back Selangor and a two-thirds majority in Parliament.

More and more calls are being made to keep the two top positions uncontested. In Umno, however, the real politics is happening behind the scenes. The grassroots are mobilising for the first stage of the party electoral process - the divisional polls.

Despite the public rhetoric, current conditions point to a competitive contest, in which if conditions do not radically change, Najib will likely face a credible and substantive challenge to his position.

There are five underlying factors that point to a challenge:

First, the modus operandi in Umno is money politics. This was a legacy of the Mahathir years and has become deeply entrenched, feeding into the concerns over corruption and governance. For many of the delegates, they join the party for the perks and invest in positions for potential financial gains.

Elections are an integral part of the financial rewards in the system as they involve the distribution of incentives. The logic is simple - the more the competition within the party, the more the incentives. Given the modus operandi in Umno, there are vested interests in fueling contests. 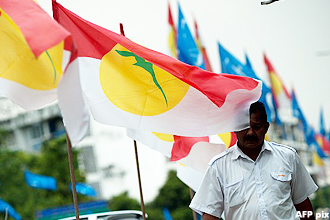 The higher the level of competition, the greater the promise of rewards. This election involves more people, so competition is costly, involving mass outlays of funds to more people than ever before. Part of the call for the return to the old 2,000-delegate system is driven by this economic ‘money politics' reality.

Second, Umno as a party is deeply factionalised. This is not unique. In fact for dominant one-party system this is the norm, as seen in Taiwan, Japan and Mexico. All political parties have some degree of internal divisions. These divisions, however, feed into competition as the leadership has to accommodate the various warlords.

Third, Umno as a party is being pressured to reform its identity after GE13. To be more precise, its Malay chauvinism is being challenged. The challenge is taking the form of calls to move the party into a more multi-ethnic entity, and be more inclusive of non-Malays. This is in response to the effective death of the BN as a multi-ethnic power-sharing coalition in GE13.

This measure initially mooted by Najib has yielded a strong reaction from the rank and file, who have come out of a polls where ethnic Malay chauvinism was stoked and ignited to bring the party faithful together against the opposition. The disconnect between the multi-ethnic initiative promoted by a national leader seeking national representation and the party grassroots embedded in their ethnic nationalist framework is real, and has caused disgruntlement among some and anger among others. 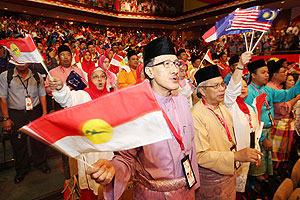 The push to maintain the openness in the party electoral system taps into this, as more numbers can openly display their rejection of transforming the party outside of Dr Mahathir Mohamad's Malay chauvinist mode.

Fourth, there is the reality of generational pressures within the party. Najib was not successful in having many of ‘his men' elected in GE13, as he hoped to garner a new cadre of leaders to support his push to consolidate his position within the party. After all, he has yet to be elected to the presidency.

The push for younger, new faces remains, but the bottleneck in the leadership is substantive. The impact is that younger leaders will by nature ally with different actors with the hope of moving up the ranks in a system that has been slow to engage in generational transformation.

Finally, amidst the structural concerns is the long-standing push for statesmanship. Many in Umno hark back to the good old days when Umno leaders were respected across the Malaysian society, and seen as national leaders to be proud of. There is division within Umno, and nationally, regarding Najib's leadership as well as his statesmanship.

He has not taken a prominent role post-GE13, and this raises questions. Najib, like his predecessor Abdullah Ahmad Badawi, faces the difficulty of meeting conflicting demands and higher expectations. This push for ‘statesmanship' leadership will be a driver for some of the potential contenders for power.

These party dynamics - money politics, warlord factionalism, party identity, generational pressures and statesmanship - all contribute to increased possibilities of a leadership challenge and greater party contention. At issue will be the new electoral system, the timing of the polls (with early polls apparently favoured by Najib) and the composition of the challenge itself.

The question being asked is whether Deputy Prime Minister Muhyiddin Yassin, who is 66 last month, will feel this is his last chance to take a shot at the top spot or someone else steps up to the challenge. Also openly being discussed is Tengku Razaleigh Hamzah, 76, who has shown a willingness to contest for Umno president in the past. It is unlikely, given the systemic issues at play, that no one will step forward.

Despite the questions around GE13 and the continued concerns with electoral irregularities, Umno feels victorious and is being portrayed as the ‘winner,' contributing to more risk-taking and competition. 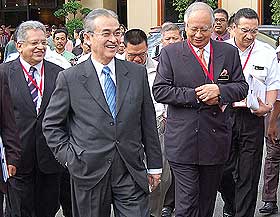 We have seen after the May 5 general election, new alliances are being forged - at least temporarily - ahead of the Umno polls. Najib has brought many of the Abdullah allies into the cabinet and he has reached out to Sabah.

He has not significantly rocked the warlord interests in most of the states as he sought more allies. His biggest ‘new' ally appears to be Mahathir who said there was 'no alternative' to Najib in a speech in Japan. But history has shown that Mahathir's fidelity as an ally is uncertain at best.

Najib has simultaneously thrown down the gauntlet by not giving Muhyiddin a senior cabinet position and holding his people at bay by not including them in the cabinet. The contest effectively began when the GE13 results came in, continued with the cabinet selection and is ongoing. The strategy of the marginalisation of Muhyiddin has begun.

In the weeks ahead, the backroom politics will only intensify. It is much too early to write off a challenge. In fact, current conditions suggest the opposite - a growing competition within Umno.

Najib will rely on the incumbency advantage, something which he had used effectively in GE13. But despite the power of incumbency, Najib's position should not yet be seen as secure, as he has to pass the test of his party in what may very well be the fiercest contests for the party leadership yet.

DR BRIDGET WELSH is associate professor of political science at Singapore Management University. Bridget can be reached at [email protected] .