INTERVIEW Former prime minister Dr Mahathir Mohamad is pushing for his son, Mukhriz Mahathir, to be among the new Umno vice-presidents in the party polls, and this may force out one of the incumbent VPs, Ahmad Zahid Hamidi, a DAP MP has opined.

DAP's Kluang MP Liew Chin Tong told Malaysiakini in an interview that this is because Zahid has never "been in the good books" of the former premier. 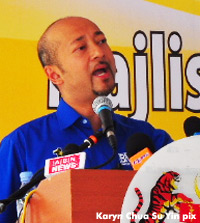 "It's quite clear that Mahathir wants Mukhriz ( left ) to contest as a vice-president, which means one of the current vice-presidents will lose," he said, pointing at Zahid as being the possible victim.

Zahid had previously in 1998 spoken out against Mahathir, calling for an end to cronyism and nepotism, and was subsequently detained under the now-abolished Internal Security Act.

The other Umno vice-presidents are Shafie Apdal, who is from Sabah, and Hishammuddin Hussein, who is Prime Minister Najib Abdul Razak's cousin and also the son of third prime minister Hussein Onn.

However, Liew said it is "too early" to determine how the Umno polls will pan out unless the party decides not to allow contests for the vice-presidency posts as well.

Currently, several top Umno leaders have mooted the idea of not allowing a contest for the president and deputy president's post in Umno in order to consolidate the party after the recent election, with Mahathir being one of those who has supported the idea.

This, Liew said, is because it is the "last chance" for Deputy Prime Minister Muhyiddin Yassin to become the party president and subsequently the prime minister.

"If he doesn't challenge (Prime Minister Najib Abdul Razak) now, then he is on his way out," he said.

He said that senior vice-presidents such as Zahid, who is the home minister, and also Hishammuddin, currently the defence minister, would be looking to further their political careers by aiming for the deputy prime minister's post, thus threatening Muhyiddin's post if he does not challenge for the top post in the party. 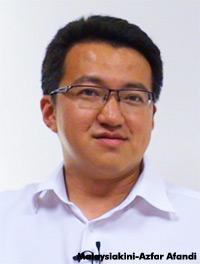 However, Liew ( left ) claimed that Mahathir might not have the confidence that Muhyiddin would garner enough support from within Umno to win the president's post, and that is why the Mahathir himself had supported the no-contest motion.

Two weeks ago, Mahathir told journalists in Tokyo that Umno had no other alternative to lead the party apart from Najib.

Liew, who is a key DAP strategist, also criticised the leadership of Najib, saying that despite being the prime minister, the latter is "not setting an agenda".

"Najib doesn't have a clear idea of what he wants to do. He is not leading, he is responding. But responding alone does not make you a leader," he said.