Abdul Aziz Bari said the government would lose its authority if Home Minister Ahmad Zahid Hamidi and Inspector-general of Police (IGP) Khalid Abu Bakar continued to vehemently oppose Chin Peng's final wishes for his ashes to be interned in Malaysia.

He reminded them that the 1989 ceasefire agreement between the government and the Communist Party of Malaysia (CPM) was signed by former premier Dr Mahathir Mohamad, with their respective predecessors in tow. 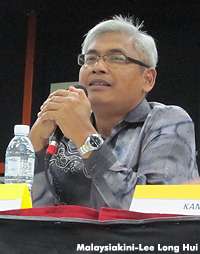 "Stop manipulating the emotions of the army and police veterans. Just put up or shut up!" Abdul Aziz ( right ), a former professor at the International Islamic University of Malaysia said in a press statement.

Khalid had said all checkpoints are being watched to ensure that Chin Peng's body was not smuggled in as Chin Peng was responsible for the death of many police and army personnel during the Emergency.

"Khalid should just shut up or ask his own predecessor as to why the police agreed to sign the truce with the communists," Abdul Aziz retorted.

Abdul Aziz said that with the signing of the 1989 document, Malaysia had tacitly recognised the communists.

"The court was wrong to reject Chin Peng's application to come back. The judges asked for documents to prove his citizenship, like a birth certificate. But they knew that it was during the height of emergency and Chin Peng - rightly or wrongly - was a fugitive," Abdul Aziz said.

He added that the court had asked the impossible from Chin Peng, who had fought British rule.

Noting that even some ex-Umno and BN leaders were also detained in the past for communist activities, Abdul Aziz said that the party should stop "demonising" communists and communism.

Cops on alert for return of Chin Peng's remains

Chin Peng - laying our past to rest, not distorting it

Read more like this :
#pkr
ADS
Most Read
Most Commented
Most Recent
ADS