The Sarawak government has been ordered to return 3,475 hectares of native customary rights (NCR) land in Sungai Lembong, Suai Miri to the Iban from Rumah Jupiter Ak Sergeran and Rumah Meringai.

This follows the finding of the Court of Appeal that the issue of provisional leases for the land to two companies by the Sarawak government was unlawful, improper and unconstitutional. 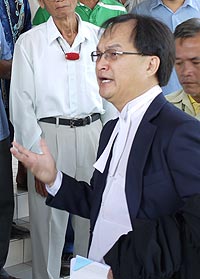 The court, which heard two cases involving the 3,475 hectares of NCR land in Kuching on Tuesday, ordered that damages be assessed by the registrar of the High Court, together with interest and costs.

Lawyer Baru Bian (right), who represented the natives, called on the attorney-general and the Sarawak government not to appeal the Court of Appeal decision, which ruled that ‘territorial domain' and ‘forest reserve' are part of native customary rights (NCR) land.

"The attorney-general and the state government should instead recognise and respect native customary rights over such land.

"Although the state government may have the right to appeal, it should not proceed with an appeal to the Federal Court," Baru said.

"I agree that the state government should not waste taxpayers' money over such appeals, especially after we have won at the High Court and more so in the Court of Appeal," he told Malaysiakini when contacted.

In the first case, longhouse chief Jupiter anak Sergeran and his longhouse residents in Sungai Lembong, Suai, Miri, sued Fung Tai Sdn Bhd over a quarry licence it was issued for their land.

Also named in the suit were the state Land Custody Development Authority (LCDA), the superintendent of Lands and Surveys in Miri and the state government. 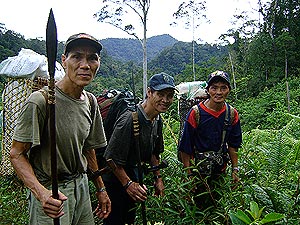 The Iban had appealed to the Court of Appeal after High Court judge Abdul Rahman Sebli in July 2011 struck out both suits on several grounds, including that the area claimed by the plaintiffs was not cleared or farmed before 1958 and therefore, no native customary rights existed.

When the two cases came before the Court of Appeal in Kuching on Tuesday, it was decided that they should be heard together.

In allowing their appeal, the three-member Court of Appeal headed by Justice Abdul Wahab Patail unanimously agreed that the Iban had, on the balance of probabilities, proved their claims to their land comprising 3,475 hectares.

Baru said that besides declaring the plaintiffs' NCR over the area claimed, the judges also ruled that the issuance of the quarry licence to Fund Tai Sdn Bhd and the two provisional leases to Butrasemari Sdn Bhd was as far as the areas which extended to the plaintiff's NCR land under the said licencee and provisional leases was unlawful, improper, unconstitutional and therefore null and void.

The areas should be excised out of the quarry licence and provisional leases.

In welcoming the decision, Baru said: "It is interesting to note that for the first time in NCR cases emanating from Sarawak, the court has declared that the issuance of the quarry licence and the provisional leases to Fung Tai Sdn Bhd and the two provisional leases to Butrasemari Sdn Bhd without first extinguishing NCR was a breach of the government's fiduciary duty to the plaintiffs/appellants.

"The decision is another victory for the natives in Sarawak.

"With this decision, we have at least five judgments from the Court of Appeal confirming the ‘territorial domain' and ‘forest reserve' rights the Ibans and natives of Sarawak have over NCR land," said Baru, who is also Sarawak PKR chief and Ba'Kelalan assemblyperson.

He has more than 200 cases involving NCR land pending before the courts in the state.