An alliance of Muslim NGOs has offered a RM500 reward for anyone who slaps MP Teresa Kok in the face and records it.

The outrageous offer was made by the Muslim Consumers Association of Malaysia (PPIM) activist Mustafa Hamzah at a rally in Kuala Lumpur this afternoon.

The move appears to be in retaliation for Kok's popular video clip , which lampooned Malaysian politics.

Umno ministers and BN leaders had predictably frowned on it.

"Those who are willing to slap Teresa Kok ( left ) will be given a reward of RM500.

"The reward will be given in cash to the young men who dare to defend the fatherland. It will be gathered from NGO Jemaah Islam Malaysia," Mustafa said enthusiastically at the rally in Jalan Tun Perak.

It was organised to 'protest against insults to Malay leadership, the Yang di-Pertuan Agong, Islam and Malay dignity, by politicians, leaders and Chinese chauvinists'.

However, Kok said that the act by the NGOs was “total madness” and said that she would lodge a police report tomorrow. 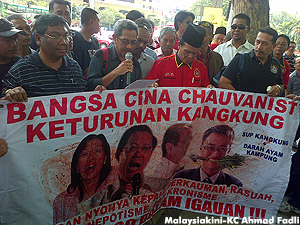 “Police must immediately take action against the person. The inspector-general of police (IGP) must speak up. In fact, the home minister must speak up,” she told Malaysiakini in an immediate response.

“Lawlessness and such an open act of encouraging violence must mot be tolerated,” Kok said.

She again stressed that she did not touch on any race, religion or the Lahad Datu intrusion in her video, and said that nobody should react to the video “based on hearsay”.

Angkatan Perpaduan Islam Sejagat Malaysia (API) chairperson Aziz Nani urged the authorities to take action against Kok if they don’t want the NGOs to take their “own action” against her.

Some of the participants also held up posters of a chicken whose head was replaced by Kok’s face, which offers RM500 to anyone who slaps Kok and records it as proof.