Back from a hiatus away from the public eye, controversial scholar Kassim Ahmad has yet again created waves by questioning the grip of a class of ulama (religious scholars) on the country and its future.

Speaking at an event organised by the Perdana Leadership Foundation, he said that Islam in Malaysia has been abused through a “priesthood caste” system.

“This priesthood caste did not exist at the time of the Prophet or the four caliphs. They only emerged about 300 years later by appointing themselves as interpreter of religion for Muslims,” he said.

“They (Muslims) view their religious leaders like gods and goddesses, that these leaders are seen to be protected from maksum (protected from sin) and must decide on everything about their lives.”

Kassim, who was in Parti Sosialis Rakyat Malaysia (PSRM) before joining Umno said this at a lecture entitled ‘The Thoughts of Kassim Ahmad: A Review', officiated by former prime minister Dr Mahathir Mohamad in Putrajaya yesterday.

He called on Muslims to return the Quran as the sole and highest source of information in Islam, and to reinterpret the holy book to suit modern times.

“I have said before that the Quran explains itself. The old method to use the hadith (Prophet's saying and actions) to explain the Quran is not very good, as this means we are saying that the Prophet Muhammad knew everything. This is ridiculous, as he is just a messenger of Allah,” he stressed.

Kassim was once accused of being anti-hadith, a charged he has denied.

Referring to the first verse of the Quranic chapter al-Munafiqun, he said Muslims are wrong to beatify the prophet. 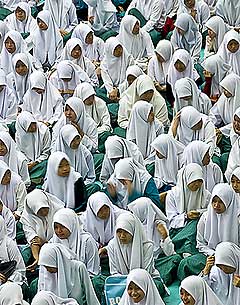 He also questioned the wearing of the tudung (headscarf) by Muslim women, arguing that hair is not part of the aurat (parts of the body which need to be covered).

Art activist Raja Ahmad Aminullah Raja Abdullah, who also spoke at a forum, urged for Kassim's ideas to be discussed by academics and politicians.

He said that, while Kassim’s views are easily understood, terms like the “priesthood caste” may not be so easily acceptable and can be viewed as provocative in Malay society.

Raja Aminullah expressed disappointment with the absence of scheduled panelist and PKR vice-president Nurul Izzah Anwar, who had pulled out at the last minute.

“Politicians often view art and culture as marginal or peripheral matters that they can attend or not attend at will,” he said, adding that Nurul Izzah may have opted out to “avoid controversy”.