While thousands of Christians in Malaysia pray and fast in the holy season of Lent which begins today, Ash Wednesday, they also wait with bated breath for the Federal Court hearing of the Catholic Church's appeal over the use of the word ‘Allah’. 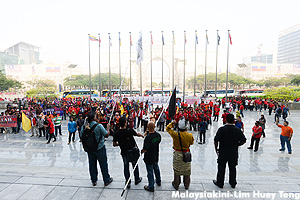 Likewise, Malay Muslim pressure groups such as Perkasa, Ikatan Muslimin Malaysia (Isma) and Jalur Tiga (Jati) are expected to converge at the Palace of Justice in Putrajaya - the home of the country’s highest court - to call on the judges to uphold the appellate court decision.

Lawyers for the archbishop of the Catholic Church are hoping to gain leave (permission) to appeal the Court of Appeal's controversial decision last October barring the church from using ‘Allah’ in the Bahasa Malaysia section of its The Herald weekly.

They had posed 26 questions altogether, which are broadly divided in three categories:

There are two additional questions filed last week. One is on whether the Court of Appeal had used the correct test when it concluded Christians are not allowed to use the word ‘Allah’ because “it is not an integral part of the Christian faith and practice”.

Second, whether the court adopts the principle of the minority must give way to the majority of the community when there is already a balance and safeguard to the position of Islam and Muslims. 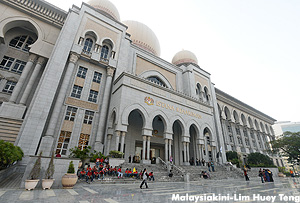 However, the Catholic Church's lawyers will first have to set aside the preliminary objections by six state Islamic councils and the Malaysian Chinese Muslims Association (Macma), which are contesting the leave application as they felt the appellate court's judgment is a finding of fact.

The Kuala Lumpur High Court had on Dec 31, 2009 decided that the ban by the Home Ministry on the use of the word ‘Allah’ in The Herald was illegal.

Lawyers representing the church have also asked for a multiracial full bench to hear the appeal. There is a possibility that a seven-member bench may hear today's application.

The court had only at one occasion sat with seven judges on the bench - the S Arulpragasam case regarding the issue of burden of proof. 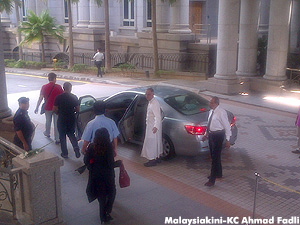 11.55am : Police escorts Archbishop Murphy Pakiam through another courthouse door and to his car.

11.27am: Justice Arifin says the bench reserves their decision for a later date.

Hearing is adjourned for a date to be fixed.

11.25am: Manjeet Singh Dhillon, representing the Malaysian Consultative Council of Buddhism, Christianity, Hinduism, Sikhism and Taoism (MCCBHST) voices concern for the rights of minorities to use the word ‘Allah’.

11.16am: Cyrus further said in The Herald ’s case, the minister have not shown any reason to ban the use of the word ‘Allah’.

Now c hurch's counsel Benjamin Dawson submits that in 1982, the word ‘Allah’ is allowed to be used for the word ‘Tuhan’ in the Alkitab.

This, he says, shows the word had been in use by 18th and 19th century Christians. 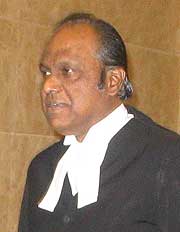 He compared the case with the banning of a book by NGO Sisters of Islam, which had been in circulation for two years' before the minister's order to ban it was issued.

"However, the Court of Appeal lifted the ban as the minister failed to show how this (the book) affected public security.

"In this case, we have been using the term ‘Allah’ with no untoward incidences," he tells the court.

10.57am: Cyrus says the minister's allegation is hearsay.

Asked by Justice Malanjum, Cyrus says The Herald had used the word ‘Allah’ for 14 years prior to 2009 with no untoward incidences.

"The minister should disclose the intelligence (gathered) to prove this."

Justice Suriyadi asks if there should be violence in order to satisfy public order.

10.55am: Cyrus disagrees with Sulaiman that ministers’ opinions on public order and public security cannot be challenged.

He cited the Federal Court decision which allowed a minister's decision to be challenged.

10.52am: Referring to a Christian prayer book, which uses the word Tuhan and not Allah, it is argued that leave should not be granted for academic purposes and must be binding on the lower courts.

10:50am: Hanif asks, “Where is the evidence that the translation of God is equal to Allah?”

10.45am: Mubashir also submits that if leave is granted, there will be a cross-appeal on 'non-justiciability'.

"Minister has the power to impose the rule to bar Herald, if he did not do so, it would be in violation of the power of the rulers to safeguard Islam," he said.

10.35am: Mubashir says, "We are dealing with mistranslation. It is not a case of Islam interfering with Christianity at all." 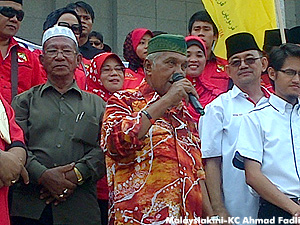 Among them is Ismail Kassim ( centre in photo), Penang's Persatuan Melayu Tanjung (Permata) chairperson, who called on all Malays, no matter old or young, to defend the name of Allah.

"If my dead ancestors can rise from the grave today, they will 'finish' them all," he said.

After completing the series of speeches, the audience sat on the floor began a recital of prayers to ask for the a quick end to the court proceedings.

10.30am: Sulaiman says there is no mala fide intention on the part of the minister to bar the word. "The minister did not act illegally to impose the ban," he added.

Earlier, Cyrus pointed out that the UN is watching closely the issue of minority religious rights.

He says the word Allah is an Arabic term imported into Christianity. 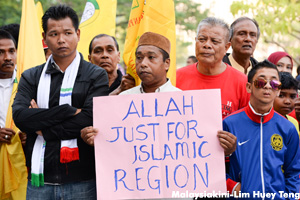 10.22am: Sulaiman says the minister is responsible for the safety of the nation and that Malays are passionate about Islam. He said that religious misunderstandings have led to differences citing the cases of Natrah (in Singapore).

He added that Christians cannot use Allah as their interpretation of God in the Malay language.

10.15am: Sulaiman Abdullah is submitting, saying the scheme of the constitution in according freedom of expression is subject to public order and morality. 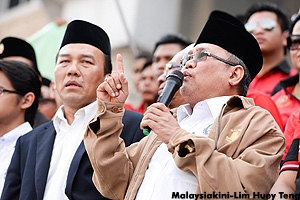 10.10am : After prayers that lasted about 45 minutes, Perkasa president Ibrahim Ali ( right in photo )invites the event host to speak to the audience.

In his speech, Ibrahim alleged that the opposition leader Anwar Ibrahim during his speech at a church in Kajang recently, encouraged the use of the word "Allah" by non-Muslims on the grounds that "Allah is the Lord of the whole world."

"Such creatures forsake their religion for the of sake political gain," he said referring to Anwar.

Strictly speaking, he added, non-Muslims are not entitled to use the word "Allah" because they do not believe in God.

10.08am: Senior federal counsel Suzana Atan begins submitting on behalf of the government, saying that the matter affects public security. She argues that Internet research should be regarded as orbiter (side comments).

10.05am: Cyrus said the appellate court's judgment is based on Internet research on the theological aspects of the religion. He said such judicial decisions should not be allowed.

9.45am: Cyrus says the judgment by the Court of Appeal has gone beyond the parties in the application.

This includes the 1.6 million bumiputera Christians in East Malaysia, who account for 64 percent of Christians nationwide.

"There are also differences of opinion over the appellate court's judgment as some say you cannot say 'Allah' in Peninsular Malaysia and this has caused confusion."

He said minority religious rights could have been affected following the judgment.

9.37am: Cyrus Das, the lawyer representing the church, begins his submissions for the leave application.

9.33am: The Federal Court is called into session.

9.20am: There are more than 80 people in the public gallery filling the courtroom to the brim. There are also scores of lawyers. 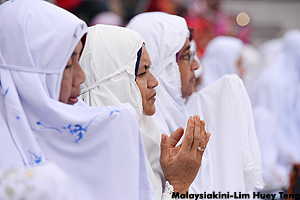 9:05am: Some Muslim attendees started to pray in front of the Palace of Justice so that the judges, hearing today's trial, will have an open heart to maintain the results.

At the same time, in a corner near the entrance of the court, a woman without a head cover stole the spotlight for awhile. She wore a black shirt with the inscription "Almighty Allah, Allah - Lord of the whole world" and held a bouquet of chrysanthemum flowers.

Known as Siti Kassim, she explained that her presence in court along with four others was to show the alternative views of other Malays, those who do not support that the use of the word 'Allah' is exclusive to Muslims in Malaysia. 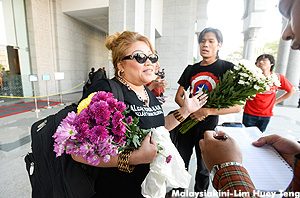 "No one should be afraid and do not think that what they display is the true Islam," she said, while distributing the chrysanthemum stalks to the public.

9.04am: Senior lawyer Cyrus Das could be leading the Catholic Church in their submission for leave.

In civil proceedings, leave (permission) has to be gained before an appeal is granted. If leave is granted, then the questions of law where some of them are constitutional questions will be heard first before the appeal.

9.02am: Malaysiakini live reports is being affected by telephone line congestion in the courtroom.

Court staff are also seen carrying extra chairs into courtroom as all the chairs have been taken up, including those at the lawyers' tables where there are many holding watching brief. 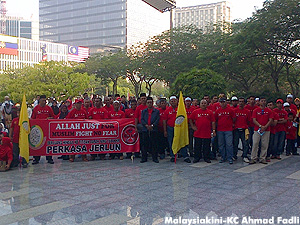 8.50am: Most of the Muslim protesters in front of the Palace of Justice wear red T-shirts.

A bus arrives with a placard announcing, 'Perkasa Kedah 02'. More protesters disembark from the bus and join the crowd.

8.30am: Besides the seven Muslim groups which stood as interveners in the application, there are several lawyers representing various Christian groups as observers in the proceedings.

The Bar Council is also an observer. 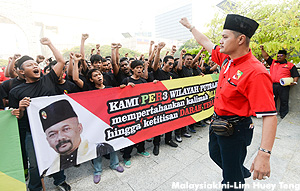 8.15am: Three buses are parked in front of the Palace of Justice where Muslim groups have drapped various banners on them, with messages such as 'Allah is for Muslims', 'Father Lawrence Andrew ( The Herald editor) Do Not Be Rude', and others.

Security is very tight as those who want to go into the courtroom are required to register and obtain passes.

8.10am - Most contending parties are already inside the courtroom. The Herald editor Father Lawrence Andrew is seen sitting next to Archbishop Murphy Pakiam. 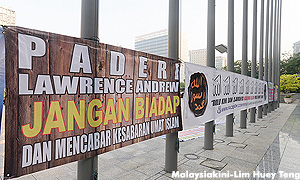 seated in the middle row, the media on the left and the Muslim groups on the right.

8.05am: Confirmed - it's a seven-member bench with Chief Justice Arifin Zakaria chairing the panel. 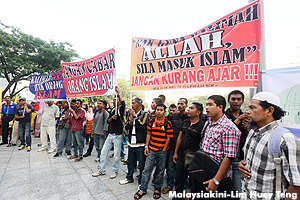 7 .53am: Archbishop Murphy Pakiam, the appellant in today's application has arrived. There is security check as people enter the Palace of Justice in Putrajaya.

For the media, 20 passes are allocated.