MH370 There is no joy this Father's Day for the families of victims on board of the lost Malaysia Airlines Flight MH370 as the aircraft remains missing for the 100th day today.

However, the quest for closure continues, and Voice370, an association for the families of the passengers and crew on board MH370 today will release a video to mark Father's Day along with the 100th day anniversary of Flight MH370's disappearance.

"We hope that through expressing our faith and longing for their returns will be able to continue knocking on the doors for the release of necessary information to help find our loved one.

"There will also be a series of articles and letters for 'Vanished 100 days'," it said in a statement.

The video and articles can be viewed at the group's Facebook page.

On a separate matter, the group said it has received a reply from the Next of Kin Committee chief Hamzah Zainuddin and will be meeting with the Deputy Foreign Minister soon.

"We look forward to the establishment of a working template in dealing with issues raised by the next of kin real soon...," it said.

Investigations still at square one

Beijing-bound Flight MH370 vanished from civilian radar in the early hours of May 8 shortly after taking off from KL International Airport. 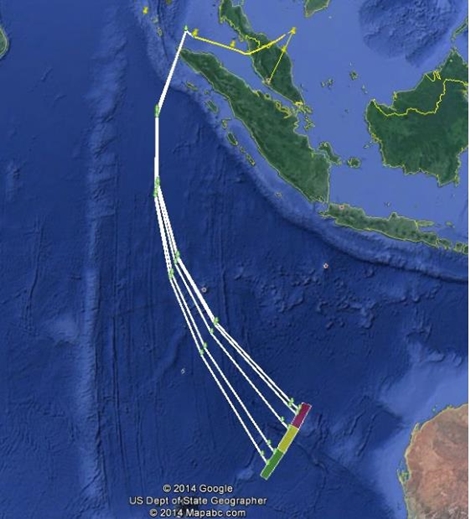 Investigators later establish the aircraft communication systems were deliberately turned off and was diverted from its intended course.

Based on satellite data calculations, investigators were confident the aircraft's final resting place is the south Indian Ocean but to date, not a single piece of conclusive evidence on the aircraft's whereabouts have been found.

Possibly the most perplexing airplane disaster in history, every investigation has turned up completely naught.

Authorities are no closer to learning the cause of the diversion and disappearance of the plane and its 227 passengers and 12 crew, nor their whereabouts.

Nor have any authority taken responsibility for the lapses that have been linked to the mystery vanishing act, such as Malaysia's failure to scramble jets at the time when its radar had detected the plane flying off course across its airspace.

Meanwhile acting Transport Minister Hishammuddin Hussein gave assurance that the government would continue to do its utmost in this search and to leave no stone unturned, reported Bernama .

"One-hundred days after MH370 went missing, its loss remains a painful void in the hearts of all Malaysians and those around the world.

"We cannot and will not rest until MH370 is found.

"We cannot and will not abandon the families of the crew and passengers of MH370.

"We will, with the grace of god, find this missing plane and so with it, begins the process of healing," he said in a statement here last night.

"As a father, on Father’s Day, I understand the anguish the family members are going through. No words could ease the pain of not knowing what had happened to your loved ones," said Hishammuddin.

Bernama also reported the PM tweeting, "On this hundredth day since MH370 went missing, remembering those on-board and their families.

Separately, MAS chief executive officer Ahmad Jauhari Yahya said the airline will continue to search for answers on what had happened to the aircraft.

"The families have been on our minds throughout these past 100 days and will continue to do so for a long while to come.

"We feel the families' pain, we miss our colleagues and friends on board MH370," Ahmad Jauhari said in statament.