Senior lawyer and constitutional expert Tommy Thomas has criticised Home Minister Ahmad Zahid Hamidi for saying that non-Malays have no place in what the minister calls the "national social contract".

Thomas described what the Umno vice-president had said as "a distortion" of what the Federal Constitution and the social contract are all about from the historical perspective.

He underlined four thrusts on what Zahid termed as the "national social contract", as those were the words the home minister used.

"These four thrusts are Islam as the official religion, Malay rulers, Malay rights and Malay language as the national language.

"His narration says non-Malays have no place in the national social contract. This is a complete distortion.

"It is selective and inaccurate. If Tunku Abdul Rahman, Abdul Razak Hussein and Dr Ismail Abdul Rahman and all the founding members of this nation are around, they would be turning in their graves with this version," Thomas ( right ) added.

Thomas was one of the three speakers at the International Law Conference in the nation's capital.

Zahid in Besut, Terengganu, on Sept 13 threatened the people not to disturb the four thrusts in the social contract.

The minister said this after the government decided to use the Sedition Act 1948 on several individuals.

Zahid (below) , who is the most senior Umno vice-president had issued the warning when launching the Besut Umno division meeting.

"Because we, Umno and the government, would ensure that the most stern legal action will be taken against those who dare to do so.

“I would like to stress here that there will be no compromise in this matter and to whom it may concern don't try to challenge the federal constitution," he had said.

Meanwhile, Thomas said the three major races had reached a consensus in power sharing when the country achieved independence and this is described as the social contract. 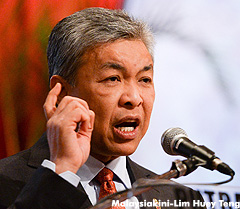 "Even the chauvinistic of all Malay leaders then (in the 1940's)  never called on the wholesale repatriation of Chinese and Indian immigrants from Malaya," he explained.

Thomas said that non-Malays were awarded citizenship under "jus soli" (right of the soil) to cut ties with their countries of origin.

He noted that the social contract agreed by the three communities under the watchful eyes of the British prior to Merdeka were the pre-conditions for independence that non-Malays received full citizenship, had the right to use their language and practice their religion.

"The non-Malays had to agree to the protection that the Malays have reserve land and enjoy employment in the public service so as to enable them to ascend the economic ladder. In this equilibrium, the non-Malays are not to be relegated as second class citizens as there is no apartheid partition or repatriation.

"What was required from the non-Malays at the time of Merdeka was undivided loyalty to the new nation. Diversity was encouraged and no pressure to make it into a one Malaysia race," he added.

Assimilation, he said, was out of the question and Malaya must always remain a plural society.

Thomas also pointed out that following the 1969 racial riot, the Rukunegara was formed where the commentary stated that the nation lived together in harmony, worked together for independence and worked together against several encroachments on national integrity.

"It further states that there should not be any discrimination of any citizen on the grounds of religion and individuals and groups shall conduct their affairs as long they do not violate any of the accepted behaviour that is arrogant and offensive to the sensitivities of any group."

"No group should question the loyalty of another citizen on the grounds that he or she belongs to another community," he added.

Hence, Thomas said it was wrong for Umno to push the agenda of “ketuanan Melayu” (Malay hegemony), which he claimed required a falsification of Malaysia's history.