MP SPEAKS It is a great relief the crisis of Selangor MB has finally been laid to rest. But rest assured Pakatan's nightmares are far from over. A lot of soul searching needs to be done. The top leaders of Pakatan badly need to go to the drawing board again to devise and revise its strategies and priorities in order to reclaim the support from all Malaysians.

As far as I am concerned PAS is the most vulnerable at this juncture. Its flip flop stands in Selangor fiasco puzzled not only its friends in Pakatan but also some of its own leaders. Maybe Umno also shared the same puzzlement so much so it did not feel there was a need to capitalise the issue to its political advantage.

Umno's inefficiency in capitalising on the Selangor issue appears to have upset former PM Dr Mahathir Mohamad. To be fair to Umno, when its political enemies had assumed Umno' role in self-destructing their own political survival, what more it could do to aggravate the damage?

No doubt PAS is the most important partner in Pakatan. Whatever one may perceive about PAS, the destruction of PAS is not good for Pakatan. In the same vein the strength of PAS is a bonus to Pakatan.

Be that as it may, the partners in Pakatan must galvanise all the options they have to ensure PAS remains in Pakatan. No doubt the only winner if PAS is out from Pakatan would be BN.

But to stay in Pakatan, PAS itself needs to change. No, it must change. Failure to change is not an option for PAS.

The change, as far as I am concerned, must emanate from its top leadership. Like or not the top leaders of PAS have frustrated many Malaysians, particularly those who voted for PAS in the last general election. In fact many believe that PAS has unduly betrayed their trust and vanished their hopes.

Two entities in PAS are the prime sources of political bewilderment to many. First is the PAS' president and the second is its syura council. The way these two entities seemingly exerted their power even within PAS has frightened those outside PAS. Of course the latter were justified to show their utmost concern, as this is the party that they have placed their trust, together with DAP and PKR, to helm political leadership in this country. 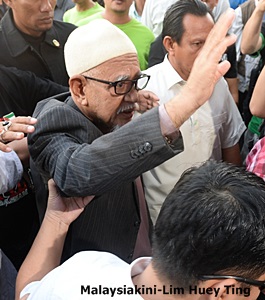 In Selangor fiasco the president and the syura council had unfortunately failed to seize the golden opportunity in exhibiting exemplary leadership in handling the crisis. It goes without saying that a true and able leadership is gauged when a leader is tested with crisis and tribulation.

The way these two entities in PAS handled the Selangor menteri besar issue left many to bewilderment and frustration thus eroding any residual trust they had in PAS.

It seemed that in venturing their decision making process the president and the syura council failed to display wisdom, humility and tolerance, which are the hallmarks of prophetic leadership shown by the beloved Prophet Muhammad (peace be upon him).  Instead people saw anger, vengeance and even arrogance reigning supreme

There is another thing which has become the source of concern for many Malaysians in the way PAS showed its stand vis a vis the issue of appointment of a new Selangor MB by His Highness the sultan of Selangor. Yes, the royal institution , being part of our constitutional make up, deserves our utmost and undivided respect and honour.

PAS has to resign to the fact that the idea of power sharing in governance is still new to the party. Many Islamic movements such as PAS would face this critical challenge in their political journey to power.

The success or failure of power sharing depends on the ability of the players in such a scheme to make necessary adjustments in their political manoeuvre. In a power sharing paradigm the threshold of tolerance is very high indeed. Thus to remain viable, all actors in power sharing agreement must be able to focus on long term rather than short term gains.

PAS needs to make necessary and bold adjustments to its strategies and priorities in order to keep it relevant to the current and future political scenario. The adjustment does not call it to forgo altogether its core principles. Taking into account that Islam is rich with excellent and persuasive traditions and precedents, I do not see PAS should feel it is constricted by Islam in order to readjust its political manoeuvre.

To think otherwise means to deny the richness and vastness of Islamic traditions and worst still, to deny the capability of Islam to remain relevant  at any periods of time.

Don't forget people are the boss

PAS needs constant reminder that it operates within the democratic system to compete for power. But power resides in the people namely all Malaysians. To claim power from Malaysians, PAS leaders have to convince Malaysians that they are ready and willing to represent them in its quest for political leadership.

PAS equally has to respect the sanctity of democracy and be willing to defend it. It needs to honestly address the legitimate concerns that Islamic movements are using democracy to climb the ladder of power only to destroy it once they are in power.

But the most important, it has to prove its sincerity through actions rather than its verbal and rhetorical expression. In politics your actions speak louder than your tongue.

Political power is about trust. Trust, like Rome, is not built in one day. It has to undergo a long, painful and tenacious process. You need only one day to destroy the trust and once it is lost, you may need hundred years to rebuild it. A fragile trust is like a sand castle easy to be destroyed.

If PAS wants to stay relevant in Malaysian politics it has to build a solid and embedded trust among all races and religious beliefs in this country. Until and unless such a trust is solidly grounded, there is no point for PAS to expect its Islamic products would attract the market. In this respect, PAS badly needs a bold and major rejuvenation. This perhaps the first step for PAS to rebuild its trust and reclaim confidence, if any, from the people.