"Yesterday morning, Anwar was suddenly taken out from consultation at HKL.

"Subsequently, Anwar was rushed back to prison before 12pm, with no treatment whatsoever," said lawyers N Surendran and Latheefa Koya in a joint-statement today.

The lawyers said this was despite Anwar requiring urgent medical attention due to his chronic shoulder injury and other conditions.

However, the lawyers pointed out that Noor Hisham ignored the family's request to replace the head of the medical team Dr S Jeyaindran who acted as a prosecution witness against Anwar.

"The fact remains, despite all the '17 experts' on the panel, Anwar has still not received treatment, and remains in constant pain while his condition worsens daily. 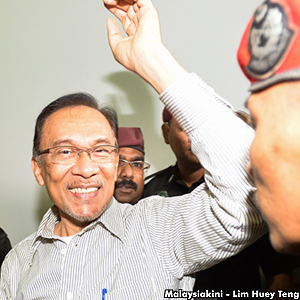 "In view of this situation, Anwar and the family can have no real confidence in the medical management of Anwar's condition by the team headed by Dr Jeyaindran," said the lawyers.

Surendran and Latheefa added that despite Noor Hisham's assurances, the fact was that the diagnosis and treatment for Anwar had been "unnecessarily and unreasonably" delayed since February.

Anwar is serving a five-year jail sentence for sodomy, a charge he claims is politically motivated but the authorities insist otherwise.

"The government has a duty to ensure that international standards such as the UN Standard Minimum Rules for the Treatment of Prisoners (the Mandela Rules) which was recently revised in 2015 are complied with.

Noting that Anwar had yet to receive the needed medical treatment, Paulsen said the former opposition leader was a prisoner of conscience and deserved better treatment than what he is currently receiving.

"We therefore call upon the authorities to provide Anwar with immediate medical treatment to meet his specialised medical needs and to ensure that his health does not deteriorate further," he said.