"A sales assistant who operates online sales of my latest book on the website zunar.my has been called for police investigation at Dang Wangi next Monday under the Sedition Act," he said in a statement today. 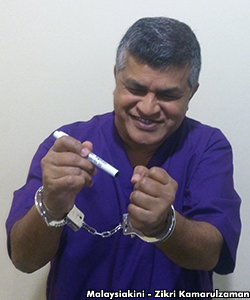 Zunar (photo), whose real name is Zulkiflee Anwar Ulhaque, condemned the probe as a way to scare the public from reading his work.

"My sales assistant did nothing illegal as 'Sapuman-Man of Steal' is not officially banned by the government," he added.

This is the second time police had called in those linked to Zunar's online store for questioning.

Announced on Sept 10, "Sapuman - Man of Steal" became Zunar's 18th comic book. The cartoonist has had seven of his books banned by the government.

Two of the bans were lifted last year by the Court of Appeal, which ruled that cartoons were unlikely to disrupt public order.

The government obtained leave to challenge the appellate court's decision in May.

Malaysiakini has contacted the Dang Wangi police and is awaiting their response.