“What makes him think Chinese ambassador Huang Huikang's visit (to Petaling Street) is about seeking a godfather assistance? Why must he or those like him always want to play the racial game?” he asked.

“With such a mentality from people like Tajuddin, the country can never produce a just and fair society. Our nation will not move forward progressively.

“On behalf of Malaysians, I can also warn him by giving a flying kick which is harder and longer than his hand,” said Yong.

Yong (photo) added it was people like Tajuddin that would cause BN to lose votes. 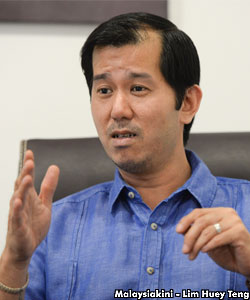 This, he said, is especially from amongst the urban electorate or those who are fence-sitters.

“I hope Prime Minister Najib Abdul Razak will take stern action against him by suspending or terminating his services as deputy minister,” he said.

Yong, who is also a lawyer, was commenting on Tajuddin's remark today where he warned Malaysian Chinese community not to take their grouses outside of the country or risked getting slapped.

" Nak kena lempang macam itu (Going to get a slap, if like that)," Tajuddin had said at a press conference in Kuala Lumpur.

He had also called on the Chinese Malaysians to stop 'fantasising' about external powers coming forward to defend them.