Petaling Jaya Utara MP Tony Pua has rubbished 1MDB's claim that its documents confiscated by investigators was holding back the Finance Ministry-owned company from submitting its audited accounts on time.

Pua said this explanation was merely to "cover up" 1MDB's intention from the start not to submit its audited accounts by the Sept 30 deadline.

"The excuse is so lame because it was already discovered by the Public Accounts Committee (PAC), during our meeting with 1MDB’s auditor Deloitte Malaysia, that Deloitte was not requested, nor was it allowed, to commence its audit as at June 2015.

"The then PAC chairperson Nur Jazlan Mohammad told the press at that time that Deloitte has yet to be directed by the Finance Ministry to commence the audit. This was more than three months after the financial year has ended.

"Hence, the claim that all the documents are with the relevant investigating agencies is but a lame excuse to cover up the fact that 1MDB never intended for its accounts to be published by Sept 30," Pua said in a statement today. 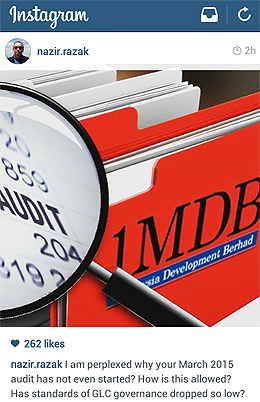 1MDB was reportedly granted a six-month extension to submit its accounts from the deadline of Sept 30.

The company was raided in July as part of an investigation on the deposits of RM2.6 billion into Prime Minister Najib Abdul Razak's personal bank accounts.

Pua pointed out that since 1MDB's inception in 2009, it had never once submitted its audited accounts on time.

"Such complete disregard for timely regulatory compliance demonstrates 1MDB's contempt for good corporate governance and financial accountability, where the prime minister is the chairperson of the Board of Advisers," he said.

He added that even if the documents were with the relevant authorities, it would not be difficult for Deloitte to gain access to them.

"The question that (1MDB group executive director and president) Arul Kanda needs to answer is, has Deloitte already been given the green light and instructions to commence audit on the 1MDB holding company?

"Or is it Arul Kanda’s strategy of covering up the shenanigans in 1MDB by perpetually delaying the completion of 1MDB’s books until such a time when all the company’s assets are stripped to plug the missing billions of ringgit?" Pua asked.

Arul was quoted by The Edge Financial Daily yesterday as saying that 1MDB's accounts were ready and that only "additional documentation" was needed.