Two DAP elected representatives who visited Gua Musang in Kelantan recently said they were shocked to discover that the parents of the Orang Asli children were not notified by the school that the pupils were missing from the hostel.

MP for Batu Kawan Kasthuri Patto and Damasansara Utama state asseblyperson Yeo Bee Yin ( photo ) said the parents came to know their children were missing from the SK Tohoi hostel from a security guard there and by word of mouth from other Orang Asli villagers. 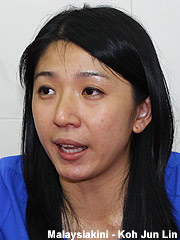 And, upon checking at the hostel, they learnt that their children had been missing since Aug 23.

Kasthuri and Yeo said the SK Tohoi authorities made a police report on Aug 25, two days after the children went missing.

It is believed that the children went missing after their older siblings were penalised by the school auhorities for swimming in a nearby river.

The authorities arrived at Pos Tohoi for a search-and-rescue (SAR) mission on Aug 27, four days after the children went missing.

“The burning question here is why it took four days for the authorities to launch the SAR when knowing very well that they would be scouring and combing through rugged, unforgiving terrain that would be virtually impossible for children to survive without basic survival skills and tools?

“There was no official missing children listed by the school until at a much later stage in the development of the case,” Kasthuri ( photo ) and Yeo said in a statement today.

“Why had the parents of the Orang Asli children not been officially notified by the school authorities as their children had been under the care and jurisdiction of SK Tohoi and its wardens when they had gone missing?” they asked.

“Is there a different set of standard operating procedures between SK Tohoi and other schools in the more urban areas for informing parents of missing children and reporting such an unfortunate incident to the authorities?”

“Had this happened in a city, would the school authorities wait for days on end to formally inform the respective families?”

The MPs also claimed that the “already distraught” parents and the Orang Asli communities were prevented by the authorities from organising their own SAR.

They said the Pasukan Gerakan Am Senoi Praaq, which is an elite team under the police and consists mostly of Orang Asli men who are experts in jungle terrain, were only deployed on Sept 29.

“That was more than a month after the children went missing and, suspiciously, after the visit by Deputy Prime Minister Ahmad Zahid Hamidi,” the MPs exclaimed.

“The parents had been left in the dark on the developments of the SAR from day one and had to scavenge for information as and when they were able to communicate with the relevant authorities,” Kasthuri and Yeo said.

“In the period of 47 days, we were told by the parents that representatives from the Welfare Department had showed up only once at the house of one of the parents and within earshot, asked for them to be patient,” they said.