MP SPEAKS On the 28th anniversary of the Operasi Lalang, it is more apparent now than ever that BN risks too much letting go off the demon of Operasi Lalang with increasing numbers of arrests and charges under the Sedition Act, Security Offences (Special Measures) Act (Sosma), Prevention of Terrorism Act (Pota), Peaceful Assembly Act (PAA), Prevention of Crime Act (Poca) and the Printing Presses and Publications Act (PPPA). 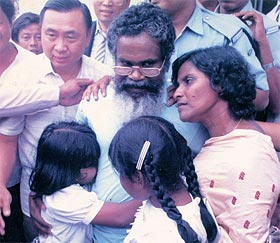 At 11.50pm on Oct 27, 1987 my father P Patto (photo) was heartlessly taken away not from his duties as an MP but as a husband and father when he was arrested under the cruel pitiless Operasi Lalang crackdown charged under the Internal Security Act.

Oct 27 will always remain a poignant date etched in the memories of the 119 detainees, their families, my mother and myself, who had been wrongfully and unjustly imprisoned under the Internal Security Act (ISA) in the major crackdown against critical voices against draconian oppressive, and regressive policies of the then BN government.

Seventy of them were released within the first 60 days of investigation and the remainder 49 including seven DAP MPs were served with two-year detention periods in Kamunting Detention Camp in Taiping.

In the old and tattered book entitled 'The Real Reason: Operation Lalang ISA arrests 27 October 1987', one can read the real reasons fabricated and manipulated by the then authorities to not just nab but to intimidate the men and women who weren't afraid to voice out their thoughts against an autocratic and an imperious BN regime.

Those who were arrested had various baseless and unjustifiable charges against them, but the most glaring ones were against the DAP MPs which were the most heinous.

The number of charges against the five DAP MPs totalled a whopping 34.

The last allegation, which was against my father P Patto and Mr Karpal Singh (photo) , was a clear fabrication of lies and deception as no such function was held at the junction of Jalan Laksamana and Jalan Foo Choo Choon on that day. 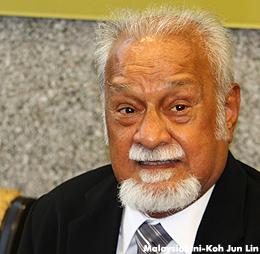 While in essence, the home minister appeared adamant and resolute to lock up as many voices of conscience and resistance as he could in 1987, it was also ludicrous and nonsensical that despite thorough explanations by P Patto denying the existence of such an event, he was still charged under it.

It is 2015 and we see the demon of Operasi Lalang rearing its ugly head again with its increasing number of arrests and charges of MPs, state assemblypersons, lecturers, students and student leaders, a cartoonist, members of the civil society and such under the brutal, draconian Sedition Act, Sosma, POota, PAA, Poca and the PPPA.

An article like this does not raise eyebrows for the Malaysian public any more.

And the answer is obvious - fundamental human rights have not only been trampled on but has been ensured that it is culled even before it stems.

Karma as we know it creeps up when we least expect it.

We have Dr Mahathir Mohamad who was prime minister of Malaysia and home minister from March 17, 1986 till Jan 10, 1999 who to this day denies responsibility on iron-fisted abuse of the already oppressive ISA which saw thuggish arrests of 119 voices of dissidence against the government.

Mahathir has yet to apologise for the prostitution of democracy and human rights in Malaysia during his authoritarian rule for 22 years. 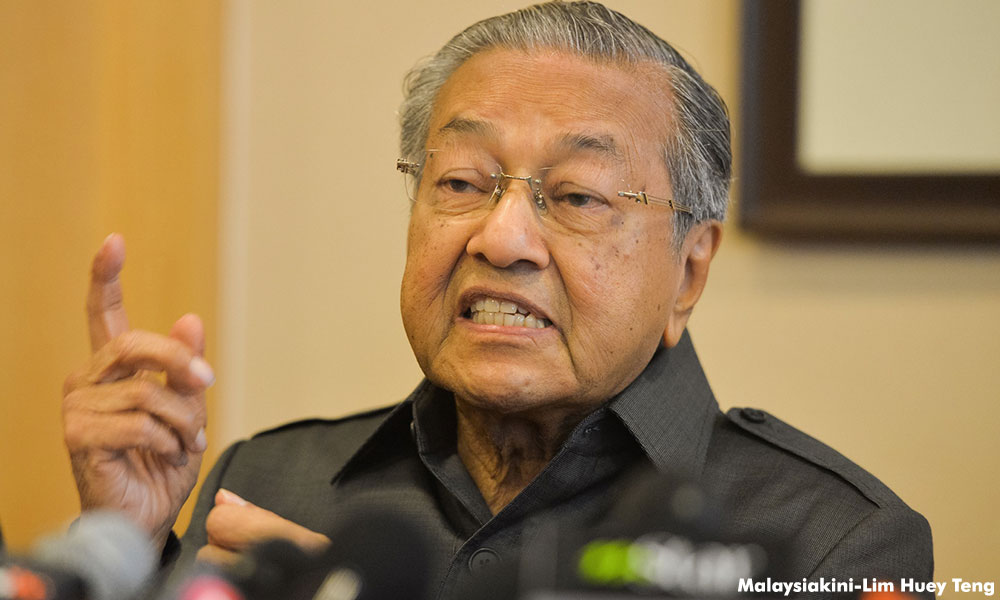 Mahathir (photo) may not be 'in power' now but the seeds of abuse of power, oppression, brutal injustice and selective persecution still continue to grow wild like the lalang he once attempted to weed out in 1987.

The decay, decomposition and rot of human rights in Malaysia is more prevalent now under the various acts like the Sedition Act, Sosa, Pota, PAA, Poca and PPPA available to be violated at BN's whims and fancies.

On the 28th anniversary of the Operasi Lalang, it is more apparent now than ever that BN risks too much letting go of the demon of Operasi Lalang with increasing numbers of arrests and charges under the Sedition Act, Sosma & Pota, PAA, Poca and the PPPA.

Malaysia and Malaysians can only have a future if BN can put aside and rise above inter-party and intra-party tussle of power to put nation-building and upholding the Universal Declaration of Human Rights by abolishing acts that dissolve and suppress freedom and justice in this land.

I have no confidence in the prime minister not because of the RM2.6 billion donation or the 1MDB scandal but because of his mammoth U-turn and backtrack after making a promise to repeal the Sedition Act, but he had reinforced it with his purulent disregard in upholding fundamental liberties and human rights for all Malaysians - even the voices of dissent.

KASTHURI PATTO is the MP for Batu Kawan and vice-chairperson of Wanita DAP, Penang.