A PKR parliamentarian has panned the National Security Council Bill that has just been tabled in Parliament, which he believes will only give excessive powers to the prime minister and endanger civil liberties.

Padang Serai MP N Surendran said the Bill, due to be debated in Parliament, “is definitely a matter of grave concern” to all Malaysians.

“It gives arbitrary, extensive and dangerous new powers to the prime minister personally, and to the new eight-person National Security Council proposed under this Bill,” Surendran said in a statement today.

Citing clause 18(1) of the Bill, he said it would allow the prime minister to declare any area in the country as a “security area”.

Security forces, which include the armed forces, will be given wide powers within the security area. 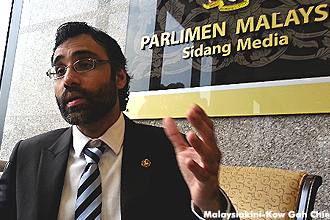 Further highlighting the seriousness of the matter, Surendran ( photo ) said there will be no limit placed on the size of the area that can be declared a security area.

“A large part or even the whole of Malaysia can be declared a security area,” he pointed out.

“Further, the prime minister on his own can indefinitely extend the initial six-month duration of the declaration of a security area.”

What is more unusual, he said, is how the prime minister is given the enormous power to declare security areas when public order comes under the home minister.

“There appears no precedent for this in our legislative history.

The government tabled the Bill yesterday , to give the National Security Council (NSC) extensive powers to deal with national security issues.

This includes declaring any area as a security area if the authorities are convinced that there is the likelihood of harm to people, territories, key infrastructure and the economy.

Meanwhile, describing the role of the director of operations appointed by the NSC, Surendran said he or she would be given powers that include evacuating people from their homes and resettling them; imposing curfews; and wide powers of arrest, search and seizure, including entering and searching homes.

Under Clause 30, the operations director or anyone authorised by the director would have the power to take temporary possession of land and buildings, which includes homes, if necessary by force, said Surendran.

Why stop inquests in security areas?

“This infringes upon the sacrosanct right to property, and may be in breach of Article 13 of the Federal Constitution as well.”

Clause 35, on the other hand, provides that magistrates may dispense with inquests where persons have been killed as a result of operations by security forces.

However, the PKR lawmaker for Padang Seri argued that an inquest was essential in any case of suspicious death.

“What reason can there be to stop inquests in security areas? Not holding inquests may encourage abuse of power by the security forces, including custodial abuse,” he said.

Citizens would also have no legal recourse to courts against wrongful acts committed by the NSC, director of operations or security forces, he said, citing Clause 38.

“This new Bill is entirely unnecessary and excessive. There are stringent laws already available dealing with serious threats to the nation, including Prevention of Terrorism Act (Pota) and Security Offences (Special Measures) Act (Sosma).

“There are no existing threats to our nation, whether internal or external, that even remotely justify these drastic new powers.

“We call upon the government, in the interests of the people and the nation, to withdraw this Bill in its entirety,” Surendran said.