The bill, which allows the NSC to declare a place a “security area” and impose emergency-like conditions, must be pushed through today if it is to be passed by the end of this parliamentary session.

“We should all bear in mind that a caretaker prime minister facing defeat in an election can still activate the powers granted to him by the NSC Bill.

“Without functional institutions of executive accountability, without leadership based on responsibility, Malaysia’s parliamentary democracy is in grave jeopardy,” Institut Rakyat director Yin Shao Loong said in a statement today.

Polls have shown that Najib's popularity has dipped amid corruption allegations, including the discovery of RM2.6 billion in his personal bank accounts.

More than 150,000 people thronged a rally in Kuala Lumpur in August to demand his resignation, but Najib denies wrongdoing. 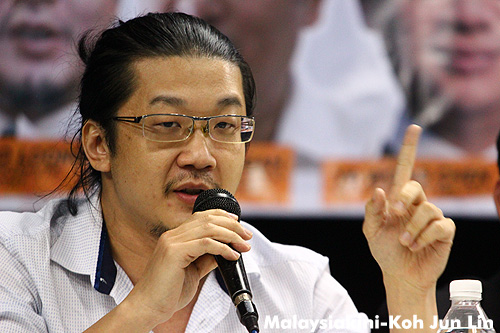 Yin ( photo ) said the use of the Security Offences (Special Measures) Act (Sosma) to detain 1MDB critic Khairuddin Abu Hassan and his lawyer Matthias Chang shows how such laws can be abused.

“The tabling of this law represents an extremely dangerous step for Malaysian politics as it concentrates far too many extraordinary powers in the hands of a single member of the executive arm of government.

“Furthermore, the prime minister has seen his popularity and legitimacy crumble in recent years due to allegations of scandal.

“We have the double jeopardy of dictatorship-like powers and a desperate politician facing a widespread crisis of confidence,” Yin said.

The bill, first tabled on Tuesday, has received widespread criticism from lawyers and civil society for giving the NSC excessive powers, could lead to abuse.

The NSC is an eight-member panel headed by the prime minister.

Among others, the bill allows the NSC chairperson to declare a place a “security area” following threats to the people, economy and infrastructure, and to deploy security forces to the area.

A curfew can be declared in the area, and security forces can search, seize and demolish property.

The declaration is valid for six months with Parliament's approval, but can be renewed on a six-monthly basis indefinitely, with the consent of Parliament.

Yin noted that the Bill not only concentrates the power of the military and police under the prime minister, but also gives him similar powers as the Yang di-Pertuan Agong.

Under Article 150 of the Federal Constitution, emergency can be declared by the Agong on the advice of the executive, and laws under the emergency are promulgated after the declaration.

Khairuddin and Chang are facing trial in the Sessions Court on a charge of attempting to commit sabotage by lodging complaints against 1MDB with international enforcement agencies.

They were held for more than a month because police deemed this a security offence under Sosma. Khairuddin and Chang were released when the court said the offence is not a Sosma offence.

“There is ample cause for concern that similar abuse can be perpetrated via the sweeping powers of the NSC Bill, which also allows the authorities to dispense with inquests into the use of lethal force.

“Mechanisms of check and balance, normally found within parliamentary democracies, are either absent or severely compromised in Malaysia,” Yin said.