Chemicals used in vape juices are the same linked to severe lung diseases, a Harvard study has shown.

One of the chemicals used is diacetyl, which is used in microwave popcorn and cotton candy and has been found to cause a respiratory ailment, bronchiotis obliterans, or ‘popcorn lung’, the study found.

The study, published by the journal Environmental Health Perspective, comes as the Health Ministry cracks down on the sale of vape juices containing nicotine.

According to the study, diacetyl was found in 39 of the 51 e-cigarette flavours tested.“This is including flavours that have particular appeal to children, teenagers and young adults,” the study says.

It also found at least one of three flavouring chemicals in 92 percent of the flavours tested.

The other two chemicals are 2,3-pentanedione (a diacetyl replacement) and acetoin, which is often used in making caramel, butterscotch, pina colada and strawberry flavours.

“This includes several e-cigarette flavours that are not candy or fruit-flavoured, such as ‘classic’ and ‘menthol’,” the study by Joseph G Allen et al, shows.

Health concerns well recognised in US

The report said the health concerns of inhaling diacetyl and other flavouring chemicals are well-recognised by the US Labour Department’s Occupational Safety and Health Administration (Osha).

Factories using these chemicals have been issued warnings that the inhalation of fumes, “especially if the flavour is heated, may cause severe adverse health effects”.

However, the same warnings are not given to vapers who use these flavours, it said. 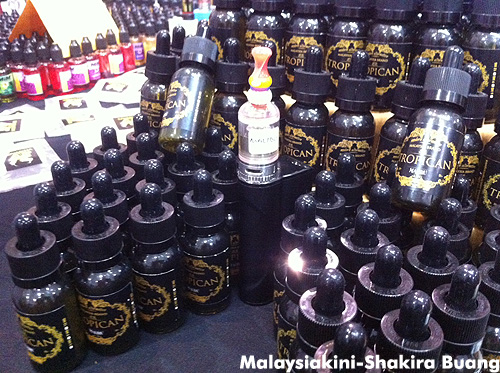 “By applying occupational health limits to the general population of flavoured e-cigarette smokers, we would thus be accepting a higher risk than typical,” it said.

Further, the risk for workers is based on exposure during working hours, while vapers may be smoking beyond those hours.

The risk would also be different for adolescents or children, the study said, since they have lighter body weight compared with the typical adult worker.

Health experts in Malaysia are campaigning for a ban on e-cigarettes, raising concerns over the chemical content and vaping among teenagers.

However, vaping industry associations have called for regulation, instead of a blanket ban .

The industry is now regulated through various laws, including the Poisons Act, which bars the sale of liquid nicotine by unlicensed sellers.