MP SPEAKS Malaysians do not want to hear from Deputy Prime Minister Ahmad Zahid Hamidi or even by the Malaysian Anti-Corruption Commission (MACC), as they want Prime Minister Najib Abdul Razak himself to stop procrastinating and prevaricating and to give full and satisfactory accountability on the RM2.6 billion “donation” and RM55 billion 1MDB twin mega scandals.

Having misled the nation and MPs to wait for six weeks for the last day of Parliament on Dec 3 to answer all questions about the twin mega scandals, Najib should not disappoint Malaysians a second time – and his winding-up speech at the Umno general assembly later today is the last opportunity for him to come clean on the RM2.6 billion “donation” and 1MDB scandals.

The 1MDB scandal went back to more than six years ago, when 1MDB was incorporated in 2009 after its precursor, Terengganu Investment Authority (TIA), was turned into a federal agency, with the unprecedented Clause 117 in the 1MDB's Memorandum and Articles of Association requiring the prime minister's written approval for any of 1MDB's deals, including the firm's investments or any bid for restructuring, amendments to the company’s Memorandum and Articles of Association and Appointments and removal of directors and senior management team of 1MDB.

The RM2.6 billion “donation” scandal is more recent, going back to March 2013, just before the 13th general election on May 5, 2013, but awareness in the corridors of power that “something is rotten in the state of Denmark” did not begin only on July 2 this year when Wall Street Journal (WSJ) shook the country and the world with the scoop about the RM2.6 billion “donation” in Najib's personal banking accounts in March 2013, but much earlier.

This is because the WSJ report of July 2 had referred to Malaysian government investigators who had traced deposits of almost US$700 million into Najib's personal accounts via agencies, banks and companies linked to 1MDB although the original source of the funds was unclear and the government investigation didn't detail what happened to the money that went into Najib's accounts.

WSJ has subsequently reported that government investigative documents show Najib as playing an important role at 1MDB at key moments over several years, including authorising several of its investments, a leading role in raising billions of dollars in financing for the fund, and personally ordering the removal of the 1MDB fund’s auditors when they wouldn’t sign off on its books.

Najib authorised the fund to make investments of millions of dollars although some board members had raised concerns about them. 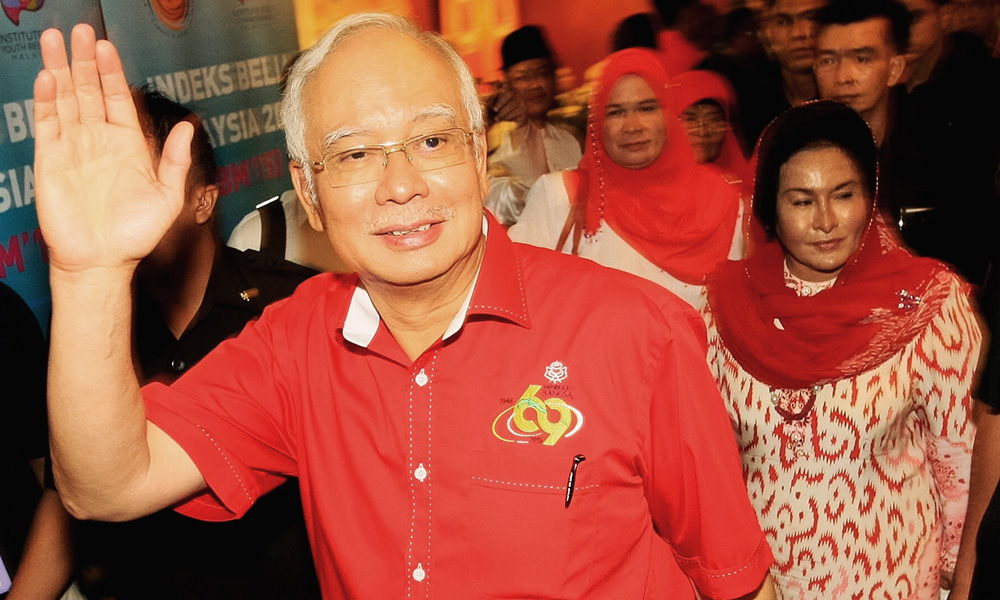 Let Najib (photo) therefore stand up before the Umno delegates and give a full accounting on the twin mega scandals, and answer the thousand-and-one questions which had surfaced in the past five months, including the following eight questions:

What were the “strings” attached to such donations?

Yesterday, Zahid created consternation and incredulity all round when he claimed that his statement a day earlier that there was more than one donor behind the RM2.6 billion donation deposited into Najib's personal banking accounts did not contradict the Malaysian Anti-Corruption Commission (MACC) which had maintained that there was only one donor for the RM2.6 billion “donation”.

Was it one donor or more than one donors?

We do not want to hear from Zahid or even MACC, but from Najib.

'Meeting rep is not meeting donor'

In August, Zahid told the press that he had met the chief investment officer of the donor and the financial trustee of the family of the donor – which meant he had never met the “donor” himself. 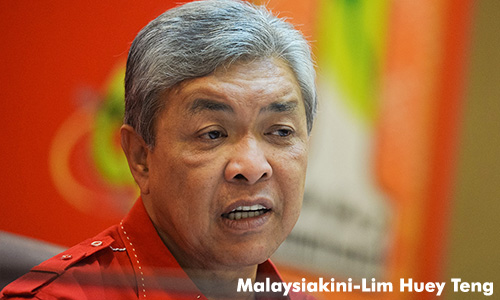 Zahid (photo) now says that he met with several representatives of the RM2.6 billion donor, “hence” the reason he mentioned “plural”.

Let Zahid think through before he speaks. He must not forget that he speaks as deputy prime minister and not any Tom, Dick or Harry.

How many representatives of the RM2.6 billion “donor” did he meet?

Let the truth come out, who were they and when and where was the meeting.

Clearly, Zahid never met with the “donor” let alone the “donors” of the RM2.6 billion “donation”.

Did the MACC meet the “donor” or only his representative, and if so, was he the same person whom Zahid met in August?

Before the Umno/BN government suffers irreparable credibility crisis, Najib must speak up as to who, whether one or more donors, gave the RM2.6 billion “donation”, or Malaysians had been lied to all these months when it was not an individual but a government in the Middle East who gave the donation to sponsor Umno in the 13th general election.

Where's the remainder of RM2.6bil?

3. Where have the RM2.6 billion “donation”, which were made in two deposits into Najib's personal banking accounts in March 2013, gone to?

Have they all be used up for the 13th general election campaign? Former Minister and BN Backbenchers’ Council (BNBBC) chairperson Shahrir Samad (photo) is so far the only person to have confirmed that he had received RM1 million from Najib's RM2.6 billion accounts, while the Deputy Minister for International Trade and Industry Ahmad Maslan has yet to confirm or deny whether he had received RM2 million from Najib for the 13th general election campaign.

Azalina Othman Said, who has been very outspoken recently on Najib's twin mega scandals, should declare whether she received and if so how much, from Najib's RM2.6 billion “donation” accounts for the 13th general election purpose.

What about all the Umno/BN ministers, MPs and leaders who have been beneficiaries from Najib's RM2.6 billion “donation” accounts in the 13th general election?

Shouldn't they own up publicly as to how much they had received and spent, to avoid conflict-of-interest situations? 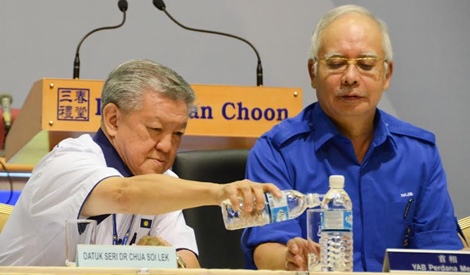 4. How much are left of the RM2.6 billion “donation” after the 13th general election disbursements and where have the rest of the balance gone to?

The exclusive report by The Malaysian Insider yesterday that Umno's financial statement up to Dec 31, 2014, tabled at the Umno annual general assembly, disclosing that the amount of donation and contributions Umno received in the last year only totalled a mere RM82 million, is completely dwarfed by the RM2.6 billion donation in Najib's personal bank accounts.

The Sarawak Report whistleblower website reported on Aug 14 that US$650 million (RM2 billion) was transferred from the Prime Minister’s AmPrivate Bank account in Kuala Lumpur after the 2013 general election and deposited in the name of Tanore Finance Corporation, domiciled in the British Virgin Islands, at Falcon Bank in Singapore.

Najib should clarify the position.

5. More than five months have elapsed. Why have Najib not instituted legal proceedings against the Wall Street Journal (WSJ) for defaming him and his administration?

6. Why have the various government authorities been taking such an inordinately long time to complete investigations into the RM2.6 billion “donation” scandal, when it should be a fairly straight-forward open-and-shut case, considering it involves the prime minister and all the notables in government, who should have no problem about co-operation with the investigating authorities?

Why has it taken the MACC five long months before it recorded a statement from the prime minister on the RM2.6 billion “donation” scandal, when as far back as early July, the then attorney-general Abdul Gani Patail had confirmed that the multi-agency special task force investigating into 1MDB had uncovered documents related to allegations that money was transferred into Najib's personal bank accounts? 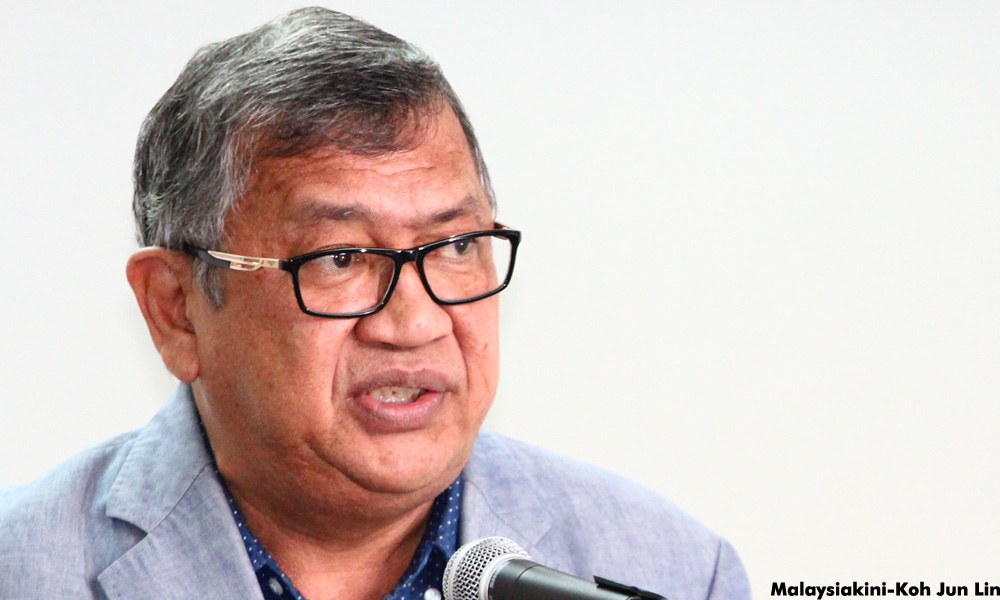 Gani (photo) made this confirmation on the same day as the WSJ publication of its report about the RM2.6 billion “donation” deposited into Najib's personal banking accounts.

This was what Gani said on July 3: “I confirm that I have received documents from the special task force related to 1MDB, including documents related to the allegations of channelling of funds to accounts owned by Prime Minister Najib Abdul Razak.”

On the same day, the special task force raided the offices of three Malaysian companies linked to 1MDB that allegedly were involved in the transfer of funds to Najib's accounts.

7. Were the purges in cabinet and government which started on July 28, resulting in the sacking of Muhyiddin Yassin as deputy prime minister and Shafie Apdal as rural and regional development minister; the sacking of Gani as attorney-general and the appointment of Mohamed Apandi Ali as the new attorney-general; the dissolution of the special task force investigating 1MDB; the “nine-day madness in Putrajaya” with key enforcement agencies warring against each other, and the arrest, 24-hour transfer and general browbeating of key civil servants as in the case of the special task force secretary Jessica Gurmeet Kaur, regarded as too “recalcitrant” for upholding of the rule of law as their top priority and public duty; the three-month derailment of Public Accounts Committee investigations into 1MDB, all related to the twin mega scandals?

8. Is Najib prepared to commission an international police inquiry into the murder of deputy public prosecutor Kevin Morais (photo) following the shock statutory declaration by his brother Charles Morais that Kevin's death may be related to a charge sheet which the Attorney-General’s Chambers was preparing to prosecute Najib for corruption in connection with 1MDB scandal?

There are many questions about the twin mega scandals and it is time that Najib, who is the only one who knows the ins-and-outs, from head to tail, of the two mega scandals, should stand out to answer and to be counted - as it is a task which he cannot delegate to another person, whether Zahid or 1MDB president Arul Kanda Kandasamy.

LIM KIT SIANG is the MP for Gelang Patah and DAP Parliamentary Leader.