ANALYSIS The National Security Council (NSC) that Prime Minister Najib Abdul Razak seeks to establish perhaps should be understood as a tool of ‘self-coup’, not just another piece of draconian law like the Internal Security Act (ISA) or the Security Offences (Special Measures) Act 2012 (Sosma).

A coup is a seizure of power by elites employing unconstitutional or illegitimate means. While most coups are staged by those seeking power, those in power may also stage a ‘self-coup’ against the existing rules of the game to expand or extend their power.

Whose power does Najib intend to usurp with the NSC?

A popular view sees the NSC usurps the power of the Yang di-Pertuan Agong to declare emergency under Article 150 of the federal constitution.

For those who believe in interventionist monarchy, or at least harbour hope for a pro-democracy monarch like Spain’s Julian Carlos I, the Agong can choose not to sign the Proclamation of Emergency.

And some would claim that the Emergency (Essential Powers) Ordinance No 1, 1969, was proclaimed on May 15, 1969, without the signature of the then Yang di-Pertuan Agong, Tuanku Ismail Nasiruddin Shah. His Majesty signed the subsequent ordinances, including the second one which created the National Operations Council (Mageran).

Never mind how such a monarchical defiance may make a difference, some count on that as a check-and-balance act.

However, if we remember Articles 30 and 40 of the federal constitution, it is clear that the Agong has only discretion on two matters - determining the prime ministerial candidate after election or when vacancy emerges, and, deciding whether to approve the prime minister’s request to dissolve Parliament.

Unless otherwise stipulated by the constitution or parliamentary legislations, all other executive powers vested in the Agong are to be exercised by the cabinet or a minister authorised by the cabinet. This should certainly include his power as the supreme commander of the armed forces (Article 41) and in proclaiming Emergency rule (Article 150).

The constitution does not envisage him to play any check-and-balance role against the elected government in exercising these powers, or there would be a constitutional crisis, in the sense of a royal coup.

So, whose power will be usurped by the NSC?

The answer is obviously the cabinet's, which exercises the Agong’s executive authority in most aspects.

(Yes, Sabah, Sarawak and Johor nationalists and separatists please take note, ‘territorial integrity’ is in the list, and your state can be declared a ‘security area’ on that ground when necessary.)

This means the power to formulate policies and strategic measures on this wide range of policy realm and to coordinate their implementation is effectively transferred from the cabinet - theoretically accountable to the Parliament - to this eight-person body called NSC, which will meet at least once in every three months (Section 7).

That power of the cabinet being usurped will not concern most Malaysians. After all, the cabinet is arrogant and has never been accountable to the Parliament, and the government backbenchers are so sheepish and simply impotent for any backbench revolt, even after 2008.

So, why should we care if powers are taken away from all but five ministers (including the prime minister) if ministers themselves don’t care?

The answer lies in the composition of NSC.

The NSC is not just an oligarchy of top politicians, who collectively control all coercive and manipulative apparatus necessary to rule the population.

These top politicians will effectively share their power on the extensively-defined security matters with the heads of some 1.4 million civil servants (chief secretary to the government), some 120,000 soldiers (chief of defence forces), and some 110,000 police personnel (inspector-general of police).

It would be an oligarchy of top elected politicians and heads of three key unelected institutions. This is certainly different from a military junta but it is certainly not full civilian rule under parliamentary government.

The picture looks even more alarming when we move to how ‘security areas’ (Section 18, the NSC Bill) would be run.

With complete flexibility in size, a declared ‘security area’ can be anything, from a village to a cluster of states.

While it gives an impression that the de facto emergency rule will take a partial or a local character, one should not forget the possibility in the other extreme - the entire Malaysia is carved into 10-20 security areas, replacing the state and local governments.

‘Government entities’ are defined to include (a) “any ministry, department, office, agency, authority, commission, committee, board of council of the federal government, or any of the state governments, established under any written law or otherwise”; (b) ‘any local authorities’; and (c) ‘the security forces’ (Section 2).

If this specific qualification on director-general and his/her deputies is to give a pretence of civilian rule, such qualification is not required of the director of operations who runs the security area.

Now, do all these sound like military government at the state/local level for you? Do you still think the NSC is really established to fight terrorism?

What may happen in the ‘security areas’?

What can the ‘militarised de facto sub-national governments’ do?

Meanwhile, members of the security forces may arrest, search and seize without warrants (Sections 25 and 26). They are supposed to use ‘reasonable and necessary force’ to protect lives or to protect the security area. Very interestingly, it specifically prohibits the use of such force to ‘subject the person to greater indignity than is reasonable and necessary in the circumstances’ (Section 34), suggesting that torture a la Guantanamo Bay and Abu Ghraib at some moderate dose may be permissible.

What happens when casualties - whether of members of security forces or of others - take place? Magistrates are given the power to ‘dispense with the holding of a death inquiry or inquest on the dead body’ (Section 35). 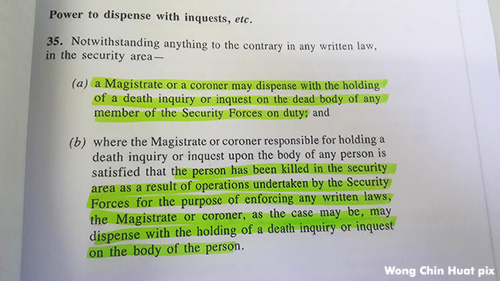 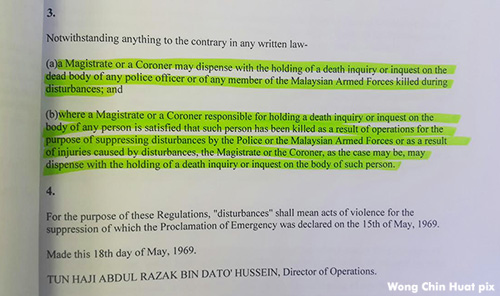 In any case, members of the NSC and its subsidiary committees, directors of operations, members of the security forces and personnel of other government entities, are protected from civil and criminal actions on ‘any act, neglect or default done or omitted by it or him in good faith in such capacity’ (Section 38). 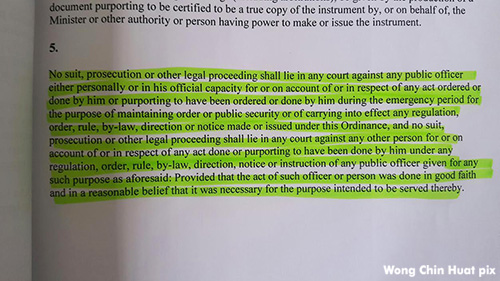 Most alarmingly, the provision in Section 38 is actually not restricted to the operations of security areas. The prime minister and other members of the NSC and its subordinate units can claim impunity for actions carried out in the name of NSC.

How similar is the NSC to the National Operation Councils (Mageran) set up and headed by Najib’s father Abdul Razak Hussein in the aftermath of the May 13 ethnic riot?

A major difference is that the Mageran was set up with the Proclamation of Emergency, following a serious riot as an ad hoc body while the NSC is a permanent body. The Mageran was also laid out as an assisting body to the director of operations (then the title for the de facto national top leader) who decided its members in absolute discretion and included a non-minister politician (MCA president).

This explained why Mageran was formed as late as June 24, 1969, when Razak had already acquired the supreme power by May 17, 1969. In contrast, the NSC looks more ‘normal’, with all eight members specified.

Detention without trial was permitted under the Emergency (Public Order and Prevention of Crime) Ordinance No 5, 1969, with the length varying by officers making the order from 24 hours for an inspector to two years by the home minister.

The NSC Bill does not provide for detention without trial but that can happen under other laws such as the Security Offences (Special Measures) Act 2012, which allows for detention up to 29 days including the first 24 hours.

However, focusing on these differences would be missing the wood for the trees.

First, both the Mageran and the NSC are oligarchies of top politicians and heads of non-elected institutions. One may even say the designer of NSC copies the line-up from Mageran, consisting of the home minister; MCA president; works, post and telecoms minister; information and broadcasting minister; chief of armed forces staff; inspector-general of police; and permanent secretary of the foreign affairs ministry.

Second, both suspend human rights and rule of law, with the very similar provisions for legal immunity for public officers and dispensation of inquests.

Will GE14 be suspended?

Whether the May 13 riot was orchestrated or not, the transfer of power to the director of operations (Abdul Razak Hussein) who ‘ruled in council’ with Mageran was a coup - a ‘palace coup’ against Tunku Abdul Rahman and a ‘self-coup’ for Umno to halt its electoral decline, after the Alliance lost 9 percentage points of votes in the peninsula to PAS.

The 1969 self-coup rewrote the rules of the game for Malaysia’s politics, economy, and society, producing the electoral one-party state which has been in decline since 2008.

For 2016, the self-coup would be complete once the NSC is established. It will be obvious only when the tool is put to use.

The ultimate question to ask on the NSC is simply this: Will ‘security areas’ be declared, on opposition strongholds if not nationwide, before the 14th general election (GE14) outcome is out, if signs show a slim victory - in seats, not just votes - for the opposition?

If Najib is to stay in power with martial law partially imposed, can multi-ethnic and multi-religious Malaysia survive the catastrophe? Can we do better than Thailand under military rule?

The next questions to ask are: Isn’t the market most sensitive to political risks? Why did the markets register no shock at all on Dec 4 after Najib pushed through his self-coup vehicle in the Dewan Rakyat? Are the market analysts waiting to see soldiers marching on the streets to be alarmed?

Najib’s self-coup is a silent one. And the silence of the market is deafening till today.

WONG CHIN HUAT earned his PhD on the electoral system and party system in West Malaysia from the University of Essex. He is a fellow at the Penang Institute, and a resource person for electoral reform lobby, Bersih.