Home Minister Ahmad Zahid Hamidi has confirmed that the Malaysian immigration records of murdered Mongolian national Altantuya Shaariibuu had not been deleted, as was alleged previously.

"Police have investigated the immigration records of the deceased Altantuya Shaariibuu through the Immigration Department and found the records in the system.

"With that, there is no such issue as the (immigration) records being deleted by anyone," Zahid ( photo ), who is also deputy prime minister, said in a written parliamentary reply. 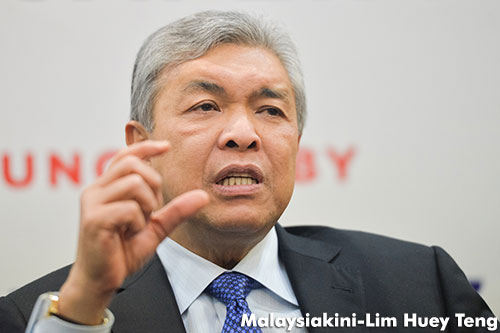 This was in response to a question asked by Indera Mahkota MP Fauzi Abdul Rahman, who queried whether the police have probed into the claims of the deleted immigration records, as well as the status of the probe.

The home minister's reply answers previous allegations that the Malaysian immigration records of Altantuya had been deleted by unknown individuals.

The Altantuya murder, which occurred in 2006, saw Prime Minister Najib Abdul Razak - who was then deputy prime minister and defence minister - being accused of involvement.

His close associate Abdul Razak Baginda, who admitted to having an affair with Altantuya, was charged with abetting the murder but was later acquitted without his defence being called.

The police, meanwhile, have cleared Najib of any wrongdoing and Najib was also reported to have sworn his innocence in the name of God.

The confirmation by Zahid comes more than eight years after Altantuya's father Setev Shaariibuu queried about the missing entry records.

The allegations first emerged during the trial of Abdul Razak in June 2007, based on the testimony by Uuriintuya Gal-Ochir, a friend of Altantuya.

This is what the late Karpal Singh told reporters at the time: "It is a very pertinent and significant issue because if any attempt was made to show that Altantuya never entered the country and therefore could not have been murdered, then I think the police ought to investigate why."

The case had been further linked to Malaysia’s procurement of two French Scorpene submarines, which Abdul Razak’s firm was tasked with purchasing and maintaining.

Former police commando Sirul Azhar Umar was convicted of Altantuya's murder, and had been sentenced to death.

He fled to Australia, where the Malaysian government is currently trying to extradite him.

However, Australian law dictates that a person facing the death penalty in his or her home country cannot be sent back to face prosecution.