Malaysia has been named among the world’s six “worst corruption scandals of 2015”.

The unenviable honour was bestowed by foreignpolicy.com – a division under the Washington Post Company – in its report two days ago.

The report stated how massive corruption scandals had embroiled world leaders, high court judges, as well as the men who run the world’s soccer industry, among others.

Malaysia was placed at number three, however, behind the Federation Internationale de Football Association (Fifa) and Nigeria for corruption scandals. 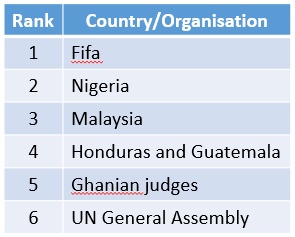 Honduras and Guatemala shared the fourth place, while Ghanaian judges and the UN General Assembly were at fifth and sixth places.

The report pointed out how US President Barack Obama had arrived in the middle of an “awkward corruption scandal” when he visited Malaysia last month.

This is because four months prior, The Wall Street Journal had reported that US$700 million (RM2.6 billion then) was deposited into Prime Minister Najib Abdul Razak’s personal bank accounts.

The US$700 million, claimed to be from state funds, had tied Najib directly to a probe into his brainchild – 1MDB.

Commenting on this report, DAP veteran Lim Kit Siang exclaimed how this was definitely a “shame of shames”.

“Can Malaysians expect the prime minister, who has brought such unprecedented dishonour at the global level to Malaysia, fully defend himself in his 2016 New Year message tonight?” asked Lim in his statement today.