Inspector-general of police Khalid Abu Bakar has ordered the elite Police Cyber Investigation Response Centre (PCIRC) to probe and neutralise the grave defacement threat against the image of a national leader.

Khalid, well known for his Twitter policing escapades, issued the directive after he was alerted to the supposed threat to Prime Minister Najib Razak'dignity and image by Twitter user @DStarscreamx via another message on the micro-blogging service. 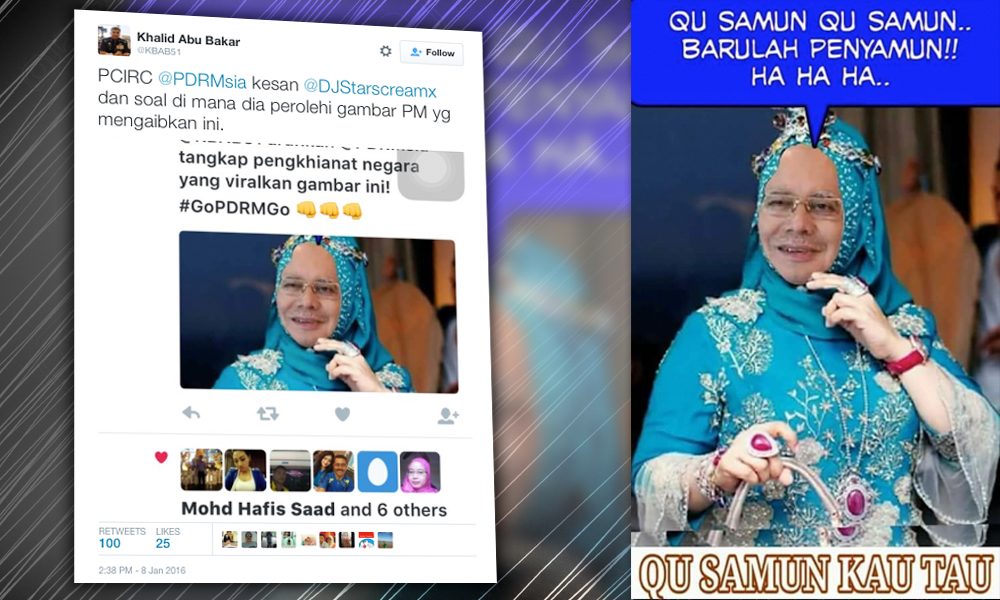 Based on the responses to his tweet, @DJStarscreamx, which by the way seems to be based on a character from 'Transformers', the annoying Decepticon Starscream which can transform into a jet fighter, has received accolades and respect from like-minded Twitter users who were impressed that he had managed to galvanise the IGP into action over the matter.

In the picture which seems to have been manipulated via editing software, the picture of beauty magnate Azmiza Othman, more well known as Datuk Vida, has had her face cropped out and replaced with a visage of our supreme head of the executive, Najib.

The end result is a picture which seemed to be of Najib wearing the controversial Qu Puteh empire founder's headscarf and tiara and playful poise.

To add insult to injury, the perpetrator of this act of alleged defacement, added the phrase: "Qu Samun! Qu Samun! Barulah Penyamun" in a speech bubble to the edited photo, a corruption of the Qu Puteh product tag line."Qu Puteh! Qu Puteh! Barulah Putih".

This is not the first time that Malaysia's law enforcement has been ordered to act when attempts were made to ridicule Najib online, and several Malaysian netizens have paid a heavy price for their parody.

Najib has faced extreme ridicule and criticism from the public for his supposed involvement in various national scandals, like the RM2.6 billion 'donation' he admitted to have received into his personal accounts, as well as the alleged mismanagement of 1MDB funds.

Authorities, however, have moved to crack down on dissent to his continued stay in the PM's chair, while his own party Umno has taken action against its own members and leaders who asked too many questions.