In the busy Selayang wholesale market, the narrow alleys are lined with rusty rain-streaked two-storey buildings.

This is where as many as 10,000 Rohingyas have made a home for themselves after fleeing persecution in Myanmar.

There are about 150,000 Rohingyas in Malaysia alone, most living here illegally, and often without refugee status. Just above 50,000 are registered with the United Nations Refugee Agency (UNHCR) in Malaysia. 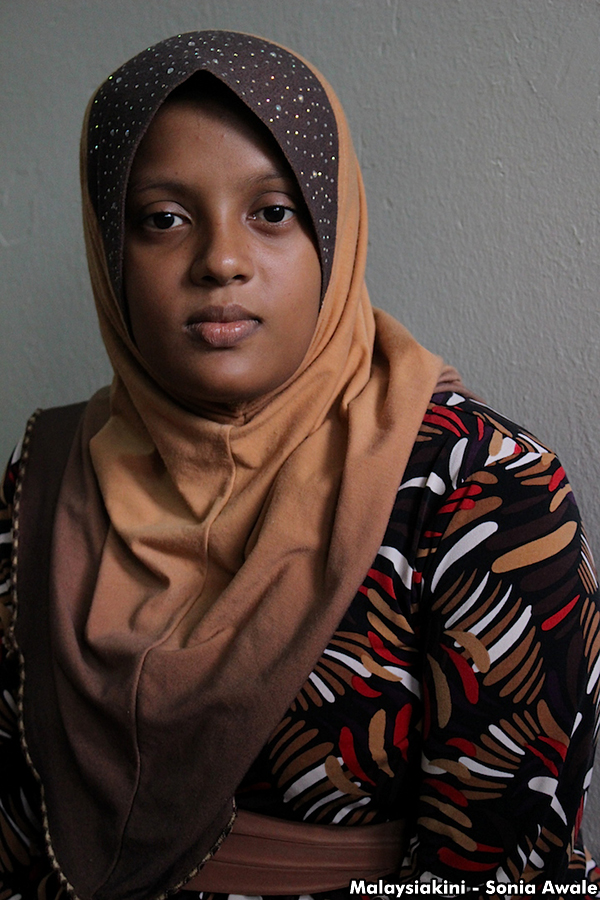 Some have been here for decades, living in Malaysia without any legal status.

“I’m a Rohingya but I consider myself a Malaysian,” says a smiling 19-year-old Hamida Mohamed Yosuf ( photo ).

She was born and brought up in Terengganu, along with eight other siblings, after her parents left Myanmar over 30 years ago.

Hamida can speak and read Bahasa Malaysia fluently, lives in a modest house with her parents, husband, a toddler son, and a brother, in a household with a relatively steady income.

Her story is one that inspires hope among the Rohingya community eking out a living in Malaysia.

The arduous journey of Rohingyas

Their journey started in the 1980s when her father Noor Mahamad fled Myanmar.

The mass exodus of Rohingya people from Rakhine state in Myanmar began when the government ejected some 250,000 of them to neighbouring Bangladesh.

The Buddhist-dominated government considers the Muslim Rohingya to be illegal Bangladeshi settlers. It has been accused of oppressing the minority group, if not engaged in active ethnic-cleansing.

Since then, large numbers of the Rohingya people have fled and made it to Thailand, Malaysia and Indonesia.

“Soldiers came to my village and rounded us up; they were armed with weapons. I was young at the time, so I fled to Thailand,” recalls Noor, now 50. “They (soldiers) wanted to get rid of Muslims.”

He left his village in 1988 and from Yangon, he hitched a ride on a lorry to Thailand. There, he met his future wife, Maryam, who had also fled Myanmar with her parents.

He stayed in Thailand for only a month, and joined his friends who had asked him to leave with them for Malaysia. After a gruelling seven-day journey, he arrived in Malaysia. 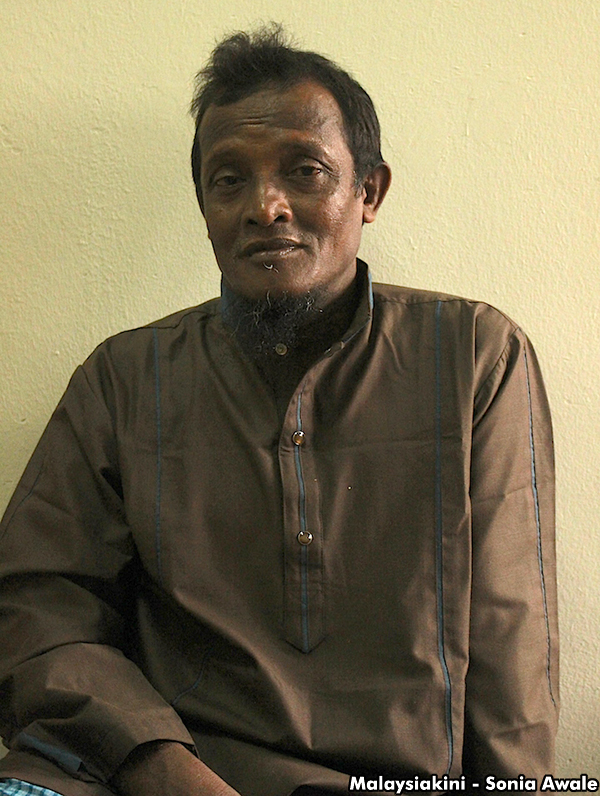 “I came to Malaysia because it is a Muslim country,” says Noor ( photo ). The first place he settled in was Kota Bharu, Kelantan.

But it wasn’t until three years later in 1992, after having moved to Kemaman, Terengganu, and working as a general contractor, that he started having some semblance of a proper life.

Soon after though, he was caught by authorities and sent to Golok, Thailand, just across the border. But he managed to sneak back into Malaysia.

“I like living in Malaysia. It is easy to find work there; we could make a living,” he says.

All of his nine children were born in Malaysia. He now lives in Kuala Lumpur with his family and works as a grass cutter.

He says he knows he is lucky compared to many of his Rohingya compatriots who face horrors everyday back in Myanmar, or in flimsy boats on the high seas.

Noor attributed his good fortune to God’s kindness and the help of concerned locals.

Still, life is hard, healthcare is expensive, jobs aren’t easy to come by, and education remains out of reach.

Hamida is pregnant with her second child and is expected to give birth in March, but she is worried about the impending hospital bill.

“I was told to deposit RM2,000 if I wanted to give birth in a government hospital. But I hear it will get more expensive,” she says pensively.

Refugees have no guaranteed access to healthcare in Malaysia and they have to bear all the medical costs, from doctor’s fee to medicines.

Last year, the Malaysian government retracted the subsidies in medical fees it provided to non-citizens, and hiked the cost of medical care for non-nationals by 30 percent.

The Ministry of Health also puts a limit on prescription drugs for non-Malaysians, arguing that the increasing number of foreigners seeking healthcare at government hospitals would lead to a rise in government expenditures.

This will make it even more difficult for Rohingyas to get proper health care.

According to Refugee International’s latest field report on Rohingyas in Malaysia, many of them have to borrow money or are forced to leave their newborns at hospitals until they can pay the maternity fee, which can range between RM1,500 to RM6,000. 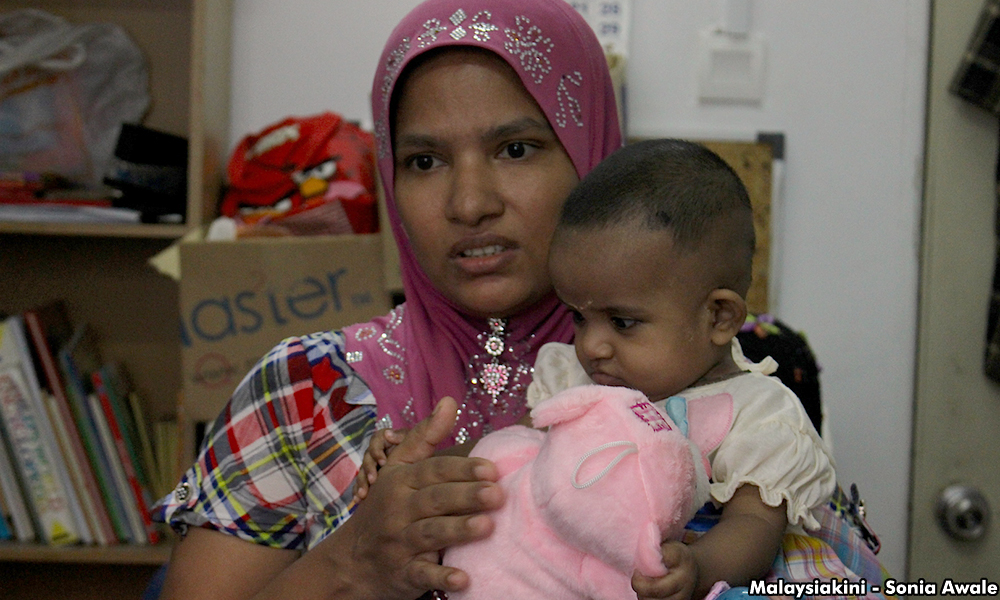 “I had to deposit RM2,500 to give birth. My husband barely earns RM30 per day,” laments 26-year-old Nurul ( photo ), Hamida’s neighbour, who came to Malaysia three years ago.

“I didn’t have money, I had to borrow but I still haven’t paid off my debts,” she lamented.

Refugees with the coveted UNHCR card can access healthcare services at 50 percent discount. Many do not possess the refugee credentials, but for those who do have the card issued by the UN refugee agency, it is godsend.

Odd jobs or no job

Hamida’s husband is out most days, working odd jobs like painting houses, welding, cleaning homes, and is paid about RM50 or RM60 per job.

“That helps to keep the household afloat,” says the ever-positive Hamida.

Nur Islam, Hamida’s older brother, says, “I used to contribute too. I was paid RM30 to RM40 for each job, but that was before my accident.” 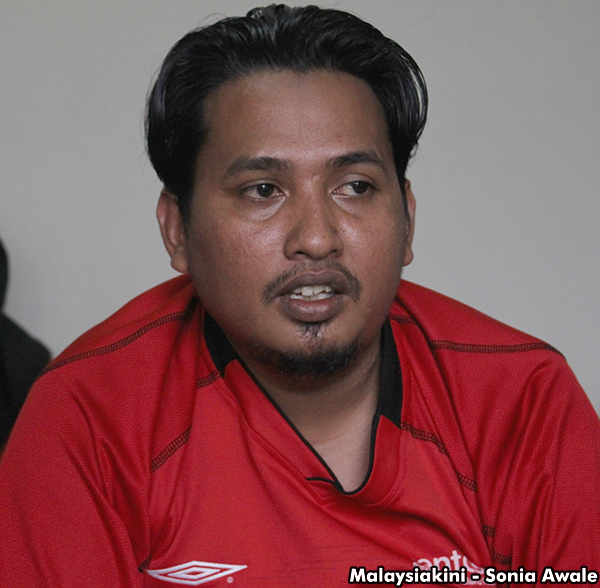 Nur ( photo ) worked as a labourer at construction sites until two years ago when he was hit by a car while riding a motorbike to work. The accident left him paralysed in the left arm and he was unable to work since.

It is illegal for Rohingya refugees to work in Malaysia, and they have no work permits. Even those registered with UNHCR can’t work, but there are workplaces which hire Rohingyas with UNHCR cards.

Most of these are low-waged unskilled jobs where many are exploited but for most refugees, even these jobs are better than nothing.

“It was hard to get a job, you need education to get a good job, but I got menial jobs. If you get a kind boss, it’s okay. But if you’re unlucky, bosses run away without paying,” says Nur.

Unlike most, their father, Noor, holds a steady job. He has a full-time position as a grasscutter and earns RM1,200 per month, which is almost unheard of among the refugees.

He pays a monthly rent of RM500 for their house and is the breadwinner of their family of eight.

Says Noor: “I must say it is the kindness of local people who sympathise with us that made it all possible.”

SONIA AWALE, an intern with Malaysiakini , hails from Nepal and is pursuing her Masters of Journalism at the University of Hong Kong.