The target of Prime Minister Najib Abdul Razak’s administration for Malaysia to be in the top 30 countries in Transparency International’s Corruption Perception Index (CPI) seems nothing but a ‘pipe dream’.

DAP parliamentary leader Lim Kit Siang said Najib’s dream would be impossible, citing the CPI ranking and score for the 177 countries and the 21-year series of the CPI.

“There is no reason or ground for anyone to believe that the target of Malaysia being ranked in the top 30 of the CPI in 2020 is a realistic or achievable one,” Lim said in a statement today.

Therefore, Malaysia faced the risk of being overtaken by China and even by Indonesia (which had been at the bottom of the CPI in 1995) in both the CPI ranking and score within a decade.

“(This is) unless Malaysia quickly bucks up and shows its seriousness on the anti-corruption front,” Lim, the MP for Gelang Patah, added.

In the latest CPI ranking for 2015 revealed last week, Malaysia saw itself drop four places, compared with the previous year. The country's overall score also slipped from 52 in 2014 to 50 in 2015. 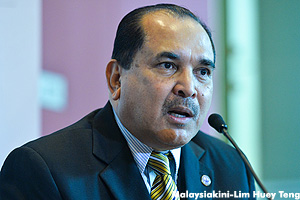 Transparency International-Malaysia (TI-M) president Akhbar Satar ( photo ) explained that among the reasons (for the decline) were the 1MDB affair, the RM2.6 billion donation issue and the transfer of and raid on Malaysian Anti-Corruption Commission (MACC) officers.

To reverse the trend of Malaysia being overtaken by other countries in the fight against corruption, Lim believes that this must start with the prime minister’s full and satisfactory accountability on his “world-class twin mega scandals”.

“The attorney-general’s rejection of the MACC investigations and recommendations and exoneration of Najib of any crime or wrongdoing in the RM2.6 billion donation and RM42 million SRC International scandals have convinced the overwhelming majority of Malaysians that they cannot get to the bottom of the Najib scandals from the ordinary government investigation and enforcement agencies and processes,” Lim said.

The only option left would be to set up a Royal Commission of Inquiry (RCI) to conduct a public inquiry into Najib’s scandals.

“Nobody expects the truth to be revealed if the matters are left solely to normal government investigation and enforcement agencies, or even to the parliamentary Public Accounts Committee (PAC) under a “cari makan” chairman.

“Therefore, the time has come for a national campaign to demand an independent RCI into Najib’s scandals," Lim added.